The 2003 invasion of Iraq had many casualties, not the least of which was the collective memory of a nearly 5,000-year-old civilization, stretching from ancient cuneiform on clay tablets to the voluminous personal records of Saddam Hussein's secret police.

In the second issue of the magazine Document Journal, art historian Zainab Bahrani gives a first-hand account of the destruction of the National Library and State Archives of Iraq, an institution that collected thousands of historical documents, legal papers, manuscripts, clay tablets.

In the spring of 2003, the building housing the library and archives was left in rubble. All that remained were "burned books transformed to ashes, drenched and pulverized fragments of documents scattered on the ground," Bahraini writes.

In 2003 and 2004 while working on the preservation of cultural heritage in Iraq, I first encountered the destroyed remains of the National Library and State Archives, an institution which is equivalent to the Library of Congress in the United States. The war had induced in me a fixation, a type of archive fever that led me to Iraq in the first two years of occupation, where I had hoped to do whatever I could to save what remained of monuments, archaeological sites and museum collections after the destruction of the 2003 ground war. When I arrived in Iraq I quickly realized that I shared this archive fever with the head of the National Library, Dr. Saad Eskander, and with a number of other Iraqi intellectuals, students and museum professionals, each of whom applied her or himself as if driven by some Medieval genie let out of a bottle from the One Thousand and One Nights. We had in common a reckless obsession with preserving history, things and documents. Many told us we were misguided, that we should not focus on inanimate things when people were dying, but we saw these forms of annihilation as two sides of the same coin.

The first two years of war and occupation were a violent time of horrendous destruction. I remember driving through the streets of Baghdad searching for any buildings still standing that we might re-appropriate for housing what remained of the collections of the library, since the library building itself had turned to ruins. At one point, the remains of mildewing historical papers had to be kept frozen so that continuing damage could be stalled until conservators could come, and proper paper conservation methods applied. Dr. Eskander had found an abandoned freezer in the kitchen of bombed-out remains of the private club where formerly the Baathist elite officers had gathered for an evening’s entertainment. There was of course no electricity, so he acquired a generator to keep the freezer going, and hired a guard to stand in front of the generator. The remains of the Ottoman archive, the history of Iraq for over 400 years, were for a time stored in this bombed building, held together by an old kitchen freezer. This is the kind of bricolage and creative thinking that went into the conservation work of people like the director of the National Library, when little help came from the outside world and from the occupying authority. There are many such stories to tell about heroic efforts by what remained of the Iraqi scholars and intellectuals in the first years of the war. Hundreds of university professors and intellectuals were also assassinated in those years, and, like other Iraqi War dead, no official record has been kept of their deaths.

The Baathist secret police archive was airlifted out of Iraq by U.S. forces, and is now housed in the Hoover Institute at Stanford University. Destruction of archives incites a collective amnesia, an eradication of memory by means of erasing its documentary and historical apparatus, consigning it to the flames. Because of the destruction of documents and the record of the history of kinship and ties to place that all the peoples and religions of Iraq have, those who wish to incite ethnic hatred and religious intolerance can rewrite history as they please. When documents are confiscated by foreign powers the result is similar; without them there can be no reconciliation for Iraq, and there can be no peace.

The rest of Bahrani's incredible story can be read in the Spring/Summer Issue of Document Journal, which is soon to be released, or surf to the Document website.

Take a look at some impressive photos of the destroyed library in the slideshow below.

PHOTO GALLERY
Destruction Of The National Library Of Iraq 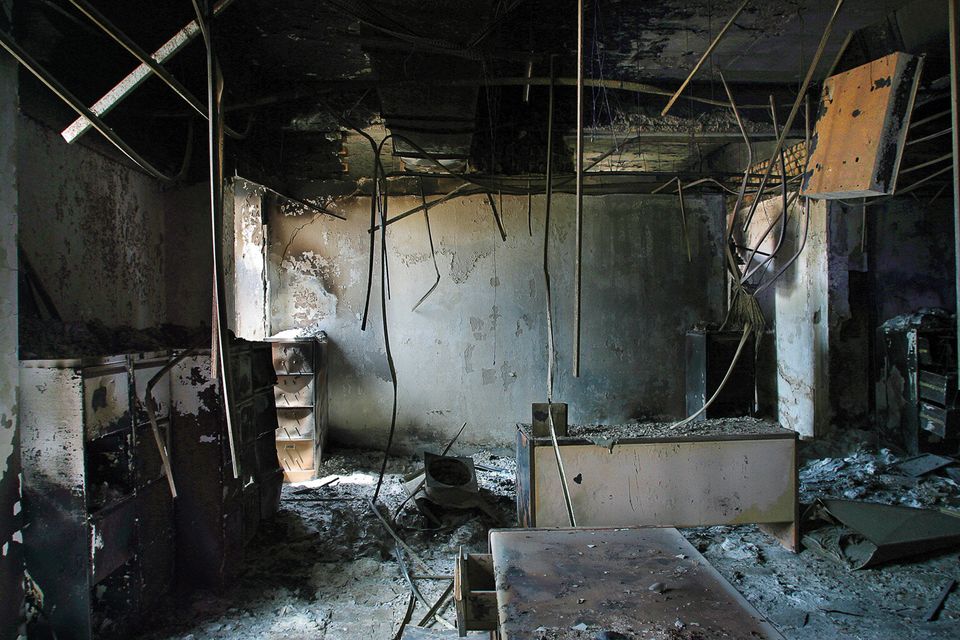