As the war in Iraq enters its sixth year, Christopher Cerf and Victor Navasky have published a "definitive, footnoted, hilarious but depressing compilation of experts who were in error" about the war from the beginning. You can read more about the book -- "Mission Accomplished! Or How We Won The War In Iraq" -- here.

Below, an excerpt from the chapter titled "Their Finest Hour: America Readies Itself To Free The Iraqi People."

"I believe demolishing Hussein's military power and liberating Iraq would be a cakewalk."
- Kenneth Adelman, member of the Pentagon's Defense Policy Board, 2/13/02

"Support for Saddam, including within his military organization, will collapse after the first whiff of gunpowder."
- Richard Perle, Chairman of the Pentagon's Defense Policy Board, 7/11/02

"Desert Storm II would be in a walk in the park... The case for 'regime change' boils down to the huge benefits and modest costs of liberating Iraq."
- Kenneth Adelman, member of the Pentagon's Defense Policy Board, 8/29/02

"Having defeated and then occupied Iraq, democratizing the country should not be too tall an order for the world's sole superpower."
- William Kristol, Weekly Standard editor, and Lawrence F. Kaplan, New Republic senior editor, 2/24/03 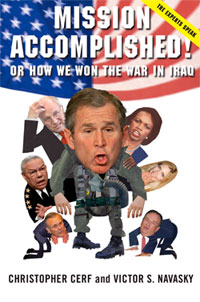 HOW MANY TROOPS WILL BE NEEDED?

"I would be surprised if we need anything like the 200,000 figure that is sometimes discussed in the press. A much smaller force, principally special operations forces, but backed up by some regular units, should be sufficient."
- Richard Perle, Chairman of the Pentagon's Defense Policy Board, 7/11/02

"I don't believe that anything like a long-term commitment of 150,000 Americans would be necessary."
- Richard Perle, speaking at a conference on "Post-Saddam Iraq" sponsored by the American Enterprise Institute, 10/3/02

"I would say that what's been mobilized to this point -- something on the order of several hundred thousand soldiers are probably, you know, a figure that would be required."
- Gen. Eric Shinseki, testimony before the Senate Armed Services Committee, 2/25/03

"The idea that it would take several hundred thousand U.S. forces, I think, is far from the mark."
- Donald H. Rumsfeld, U.S. Secretary of Defense, 2/27/03

"I am reasonably certain that they will greet us as liberators, and that will help us keep [troop] requirements down. ... We can say with reasonable confidence that the notion of hundreds of thousands of American troops is way off the mark...wildly off the mark."
- Paul Wolfowitz, U.S. Deputy Secretary of Defense, testifying before the House Budget Committee, 2/27/03

"It's hard to conceive that it would take more forces to provide stability in post-Saddam Iraq than it would take to conduct the war itself and to secure the surrender of Saddam's security forces and his army. Hard to image."
- Paul Wolfowitz, U.S. Deputy Secretary of Defense, testifying before the House Budget Committee, 2/27/03

"If our commanders on the ground say we need more troops, I will send them. But our commanders tell me they have the number of troops they need to do their job. Sending more Americans would undermine our strategy of encouraging Iraqis to take the lead in this fight. And sending more Americans would suggest that we intend to stay forever, when we are, in fact, working for the day when Iraq can defend itself and we can leave."
- President George W. Bush, 6/28/05

"The debate over troop levels will rage for years; it is...beside the point."
- Rich Lowry, conservative syndicated columnist, 4/19/06

"Oh, no, we're not going to have any casualties."
- President George W. Bush, response attributed to him by the Reverend Pat Robertson, when Robertson warned the president to prepare the nation for "heavy casualties" in the event of an Iraq war, 3/2003

"Why should we hear about body bags and deaths? Oh, I mean, it's not relevant. So why should I waste my beautiful mind on something like that?"
- Barbara Bush, former First Lady (and the current president's mother), on Good Morning America, 3/18/03

"I think the level of casualties is secondary... [A]ll the great scholars who have studied American character have come to the conclusion that we are a warlike people and that we love war... What we hate is not casualties but losing."
- Michael Ledeen, American Enterprise Institute, 3/25/03

HOW MUCH WILL IT COST?

"Iraq is a very wealthy country. Enormous oil reserves. They can finance, largely finance the reconstruction of their own country. And I have no doubt that they will."
- Richard Perle, Chairman of the Pentagon's Defense Policy Board, 7/11/02

"The likely economic effects [of the war in Iraq] would be relatively small... Under every plausible scenario, the negative effect will be quite small relative to the economic benefits."
- Lawrence Lindsey, White House Economic Advisor, 9/16/02

"The costs of any intervention would be very small."
- Glenn Hubbard, White House Economic Advisor, 10/4/02

"When it comes to reconstruction, before we turn to the American taxpayer, we will turn first to the resources of the Iraqi government and the international community."
- Donald H. Rumsfeld, U.S. Secretary of Defense, 3/27/03

"There is a lot of money to pay for this that doesn't have to be U.S. taxpayer money, and it starts with the assets of the Iraqi people. We are talking about a country that can really finance its own reconstruction and relatively soon."
- Paul Wolfowitz, U.S. Deputy Secretary of Defense, testifying before the Defense Subcommittee of the House Appropriations Committee, 3/27/03

"The United States is committed to helping Iraq recover from the conflict, but Iraq will not require sustained aid."
- Mitchell Daniels, Director, White House Office of Management and Budget, 4/21/03

"Iraq has tremendous resources that belong to the Iraqi people. And so there are a variety of means that Iraq has to be able to shoulder much of the burden for ther own reconstruction."
- Ari Fleischer, White House Press Secretary, 2/18/03

HOW LONG WILL IT LAST?

"The idea that it's going to be a long, long, long battle of some kind I think is belied by the fact of what happened in 1990. Five days or five weeks or five months, but it certainly isn't going to last any longer than that."
- Donald H. Rumsfeld, U.S. Secretary of Defense, 11/15/02

"I will bet you the best dinner in the gaslight district of San Diego that military action will not last more than a week. Are you willing to take that wager?"
- Bill O'Reilly, 1/29/03

"It is unknowable how long that conflict will last. It could be six days, six weeks. I doubt six months."
- Donald H. Rumsfeld, U.S. Secretary of Defense, 2/7/03

"It won't take weeks... Our military machine will crush Iraq in a matter of days and there's no question that it will."
- Bill O'Reilly, 2/10/03

"There is zero question that this military campaign...will be reasonably short. ... Like World War II for about five days."
- General Barry R. McCaffrey, national security and terrorism analyst for NBC News, 2/18/03

"The Iraq fight itself is probably going to go very, very fast. The shooting should be over within just a very few days from when it starts."
- David Frum, former Bush White House speechwriter, 2/24/03

"Our military superiority is so great -- it's far greater than it was in the Gulf War, and the Gulf War was over in 100 hours after we bombed for 43 days... Now they can bomb for a couple of days and then just roll into Baghdad... The odds are there's going to be a war and it's going to be not for very long."
- Former President Bill Clinton, 3/6/03

"I think it will go relatively quickly...weeks rather than months."
- Vice President Dick Cheney, 3/16/03