President Obama has admitted the lack of a complete strategy for war-torn Iraq. This is true in more ways than one. Food aid for starving Iraqis is being tragically overlooked.

The UN World Food Programme (WFP) is being forced to reduce rations for some Iraqi war victims because of low funding. If WFP does not get more funding soon, food aid for 1.8 million displaced Iraqis may come to a halt. 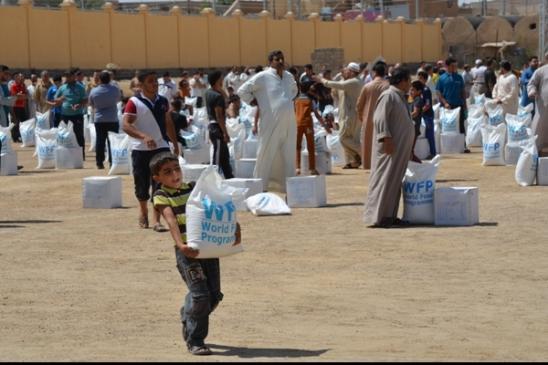 The UN World Food Programme feeds displaced Iraqis. But the UN food agency is running out of funds and needs donations from governments and the public. (WFP Iraq photo)

Nearly 3 million Iraqis have been forced from their homes since the war with ISIS began last year. These are civilians who have lost their livelihoods and food supply. They depend on humanitarian aid.

As battles continue to unfold between ISIS and the Iraqi Security forces, more civilians are caught in the middle. The Ramadi District in Iraq's western Anbar Governorate is where the fiercest fighting has been taking place.

Some areas, such as Haditha City, are blocked off by the fighting and have almost no food supply. Iraqi civilians have been desperately trying to flee the conflict zones of Anbar. They are having to make this perilous journey in the scorching heat.

The people currently trapped at checkpoints are either sheltering in a camp, which is lacking food, water, and medical supplies, or are living in the open air with little access to any emergency assistance at all. Civilians trapped behind the conflict line in and around Ramadi have essentially no access to assistance."

The Norwegian Refugee Council, in partnership with WFP, is rushing emergency food and other supplies to these displaced persons. Along with UNICEF they are part of the Rapid Response Mechanism that quickly responds to emergencies that unfold daily in this war zone.

But, while this humanitarian disaster unfolds, relief agencies are lacking funds. WFP relies entirely on voluntary donations to feed the Iraqis. Not nearly enough has come in from the international community. Iraqis will be left to starve unless donations pick up. 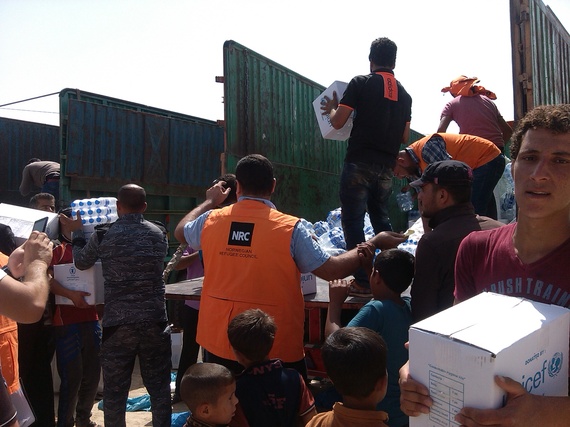 The UN food agency states, "Funding for WFP's operations in Iraq has reached critical levels and US$150 million is urgently needed to continue to reach people with assistance for the rest of this year."

Catholic Relief Services (CRS), which is aiding displaced Iraqis in Kurdistan, is also urging more funding for the relief of war victims. Kim Pozniak, a CRS representative in Iraq, says,

The needs of displaced families in Iraqi Kurdistan right now is great, and ranges from safe and adequate shelter to food, water and sanitation...there needs to be a lot more funding to assist all of the displaced population in this area and elsewhere in Iraq, especially if the number will increase in the near future. CRS is calling on the U.S. and the international community to robustly fund the humanitarian response here in Iraq, especially since there seems no end in sight of this crisis.

Where there is war, there is hunger. The conflict with ISIS is no exception.

The hunger crisis in Iraq, combined with the food shortages in Syria, is one of the largest humanitarian emergencies since World War II.

U.S. leadership is needed to stop a severe hunger emergency from unfolding in Iraq. It's vital the Congress increase funding for the Food for Peace initiative. This is the main program of the United States for fighting hunger abroad. In addition, the U.S. must encourage and coordinate donations from all capable nations to feed Iraq and other areas in distress.

While a strategy for peace in Iraq is still being formed, we already know one ingredient. Food will help write the peace in Iraq. For there cannot be any peace or stability with people starving and malnourished. We cannot abandon Iraqis in this time of great distress.