WASHINGTON -- In 2002, during the run-up to the U.S. invasion of Iraq, Secretary of State Colin Powell issued a warning to President George W. Bush about launching a war there. “Once you break it," he said, “you’re going to own it.”

We broke Iraq when we began dropping "daisy cutter" bombs more than a decade ago. And while we don’t “own” Iraq now, we pay a lot of rent in exchange for our position as its ally, protector and arms supplier. After the Iraqis themselves, we remain the key player in determining that country’s fate.

Today, Iraq's future is in doubt. Renewed sectarian violence and rising attacks from al-Qaeda and its affiliates are threatening to tear a barely reassembled Iraq into pieces.

“The situation is fragile,” said a senior State Department official, who spoke to The Huffington Post anonymously so that he could give frank assessments. “Al-Qaeda is now a very serious threat, and the [Iraqi] government needs to be more active in reaching out to all groups.

“Iraq remains important, a key to the region,” he said. “It is certainly not a 'failed state,' but there is a lot of work that needs to be done.”

Not that we haven’t invested heavily -- tragically -- for what most Americans regard as a mistake that did not make us any safer.

The Iraq War was one of the longest, most expensive and controversial in our history. It cost the lives of some 4,500 Americans, at least 135,000 Iraqis (some estimates range significantly higher) and, over the long term, more than $2 trillion to drive Saddam Hussein from power and use military means to “stand up” a replacement.

For most Americans, Iraq disappeared from sight and mind once the last U.S. combat troops left two years ago this month. The Gallup Poll has stopped regularly asking about it. President Barack Obama rarely speaks of it. The visit last month of Iraqi Prime Minister Nouri al-Maliki caused barely a ripple in the current of cable news.

Yet in some ways, Iraq is more important than ever. If it falls apart -- if it becomes the al-Qaeda global base it never was before (Dick Cheney’s dark fantasies of 2002 notwithstanding) -- the result could dash hopes for a semblance of peace and stability in an oil-rich region stretching from Turkey to the Arabian Sea.

We aren’t stuck in Iraq anymore. But we are stuck with Iraq.

That means, among other things, executing an all-too-familiar, shopworn power move: pushing “our” autocratic strongman toward democracy (usually by threatening to withhold arms), but not leaning so hard that his government and society collapse.

“We support additional arms for Iraq,” the State Department official said. Just not all of them right away.

When Maliki came to Washington last month with a military hardware list a mile long, he got the good cop/bad cop treatment from President Obama, Vice President Joe Biden and key foreign policy and defense leaders on Capitol Hill.

Biden, the administration's designated lead player on Iraq, supports the full roster of arms sales, but in a scathing letter to Obama before Maliki’s arrival, a bipartisan group of Senate leaders, including Sens. Bob Corker (R-Tenn.) and Robert Menendez (D-N.J.), decried the violence and repression they said had resulted from Maliki’s rule. The president played Solomon in the middle.

So, yes, Maliki could buy (or be given money to buy) more Hellfire missiles, and yes, the previously approved sale of F-16s would go forward, but no, he could not -- for now -- get what he really wanted, which was a brace of Boeing-made Apache attack helicopters. (Biden supports selling the helicopters to Maliki.)

Apaches, hovering battleships bristling with ammo, were and remain a potent symbol of counter-terrorism military muscle. Iraq hired as its first postwar paid lobbyists in Washington the Podesta Group, which, perhaps not coincidentally, has done work for Boeing and is known for its ties to the Obama administration.

The Iraqis are also hedging their bets (and strengthening their bargaining position) by talking to the Russians about the purchase of Russian helicopter gunships.

What does Iraq have to do to get the Apaches (which the country doesn't yet have the military sophistication to use anyway)?

Simple. Iraq must master, or at least contain, religious and ethnic conflicts that have raged in the Middle East for millennia. After all, if the country can’t do that, no one else can -- and someone must.

Those conflicts have flared into the worst violence Iraq has seen since 2008, pitting the Shia-led government and its sectarian allies against Sunni insurgents and Kurdish separatists.

According to Obama administration officials and congressional aides, the key is to guarantee Sunnis -- once the ruling faction -- a governing role strong enough to counter the appeal of a Sunni-led jihadist group called the Islamic State in Iraq and al-Sham (ISIS). ("Al-Sham" refers to the Levant.)

But the jihadists will do what they can to disrupt the fact and the message of democracy. Many ISIS recruits come from neighboring Syria, where they are fighting the Shia-backed government of President Bashar Assad, and are dedicated to theocratic rule.

The civil war in Syria is also yanking Iraq back into military calculations for the region: The U.S. needs Maliki's help in avoiding an even bigger explosion in the Levant.

U.S. officials have complained that Iraq is allowing Iran to use Iraqi air space to deliver supplies to the Assad regime. Iraq has complained to Iran half-heartedly, but doesn't have the aviation wherewithal to stop the flights, even assuming that it wanted to.

Perhaps of greater concern, according to U.S. officials, is that the Syrian war has become a magnet drawing Sunni and Shia fighters from Iraq into the conflict across the border. U.S. officials say there is no evidence that the Iraqi government is encouraging the migration. But even if it tried to stop the flow, it couldn't because Iraq's control of its own borders is so flimsy.

U.S. officials told the visiting Maliki that they wanted to see evidence of further political outreach to Sunnis and Kurds at home. Maliki denied, in public and private, that he favored the Shia or that his government was excluding other groups, but since returning to Iraq, he has made a number of gestures -- including one toward better relations with Turkey -- that U.S. officials say they find encouraging.

The Obama administration is hoping -- counting on -- elections in Iraq next spring to create a stable climate. Officials see a favorable straw in the whirlwind: Maliki’s own party lost ground in regional elections earlier this year. That raised hopes for a spirited national election next April 30.

Iraq's problem isn’t elections per se; the country is actually quite good at conducting them. It’s the social and economic fabric that surrounds politics. Though the Iraqi economy is growing, the benefits are distorted by corruption, mismanagement and regional antagonisms.

America's own efforts at rebuilding the country have produced a mixed record at best. An inspector general’s report earlier this year found that more than $8 billion of the $60 billion the U.S. had spent on civilian “reconstruction” in Iraq since 2003 had been flat-out wasted, and that much of the rest of the work was of dubious value or long-term benefit.

Meanwhile, Iraq can’t fully protect or even police its own borders or air space.

“The problem is that the country was so wrecked and destroyed by the war,” said Michael Knights, an Iraq specialist at the Washington Institute of Near East Policy. “The infrastructure isn’t there.”

After spending hundreds of billions of dollars on war and reconstruction, the U.S. government is dialing back its support, which this year amounts to perhaps $3 billion, including more than a billion to support diplomatic security and a military mission led by a three-star general.

Iraq’s government has a legislatively approved budget, but the numbers are an election-year fantasy, Knights said. It assumes a much higher rate of production and sale of oil than is technically possible, he said.

Still, Iraq is selling ever-greater percentages of the oil it does produce to China, which is pouring drilling technology and capital investment into areas that American firms have left or not bid on.

Which means, in the long run, that China may end up “owning” Iraq, at least financially, and without having had to fight a war to do so. 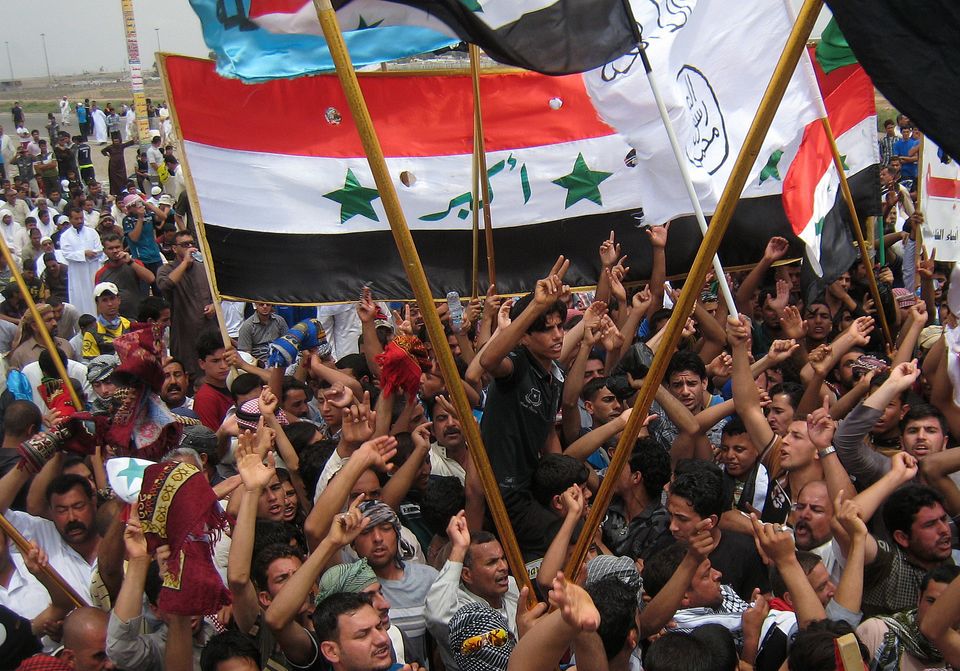