WASHINGTON -- The Oakland Police Department fired tear gas on Occupy Oakland demonstrators Tuesday night as they marched through downtown, determined to reclaim the camp that officers destroyed that morning. As the marchers zigged and zagged in search of safe ground, authorities bombarded and barricaded the activists into a drawn-out stalemate that resulted in further arrests.

The local police's use of force seriously injured an Occupy activist and Iraq War veteran.

Scott Olsen, 24, remains sedated on a respirator, in stable but critical condition at Oakland’s Highland Hospital after being hit in the head with a police projectile.

Olsen's roommate, Keith Shannon, 24, told The Huffington Post that Olsen is still in the emergency room.

"Right now, he's under sedation," Shannon said. "He walked into the hospital." But soon after his arrival, Shannon said, doctors found that there was swelling in Olsen's brain and put him under. He did not get a chance to talk to his friend. "They are waiting for a neurosurgeon to examine him to see if he needs surgery or not," Shannon said. If he doesn't need an operation, he'll be moved to the intensive care unit.

Activists staged Tuesday night’s march through downtown Oakland in response to a violent police raid on the Occupy Oakland encampment earlier that day, during which officers rained tear gas and rubber bullets on the activists in an effort to clear the camp. Police arrested scores of protesters during the eviction.

When reached at her Wisconsin home, Sandra Olsen, Scott's mother, told HuffPost that her son's condition was serious. "He has a head injury," she said. "They are still trying to figure it out with him. I don't want to tie up the phone line. He's not in the best shape."

According to Shannon, Olsen had been attending Occupy San Francisco events and had answered the call to join Occupy Oakland in solidarity.

"He doesn't agree with the way the banks aren't regulated, the way they drove the economy in the ground. He wants there to be regulation of the banks," Shannon said.

Shannon, 24, says his friend was simply one of the marchers. "He was just hit by a projectile," said Shannon, who did not attend the march but heard about the incident from eyewitnesses. "He wasn't near a police officer when it happened."

Dottie Guy, a veteran of the Iraq War and a friend of Olsen, found out about her friend's injury through Twitter and Facebook. She has maintained an overnight vigil at the hospital. "He always had a smile on his face," she said. "He's really into the movement."

YouTube video of the incident shows Olsen, wearing his Marine jacket without his nametape, being carted through a cloud of tear-gas smoke to the sounds of shrieking activists. In a close up, his forehead appears bruised and bloodied. He stares up at his ad-hoc triage in a daze. When asked, “What's your name?” he can’t answer. Someone screams, "Medic!"

Shannon first got to know Olsen serving in Iraq from August 2006 to May 2007, when the two worked tactical communications as part of the Marines' 3rd Battalion. Olsen subsequently served a second tour. "We both came out against the war," Shannon said.

Olsen was never injured during his two tours in Iraq.

UPDATE: 8:55 p.m. -- Sandra Olsen, Scott's mother, told HuffPost that her son remains sedated and still suffers brain swelling. She also reported that the left side of his skull was fractured. Olsen plans to fly to Oakland tomorrow to be at her son's side.

UPDATE: 4:20 p.m. -- New video posted to YouTube suggests that Olsen was hit at close range with a tear-gas canister. After demonstrators rush to Olsen's aid, an Oakland cop waits a few beats before lobbing a second explosive device at the crowd. They are attending to Olsen when the canister explodes, sending smoke everywhere. 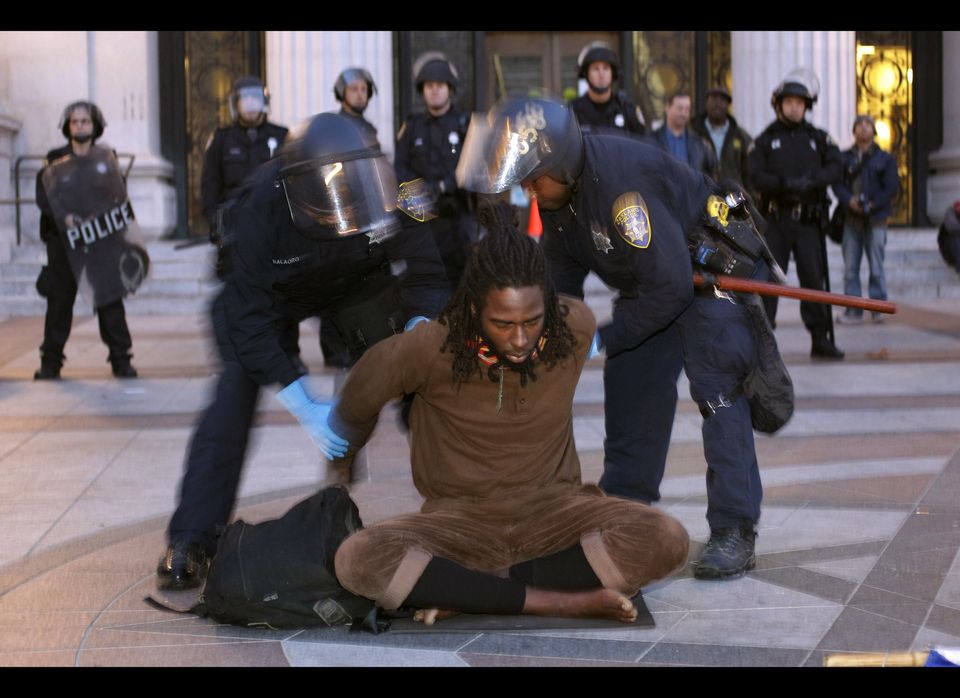