WASHINGTON -- Defense spending has boomed in the post-9/11 era, creating new jobs and programs to support American military operations around the world. But a new report released last week by the Institute for Economics and Peace says that war expenditures create as much of a bubble as the housing or stock markets, providing short-term gains while creating massive long-term problems.

The report compared the economic conditions for every major U.S. war since World War II. In each case, it said, "the positive effects of increased military spending were outweighed by longer term unintended negative macroeconomic consequences."

While the authors, including the institute's vice president, Michael Shank, stressed that they were not were attempting to "place value judgments" on American wars, they noted that the consequences -- higher debt, higher inflation, lower consumption and lower investment -- have harmed the long-term health of the economy even in the case of necessary conflicts.

The wars in Iraq and Afghanistan have "contributed to the U.S. having severe unsustainable structural imbalances in its government finances," the report said. While some of the financial trouble has resulted from other factors, such as rising energy prices, the current conflicts have been financed entirely by debt unlike other wars they studied, the authors noted.

Because the first wartime tax cuts in American history were imposed, the debt that resulted has created "major constraints on the economy and limited the scope of options that were available to policymakers" to address the flagging economy, the report said. 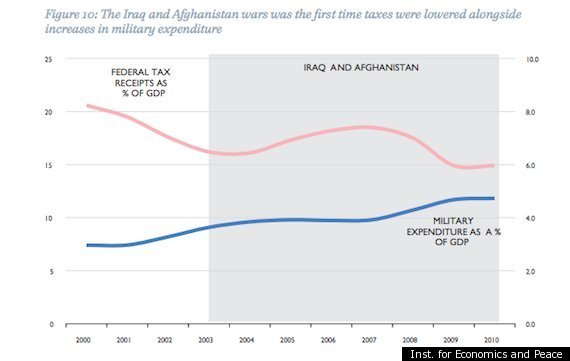 But regardless of the method of financing, the report said, any war results in long-term damage to the economy relative to its peacetime condition. "The U.S. has paid for its wars either through debt (World War II, Cold War, Afghanistan/Iraq), taxation (Korean War) or inflation (Vietnam)," the authors wrote. "In each case, taxpayers have been burdened, and private sector consumption and investment have been constrained as a result."

The report has been released amid congressional battles over how much the Department of Defense budget should be trimmed in upcoming years. Pentagon officials are in the middle of an extensive round of committee hearings on 2013 budget requests. Cuts proposed by defense officials with White House guidance have been slammed by Republicans as dangerous to national security and economic growth.

Many legislators, including budget hawks, routinely protest cuts in expenditures for bases and military programs by highlighting the impact on local jobs. "Defense cuts are certainly a path to job loss, especially among our high-skilled workforces," said Rep. Howard "Buck" McKeon (R-Calif.), the chairman of the House Armed Services Committee, said during initial discussions of the 2013 budget. "There is no private sector alternative to compensate for the government's investment."

But the institute's report warns against viewing defense dollars as jobs programs.

"The key question ... to understand if military spending remains cost-effective is whether it is achieving its primary purpose of improving national security," the institute authors wrote, "as opposed to secondary objectives [such as] jobs or the development of new technologies for industrial use."

The report asserts that military investments are inferior when compared with other forms of government spending in helping to boost the economy. Defense spending "is not as productive in economic terms as spending in infrastructure, education, or even as tax cuts to increase household consumption," the authors concluded. 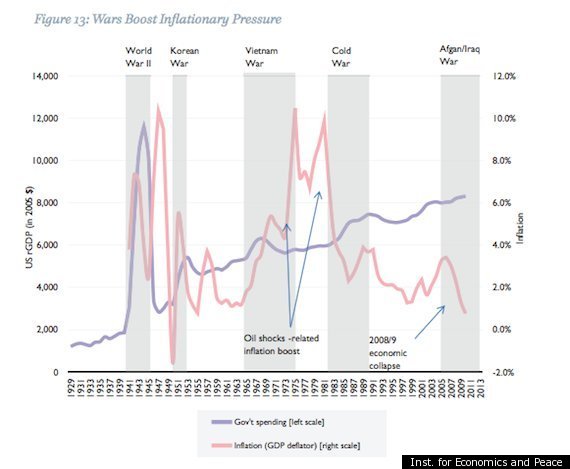