Last Saturday, quietly, without cheers, excuses nor lamentations, the Iraq War was over. Before dawn, the last convoy was crossing the international border to Kuwait, carrying a mixed load of soldiers and journalists.

During the previous weeks, troops were abandoning their bases, taking with them equipment, tanks and ordnance, and American flags. By the thousands, soldiers were coming back home.

Who is the soldier -- our youth -- that came back? How did they change?

I remember a political cartoon, now lost, in an American magazine at the end of the Vietnam war. Under the headline "When Johnny Comes Marching Home," a soldier walked down an empty avenue. Nobody welcomed him. Instead of a gun, he carried a syringe. This was that war's image.

And now? Will it be the unemployed young man?

Yes, because while unemployment at the national level is 9.2 percent, among veterans it is 11.4 percent, almost a quarter more, according to the Department of Labor.

But for Latinos and blacks, the percentage is much higher, reflecting their proportion among the nation's poor: 14 percent for Hispanics and 14.7 percent for African Americans.

For this war initiated on March 20, 2003, the bloodiest since Vietnam, wrote Nick Shifrin from Baghdad, "In the end, there was no decisive battle, no peace treaty."

As the war ended, almost 9 years later, the United States of America is a different country: more divided, rancorous, recriminatory, suspicious, again, almost as much as at the end of Vietnam.

The numbers are relentless.

Almost two million Americans participated in the conflict, together with the still evolving one in Afghanistan. Of them, 625,384 use the Department of Veterans Affairs (VA) healthcare system for rehabilitation; 4,476 American "men and women in uniform" died, and 32,102 were wounded. At least 168,854 ex soldiers are treated by VA for problems of adaptation to the civilian environment, haunted by their traumatic experiences.

This is the balance of an unbalanced conflict.

Their relative participation in the armed forces grew markedly during these years, jumping from 4 percent in 1983 to 9.5 percent in 2001, to 10 percent at the beginning of the war, and, finally, 12 percent when it ended, getting thus closer to the percentage of Latinos among the general population, which according to the 2010 US Census is 16 percent.

Among elite groups like the Marines, the percentage of Hispanics was even higher: 15 percent at the beginning of the war and 18 percent when it ended.

So, considering their increase in participation during the war years, Hispanics neither reneged on their obligations nor turned into cannon fodder.

But they participated at all levels of the war, including among those who paid the price in blood.

The first American soldier killed in the operation was Jose Gutierrez, 22, who arrived here as an undocumented child from Guatemala, crossing Mexico hidden in a train. And among the first seven American war prisioners, "one was a woman from Panama and another the son of Mexicans."

The total number of Hispanics killed in action until February 2009 was 450, according to United States Military Casualty Statistics, compiled by the Congressional Research Service.

By the end of the war, unofficial counts placed the total number at 477.

That is a little less than 11 percent of the total of casualties, reflecting their participation in the conflict and, according to the same source, surpassing the number of African American soldiers killed, which stands at 9.6 percent.

Among Marines, the rate was even higher. Of "969 Marines killed in Iraq, 39 were African Americans and 139 Hispanics," or 14 percent of the total.

All this confirms an early analysis by Pew Hispanic in 2001, according to which:

An important thing has changed since Vietnam: the abolition of compulsory recruitment. Without the draft, those who serve today are looking for the approval of their peers or to serve the country. They're also seeking a better future, benefits for study, housing, medical care and loans, among other things.

For legal immigrants, those who have a "green card," there was also the benefit of a shortened path to citizenship. At the beginning of the war, almost 5,000 immigrant soldiers benefited from an executive order that allowed those in active duty on September 11, 2001, to apply for naturalization. The number of Latinos among them is unknown.

Many Latinos also took part in the anti-war movement. They marched in demonstrations, with protest signs in one hand and American flags in the other. They attended mock funerals at the fake Arlington West cemetery in Santa Monica, California. They were active as parents opposed to military recruitment in public schools in poor neighborhoods. And they participated in the most terrible of protests: those by parents who lost their children and who clamored for the lost meaning in their lives. Along with national protagonists like Cindy Sheehan there were figures such as Fernando Suarez del Solar.

But there also were many Latinos that supported the war as combatants, who raised the flag and defended their service.

Many Hispanics were decorated. Five of the 21 recipients of the Navy Cross were Latinos.

Others were promoted to higher ranks. Lieutenant General Ricardo Sanchez was chief of forces in Iraq for 18 months, starting during the difficult days after June 2003.

But in general, in the weeks leading to the war, support by Latinos paled in comparison to other groups, as shown in a Pew Hispanic study.

In those days, the war drums beat loudly, with our government helping induce the fever for war and controlling the flow of information. Between 60 and 70 percent of the population supported military action, and even more after it started, but only 48 percent of Latinos -- and among immigrants -- just 46 percent.

As the war ended, the proportion had changed completely: 75 percent of the public supported the withdrawal of troops. But a whopping 96 percent of veterans said that they were proud of their service.

Did the war influence the status of Hispanics in the country? The answer lies in the event that allowed it to be characterized as part of the anti-terrorist effort: the 9/11 attacks. On that fateful day, an immigration agreement between former presidents George W. Bush and Vicente Fox of Mexico vanquished. Increased border security and stricter immigration laws became part of the answer to the perceived threat. Deportations increased and swelled to record numbers under President Obama, who opposed the Iraq War and supported immigration reform. In the war years, many Latino soldiers learned that their government had initiated -- and, in some cases, completed -- deportation proceedings against their loved ones.

Latinos participated as much as any other group in the conflict. During the war, their numbers in the armed forces grew to around 12 percent. Their sacrifices were also proportional to others, including immigrants. Thousands of legal immigrants received their citizenship because of their service to the nation.

Many more returned home without a job.

The war ended, as I wrote earlier, silently and without fanfare.

When President Obama announced in October that troops would leave Iraq by year's end, only 30 percent of the public heard him. The news generated much less interest than "several other major policy announcements about Iraq."

One last image. A personal one, from another war, in another country, in a different time. 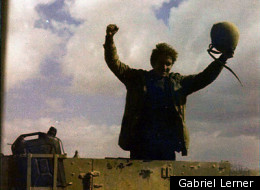 It was 1974. Israel had signed a cease fire accord with Egypt, ending the Yom Kippur War. We withdrew from Egyptian territory back to the Sinai peninsula. Our armored vehicle crossed an improvised bridge over the Suez Canal. The photo shows my younger version, my hair grayed by desert sands, my arms in the air, my helmet in hand.

I felt the same as American soldiers coming home now: joyful for having survived.