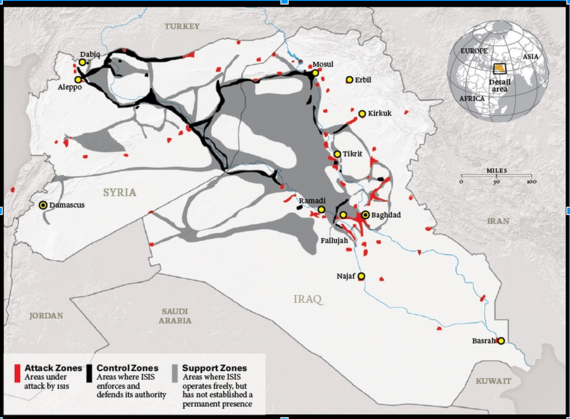 Iraqi army officers made two attempts on the life of the country's prime minister, Haider Al-Abadi, before being thwarted by the U.S. Embassy in Baghdad, according to a high-level Iraqi official. This is the latest symptom of the ongoing radicalization and sectarian violence that has plagued post-2003 Iraq. The roots of ISIS' rise can be found in the disempowerment of the Sunni tribes at the hands of the Shiite-led government. Despite substantial support from the international community, Iraq continues to struggle under the ISIS menace. Only reconciliation and cooperation between Sunnis and Shiites can lead to the purging of ISIS and the prevention of the rise of similar groups in Iraq.

The two factions' radically different political ideologies too often manifest themselves in violent conflict which threatens the stability of the country. These differences stem from the Shiites' refusal to grant local political authority to the Sunni tribes from the province of Anbar, and the cities of Ramadi and Fallujah, let alone representation in national governance. This trend of Sunni political exclusion heightened after Nouri al-Maliki's election to a second term as prime minister in 2010. Critically, this exclusion has left no choice for the Sunni tribes in Anbar province other than joining ISIS to protect their tribal control. Thus, Iraq's lack of national cohesion has made it harder for the country to deal with the current crises inflaming the region. Looking forward, the UN Secretary-General special representative to Iraq, Jan Kubis, explained that unity and cooperation between the Sunni tribes, the Shiite-led government and all members of Iraqi society is essential to successfully counter ISIS.

The political instability in Iraq is exacerbated by a lack of consensus among the major political blocs about how the country should be governed -- a situation which has its roots in the Erbil Agreement. This agreement, which was discussed in 2010 between Masoud Barzani, president of the Iraqi region of Kurdistan, former Iraqi prime minister Nouri al-Maliki, the leader of the dominant Islamic Dawa party, and Iyad Allawi, the leader of the Iraqi National Accord party, if implemented, would have reduced the powers of the prime minister. Instead, Maliki consolidated his power over the Kurdish and Sunni political blocks, which have since been unable to win the necessary majorities to contest his power. This consolidation of power over the Kurds and Sunnis reduces Iraq's ability to develop such policies as a strong national military, which could keep the country stable and prevent another power vacuum.

President Fuad Masum appointed a Sunni and a Shiite to head the Ministry of Defense and the Ministry of Interior, respectively, following his presidential election in 2014. Haider al-Abadi, after being appointed in 2014 as prime minister, also declared that uniting Iraq would be a political priority, and that he will work to develop a government that represents Iraqis of all ideologies and creeds equally. Abadi's commitment to resolving Iraq's sectarian strife -- which he will accomplish "even if [he] get[s] assassinated by it," to use his words -- is a welcome change from his predecessor's schismatic rhetoric.

On March 1, Iraqi parliament speaker Salim al-Jubouri said that the doors of reconciliation are open to everyone "except [those] who collaborated with [ISIS]." On March 2, 2015, Iyad Allawi noted that, "a true reconciliation should include all parties except for the ones who have Iraqi blood on their hands." These statements, aimed at decreasing sectarian tension, and could ally many Sunni tribes with the Shiite government rather than ISIS.

Corruption has also proved to be a constant difficulty in Iraq. In an interview with the New York Times, President Masum highlighted the need for both political and religious reforms, admitting that rampant corruption has even crept into the army. However, the appointment of Haider al-Abadi in 2014 promises improvement on this front. As prime minister, he laid out a seven-point plan on August 8, requiring a number of senior government positions -- previously filled by partisan officials shrouded in allegations of corruption -- to be filled with political technocrats with no party affiliations. These proposed reforms followed anti-government protests, which were sparked by unreliable electricity and allegations of corruption at all levels of the country. One day before the reforms were announced, Ayatollah Ali al-Sistani - Iraq's most influential Shiite cleric - also urged Abadi to "strike with an iron fist" against corruption, and to make political appointments based on ability, rather than party or sectarian affiliation. Abadi's reforms also call for a reduction in the cost of officials' personal bodyguards (which for some officials number over 1000) and a restructuring and budget increase for Iraq's national security forces. Iraq's Parliament unanimously passed the measures in August, taking a major step towards curbing corruption. However, this has by no means solved the larger issue of uniting the country across its tribal divides.

Reconciling the Sunnis and Shiites in Iraqi society

The country has intensified its attempts at national reconciliation. Notably, Iraq has sent diplomats to countries that have faced similar sectarian problems, with the aim of finding ways to speed the reconciliation process. According to the Irish Times, former national Iraqi government advisor Mowaffak Al-Rubaie, called the mission an "eye-opener." He noted, however, that just as it took Northern Ireland a considerable amount of time to reconcile their differences with the British, Sunni-Shiite peace in Iraq would be a gradual process. For the sake of national unity, Al-Rubaie said that the government was ready to meet with representatives of all Iraqi insurgencies, excluding only "diehard Saddamists" and Al-Qaeda. Imposing too many preconditions, Al Rubaie said, would hinder the government's efforts.

Iraqi tribes have already proven that they are capable of uniting against a common enemy. In 2007, Sunni tribes in central and western Iraq turned against the Al-Qaeda fighters and cooperated with the Shiite government. This sort of cooperation, that in the past has mended sectarianism and created progress against the prominent terrorist organizations, is now more important than ever in Iraq's endeavor to destroy ISIS. Similarly, after the fall of Mosul in June 2014, Ayatollah al-Sistani urged the Iraqi people, regardless of religion (Sunni, Shi'ite, and Christian), to rally against ISIS by joining the Popular Mobilization Force. Thus, the Popular Mobilization Force lost its explicitly Shi'ite image and was placed under the control of the prime minister. Both these examples demonstrate the possibility of national reconciliation in Iraq.

Reconciliation at the national level rests on respect and cooperation between individuals, tribal blocks and the ruling government. In other words, every citizen should have freedom of speech, thought and representation. Reconciliation rests on differing opinions as a part of a national dialogue. Moreover, national reconciliation will require skilled leadership and a loyal citizenry. Democracy, strongly enforced laws, shared cultural symbols and equal distribution of resources, will all aid Iraqi citizens to identify as Iraqi.

Critical collaboration across tribal divides, combined with support from both the Iraqi government and international governments and agencies - such as the United States - will allow Iraq to defeat ISIS. And indeed, Iraq has no option other than to defeat ISIS if it wants to maintain its sovereignty and guarantee the humanitarian, political and economic rights of its citizenry. There is, however, much yet to be done.