Now that the 2012 Olympic Games in London are over, have you ever wondered what happens to athletes after the Olympics? "There is life after sports, lots of it," two-time Olympian, Irene Piotrowski of Los Angeles, California, said.

A media darling known as "Irene the Queen," Piotrowski was Canada's champion and world record-setter in track and field from 1963 to 1973. In 1993 she was inducted into the British Columbia Sports Hall of Fame. However, life for the former Olympian isn't golden; Piotrowski, now 71, was recently evicted from her apartment and is battling cancer. Her life is a remarkable story of becoming a world-class athlete as well as an inspiring example of dealing with reality after the fading of one's abilities and fame.

Irene Piotrowski was born Irena Macijauskas in 1941 in Lithuania -- a place that historian Timothy Snyder calls the "bloodlands of Europe." Fleeing Soviet occupation, her family left the country in 1944 and went to Germany, where American soldiers found and then placed them in a displaced persons camp. Classified as "non-repatriables," the International Red Cross found her uncle in Vancouver and helped the Macijauskas come to Canada through a close-relatives sponsorship plan in 1948.

Piotrowski's involvement with sports began in high school when she won all local track championships. Yet in 1959, she put her passion for sports on hold and became a teacher. When a former coach asked for her assistance with the girls' track team, Piotrowski resumed training.

Heinz Piotrowski, her boyfriend and eventual husband, became her coach. At a training session in 1962, Piotrowski broke the Canadian record for the 100 yd/m. The following year, at the age of 22, she became number one female sprinter in Canada and was selected to represent her country at the 1964 Olympics in Tokyo.

Piotrowski continued teaching to support herself and Heinz; this was decades before the lucrative endorsements of contemporary star Olympians. "Running for the country [was] an honor and a benefit," Piotrowski said.

Indeed, at the 1964 Olympics in Tokyo, Canadian women athletes were placed in U.S. military barracks that lacked basic comforts. Piotrowski also felt enormous pressure to bring back a medal for Canada: "I was a greenhorn with zero international experience," she recalled. Piotrowski advanced to the semi-finals of the 100m but didn't win a medal.

Piotrowski was very disappointed but not discouraged. Success followed later in a series of international competitions and she was named captain of Canada's women's track and field team.

Piotrowski represented Canada again in the 1968 Olympics in Mexico, where she recalls witnessing black athletes Tommie Smith and John Carlos make history on the Olympic medal stand, raising their fists in the air against racial prejudice. "I absolutely admired them," Piotrowski said. "They set up a great example." Her political awakening was accompanied by a growing friendship between her and Tommie Smith ("He was so gorgeous and a real gentleman"), which was met with racist anger.

Piotrowski went on to set a Canadian record in the 100m at 11.3 seconds twice in one day, but again didn't win a medal.

As a result of injuries, Piotrowski retired from sports in 1973. "I was happy with what I'd done and was ready to pass the torch... Those medals are not life," she said.

There were more changes in store for Piotrowski: she divorced Heinz around 1973. Through the years Heinz developed resentment toward her success. "I'm tired of being Mr. [Irene] Piotrowski," he complained to her.

Piotrowski stopped teaching in 1979 and applied what she learned in sports to her life: to have passion for things. "You should enjoy what you do," she said. Piotrowski began working at a jewelry store, remarried and had a life of financial comfort and world travels.

But that wasn't enough. After her second husband passed away in 1989, she relocated to Los Angeles, and has worked there in PR ever since.

Sadly Piotrowski, now 71, is experiencing serious challenges. In 2003 she was diagnosed with skin cancer and passed through several surgeries to remove the cancer. Five years later her liver became non-functional, an unfortunate side effect of her cancer treatments, she said. She was also misdiagnosed with a skin condition, the treatment of which drained her finances.

"I couldn't find work here [in L.A.] where they are obsessed with youth and beauty," she said. As her personal drama escalated, Piotrowski was evicted from her apartment in August 2012. She now sleeps on a friend's couch.

Yet despite these hardships, Piotrowski remains optimistic and says her current difficulties are temporary. She has been in similar situations before -- she came to Canada as a homeless war refugee. "I'll never give up," she said. "Everything in the end will be okay."

Irene Piotrowski survived WWII and stood on victory stands. Now this former educator teaches us what it means to be an Olympian in everyday life. "You may lose a race but you shouldn't think of yourself as being beaten," she said. "The good thing about obstacles is that when you bump onto them, they keep you from falling down."

Following her own advice, Piotrowski is preparing for her next act. She is looking for work, and hopes to found a humanitarian organization she calls the World Peace and Goodwill Campaign. Piotrowski will also lobby to be involved with the International Olympic Committee as an alumna.

You can't sit like a bump on a log and just dream," she said. "Get up, dust yourself off, and start all over again. Take the skills you have and go and improve them, make them better."

Reality Beyond The Olympics
Irene Piotrowski 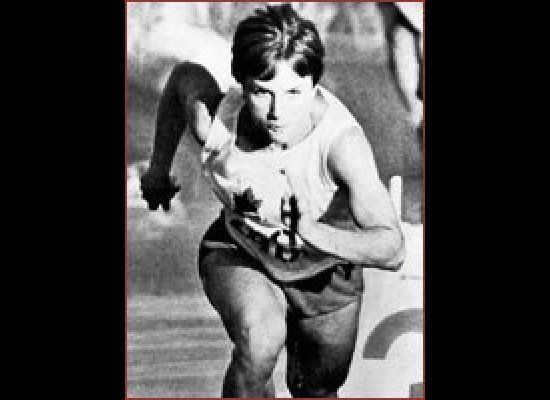