During Earth's last ice age, iron dust dumped into the ocean fertilized the garden of the sea, feeding a plankton bloom that soaked up carbon dioxide from the air, a new study confirms.

But the results deal a blow to some geoengineering schemes that claim that people may be able use iron fertilization to slow global warming. The planet's natural experiment shows it would take at least a thousand years to lower carbon dioxide levels by 40 parts per million — the amount of the drop during the ice age.

"Even if we could reproduce what works in the natural world, it's not going to solve the carbon dioxide problem," said Alfredo Martínez-García, a climate scientist at ETH Zurich in Switzerland and author of the study, published today (March 20) in the journal Science.

The idea of fertilizing the ocean with iron to combat rising carbon-dioxide levels has intrigued scientists for more than 20 years, since the late researcher John Martin observed that the ice-age drop in carbon dioxide (noted in ice cores) synced with a surge in iron-rich dust.

The link between more iron in the ocean and less carbon dioxide in the air lies in the tiny ocean-dwelling plants called phytoplankton. For them, iron is an essential nutrient. In some regions, such as the Southern Ocean surrounding Antarctica, the water lacks iron but has plenty of the other nutrients that phytoplankton need to grow. Sprinkling a little iron dust in that region could boost plankton numbers considerably, the theory goes.

When climate changes during the ice age boosted the amount of iron-rich dust blowing into the Southern Ocean, the phytoplankton there grew and spread, gobbling up more carbon dioxide from the atmosphere in the process, Martin said.

The model, called the iron fertilization hypothesis, has been borne out by modern tests. Seeding small areas of the oceans does, indeed, cause big phytoplankton growth spurts. [7 Schemes to Geoengineer the Planet] 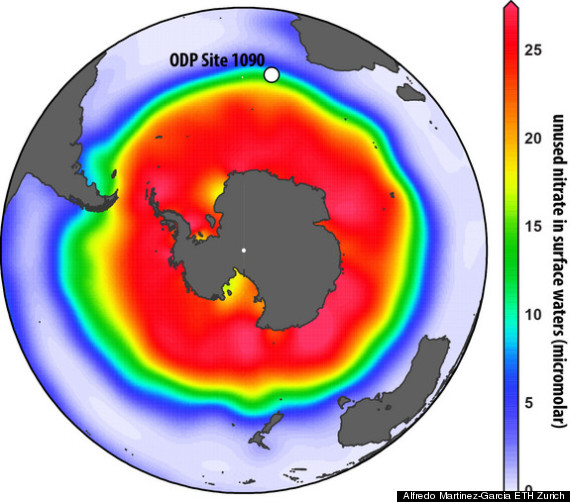 Location of the sediment core analyzed in the study (ODP Site 1090), shown against the concentration of nitrate in surface waters.

In the new study, Martínez-García and his co-authors examined seafloor sediments from the Subantarctic Zone of the Southern Ocean, southwest of Africa. When the last ice age peaked between 26,500 and 19,000 years ago, dust blowing off of Patagonia and the southern part of South America settled there, the drill core shows.

To gauge the changes in seawater composition at the time, the researchers examined the fossilized shells of microscopic marine animals called foraminifera, which eat plankton and preserve the local ocean chemistry in their shells. During the ice age, nitrogen levels dropped when iron-rich dust increased at the drill core site, Martínez-García discovered.

"It is particularly gratifying to see such persuasive evidence for the iron hypothesis now appear in the sediment record," said Kenneth Coale, director of the Moss Landing Marine Laboratories in Moss Landing, Calif., who was not involved in the study.

Too big to succeed?

The dust level in the drill core suggests that about four to fives times more sediment fell across the Southern Ocean between South America and Africa during the ice age than the amount that falls there today, Martínez-García said.

"The magnitude of the area we are talking about is equivalent to three times the areas of the entire United States, and is maintained for several thousand years," he told Live Science. "This helps put into perspective what we can do in terms of the modern ocean."

The new study supported the argument that the amount of iron needed for geoengineering is untenable in the long term, said Gabriel Filippelli, a biogeochemist at Indiana University-Purdue University in Indianapolis. "It is difficult to imagine even a decade-long international effort of iron fertilization, sustained by continual ship runs dumping iron in a weather-hostile and isolated region of the world, let alone an effort that lasts a millennium," Filippelli said.

But Filippelli also said he thinks the ice-age iron story is more complicated than just dust blowing in the wind. "The authors note only one source of iron — from above," he said. There is also evidence that the oceans were richer in iron because of more river input during the ice ages, he said. Thus, the ice-age ocean had extra iron from above and from below.