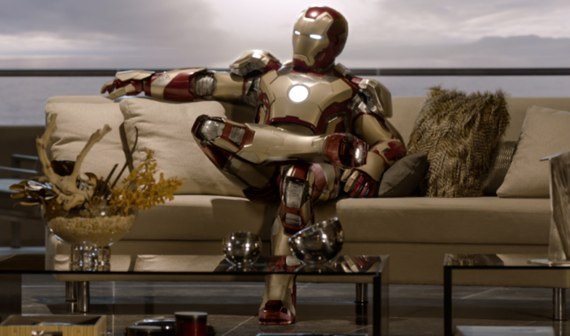 On May 3, summer blockbuster season kicks off here in the U.S. with the release of Iron Man 3. Once again, Robert Downey Jr. (Iron Man 2) reprises his role as billionaire playboy Tony Stark in the series, but this time there's a new director on board: Shane Black replaced Jon Favreau behind the camera for this installment. (Favreau, however, still appears onscreen as Tony's bodyguard-friend Happy Hogan.) Does Iron Man 3 improve on the fairly dismal Iron Man 2? Could Iron Man 3 possibly be the best of the Marvel movies? As a service, we answer every question that you could possibly have about Iron Man 3.

Q: Is Iron Man 3 the best of the Marvel movies?

Q: Wait, Iron Man 3 is better than The Avengers?

A: As sheer spectacle? No. And I haven't forgotten how much fun The Avengers was last summer. But, as a movie from start to finish, Iron Man 3 is a better film.

Q: Is there a chance that I smell hyperbole?

A: First, hyperbole doesn't have a specific smell that I'm aware of. (If it did, I assume it would smell something like a warm tire.) But I saw Iron Man 3 10 days ago, so I've had at least some time for this to settle in. (Yes, I've spent way too much time thinking about this.)

Q: Where do we find Tony Stark when Iron Man 3 begins?

Q: What is Tony's mental state?

A: Tony is now prone to the occasional panic attack.

Q: Are the events from The Avengers specifically mentioned during Iron Man 3?

A: Yes. In fact, that's one of the best parts of Iron Man 3. Tony went through some serious shit during The Avengers and Iron Man 3 is smart enough to address all the fallout.

A: Iron Man 3 begins with a flashback to a 1999 New Year's Eve party in which Tony meets a young botanist named Maya Hansen (Rebecca Hall) who is developing a technology called Extremis.

Q: What is Extremis?

A: Extremis allows living organisms to regrow extremities. Unfortunately, not every living organism's body accepts the Extremis treatment. If Extremis is rejected, it creates a very large explosion.

A: Basically long enough for Tony to also meet Aldrich Killian (Guy Pearce), another scientist that Tony rejects. Of course, since this man is played by Guy Pearce, we meet him later in the movie and he has kept a grudge.

Q: Is there a Pulp Fiction reference during this scene?

Q: Does Guy Pearce have a similar role to the one Sam Rockwell had in Iron Man 2?

A: I had assumed that this was the case, but no. I'll say this: Pearce's role in this movie is a lot larger and a lot more important than I had ever assumed.

Q: Does Tony have any new toys in this movie?

A: Tony has developed quite a few new Iron Man suits, and he's created a way to control the suits without actually being in the suit.

Q: Isn't The Mandarin in this movie?

A: The Mandarin, played by Ben Kingsley, is very much in this movie.

Q: In the comic books, The Mandarin is Chinese. How does Ben Kingsley pull this off?

A: In Iron Man 3 The Mandarin is certainly not Chinese. He's presented as a terrorist figurehead not unlike Osama bin Laden and he has a habit of interrupting regular scheduled programming to broadcast his propaganda videos.

Q: If I'm a huge fan of The Mandarin, will I enjoy how he's presented in this movie?

A: Well ... let's just say it's an extremely unique performance and we'll just leave it at that.

Q: Does Rhodey (Don Cheadle) have more to do in this movie than he did in Iron Man 2?

A: Not at first, but, by halfway though, Rhodey becomes a major player, fighting under the name Iron Patriot. In fact, everyone has more to do in Iron Man 3 -- Gwyneth Paltrow especially -- than in the prior movie.

A: The biggest problem with Iron Man 2 (notwithstanding Mickey Rourke's awful performance) is that there is just so much going on. Not only were there the characters that are essential to the Iron Man movies, but Iron Man 2 also had to deal with all of the pre-Avengers buildup nonsense. I mean, even Jon Favreau's Happy Hogan has a nice little part in Iron Man 3.

A: The U.S. government rebranded Rhodey's former alter ego, War Machine, to something a little more ... patriotic -- which includes a new red, white and blue exterior. This becomes a running punchline for most of the movie.

Q: There are still a lot of characters. How does it not get too crowded like Iron Man 2 did?

A: It's funny, even though Iron Man 3 is a big summer Marvel movie, it still somehow feels intimate at times -- which is a credit to director Shane Black.

A: There's a good half hour portion of the movie in which Tony Stark is stranded in Tennessee and doesn't have access to the Iron Man suit -- all the while Tony has to solve a mystery without access to his technology. (Plus Iron Man 3 is set during Christmastime, which also helps building a sense of intimacy.)

Q: Does Iron Man 3, once again, end with Iron Man fighting another human being wearing an iron suit?

Q: What is the worst thing about Iron Man 3?

A: As with any superhero movie, there are a few hokey moments, especially near the end. Fortunately, there are quite a few less than normal.

Q: What's the most impressive scene that you've watched in the past year?

A: There's a sequence in Iron man 3 in which quite a few people are thrown out of an airplane in midflight. The scene of Iron Man trying to rescue them was filmed using a honest-to-goodness real parachute team. In other words: Real human beings! In more other words: Yes, CGI in 2013 is great, but the human eye can still tell the difference what's real and what's not.

Q: What is the funniest thing about Iron Man 3?

A: Tony Stark's interactions with an adolescent boy while Tony is stranded in Tennessee -- which, I know just by typing this, sounds corny. But it's done extremely well.

Q: How many times does Tony Stark call an adolescent boy a "pussy" in Iron Man 3?

This story appears in Issue 47 of our weekly iPad magazine, Huffington, in the iTunes App store, available Friday, May 3.