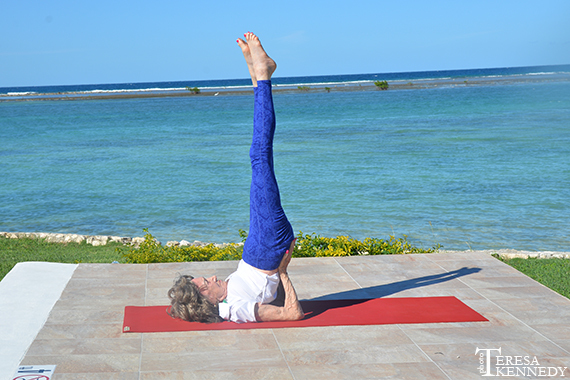 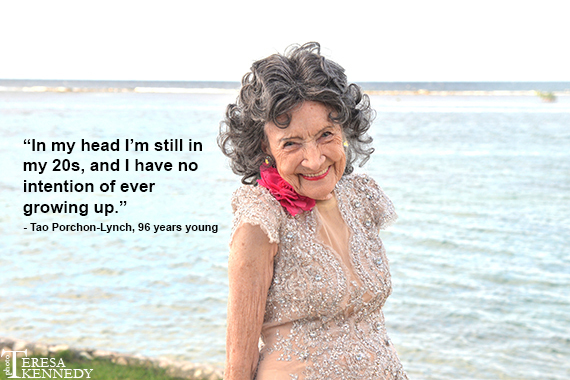 Millions across the globe have been inspired by 96-year-old yoga master Tao Porchon-Lynch -- World War II French Resistance fighter, model, actress, film producer, wine connoisseur, competitive ballroom dancer and yoga master. She exemplifies her mantra: "There is nothing you cannot do. On the Jan. 20, 2015 airing of the Steve Harvey Show, Steve Harvey said, "This is mind blowing to me... 96?" With a smile and mischievous twinkle in her eye, Tao said, "Yes, I'm 96 going on 22."

At age 22, Tao had already marched with Mahatma Gandhi twice and helped Polish Jews escape the Nazis during World War II. She was performing nightly in cabarets during the intense Bombing Blitz in London and was soon to marry a handsome French fighter pilot, a member of the IIe de France squadron that, among other things, flew cover over Normandy on D-Day. After the war, she became a famous model for designers such as Jean Dessès and Elsa Schiaparelli, and then an actress under contract with MGM. That was just the start of her incredible life journey. Today, she still has that fearless and fiery spirit as she speaks on peace panels, balances in yoga postures and kicks up her heels in Fred Astaire dance competitions.

Ultimately, we all hope we can live to Tao's age with a sharp mind and an agile body. So, what are her secrets? Is age just a number? I've had the awesome pleasure and honor of spending the last few years intensely studying Tao's life, philosophy and whole being since she asked my mother and me to write her biography. Out of the many things I've observed about Tao, here are seven secrets -- just a touch of what you can learn in her long-awaited inspirational memoir, Dancing Light: The Spiritual Side of Being Through the Eyes of a Modern Yoga Master.

1. Tao draws energy from the Universe. From when she used to "listen to the grass grow" as a child, Tao learned at an early age how to tap into the core essence of life, what she calls the "Eternal Energy." This life force is her adrenaline and breath is the gateway. The intensity of her innate energy gives her seemingly boundless vitality and a youthful spirit.

2. While most people simply observe Nature (if they even stop to do that), Tao seeks a connection with Nature. Tao says that Nature is her "encyclopedia." In essence, it is her "interactive TV." She participates. When she steps outside, it is like she is infusing herself as an actor in a grand, fantastic set -- a live action drama called Nature. It is a direct channel to intuitive insight. She takes time to interact with the birds, feel the breeze over the ocean and dance with the sway of the trees. She seeks the wonder of Creation and feels the connectedness with the world around her. She lives the Oneness that underpins her philosophy.

3. Tao has mastered the art of conscious motion. For a yoga master, Tao doesn't sit still for very long. Unless she is in a seated meditation, she is constantly on the move -- teaching, traveling, dancing, and enjoying each experience. That's how she has lived such a fully manifested life. If life were an amusement park, Tao has been on every ride at least 10 times. She harnesses the seemingly contradictory concepts of stillness and constant contact with the reality of living. She embodies the essence of mindfulness -- a state of ever-present awareness... whether still or in motion.

4. Tao makes joyous and authentic choices. She doesn't believe in a rigid "one way" of being. Unusual for a yoga master, she loves wine, milk chocolate and high heels. She is, as Dr. Maya Angelou termed, a "phenomenal woman" and dresses with the vibrancy of Nature. In the June 2014 issue of O, The Oprah Magazine, Tao had on a red leather jacket and 6-inch paisley heels -- while sitting in a lotus position perched on a bar stool! She believes that, if it does no harm to others, you should do what makes you feel good -- that which expresses the essence of who you are. As a teacher, she doesn't offer cookie-cutter instruction. She listens to what the students need and helps each one reach his or her Highest Potential.

5. Tao freely shares her energy. Simply by being in her presence you receive a "royal energetic treatment." Her spirit immediately soothes you and the softness of her voice forces you to draw closer and be still. When you look into her eyes, they are saying, "Are you ready to play?" Her toys in the sandbox are laughter, joy and energy and she understands the power of a smile. My brother said, "Anyone who doesn't smile when she smiles needs to have their smile mechanism checked." This positive exchange gives her a charge.

6. Tao is always learning, never believing she is a "master." Tao started yoga at age 8 -- in 1926. Her teachers were a Who's Who of the Spiritual World -- from Swami Prabhavananda, Mataji Indra Devi and Dr. Roman Ostoja to The Maharishi, B.K.S. Iyengar and K. Pattabhi Jois. Yet, Tao is still open to learning. The beauty about her being a master is that she doesn't think she is one. She says, "I've learned as much from my students as I have from my teachers."

7. Tao embodies the concept of "carpe diem," while having a clear vision of her dreams. She doesn't believe in procrastination and instead wakes up and says, "This is the best day of my life!" While she dives fully into what is front of her, she glows with excited expectation of what's to come. When I asked her what she wants to do in 2015 she said, "Travel the world!" She has already crossed the globe a few times. Now, as part of her documentary, we are looking to retrace her steps in India, Europe and other places -- getting first-hand commentary on historic events like the 1930 Salt March and how she helped Jews hiding under the caves of Paris escape the Nazis. At an age when most have slowed down, Tao is ready for her next adventure.

My conclusion: Age is simply a concept. Vitality is really the spirit you exude and the energy you bring to life. Nevertheless... there are a few things Tao does every day that are practical "anti-aging" techniques -- secrets she hasn't really shared in detail with the public. For these, you have to get Dancing Light. Be fascinated by her story and grow from almost a century of wisdom... knowing you too can craft a fulfilled "Tao-like" life! For more on Tao, the book and how you can help make 2015 the best year yet for Tao -- and maybe see her in your town -- go to www.TheTaoExperience.com.

Watch this video for a glimpse of Tao's life and a touch of her light:

Here are a few more pictures of the incredible Tao to inspire you. I took them while on our December 2014 writing retreat in Montego Bay, Jamaica. It was actually a bit cloudy but Tao brought out the sun: 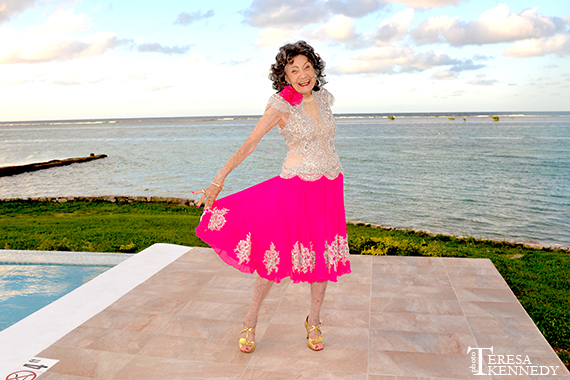 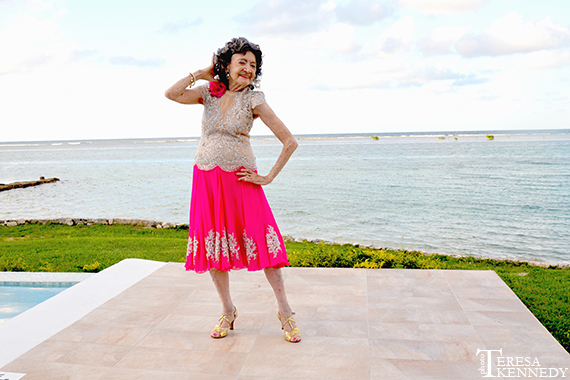 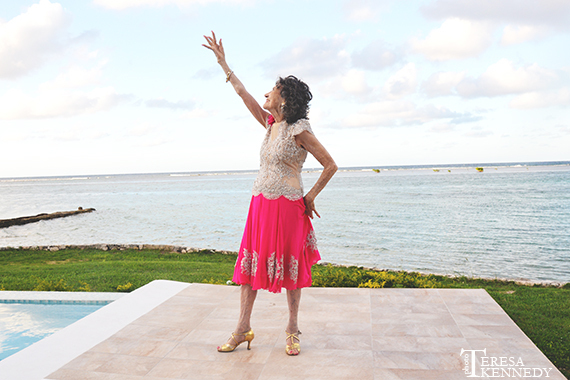 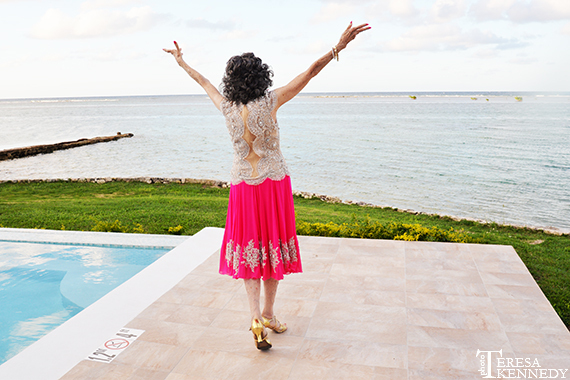 Teresa Kay-Aba Kennedy is a Harvard-trained strategist and World Economic Forum Young Global Leader. She operates the publishing and e-commerce platforms, www.PowerLivingMedia.com and www.IAmPowerLiving.com. An early Internet pioneer, she has advised billion-dollar companies on their own multi-platform engagement strategies. A seasoned executive/life coach, sought-after inspirational speaker and founder of the first yoga studio in Harlem, she incorporates mindfulness into her leadership talks and has taught yoga in places like The Great Wall of China. Her latest book - which she co-authored with her mother Columbia University-trained journalist Janie Sykes-Kennedy - is Dancing Light: The Spiritual Side of Being Through the Eyes of a Modern Yoga Master on her teacher/mentor 96-year-old yoga master Tao Porchon-Lynch.