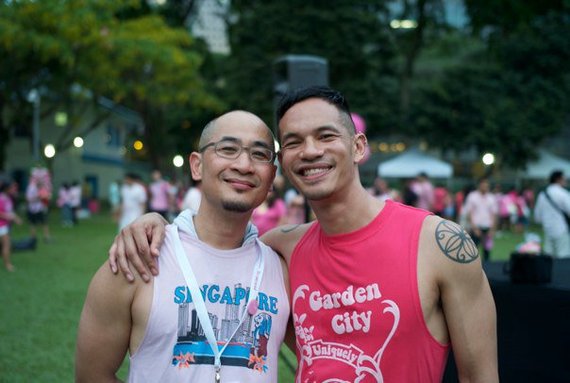 I have to admit that the idea of displaying affection with my partner in front of my family scares me; much to the chagrin of my partner with whom I'm celebrating our 10th year anniversary with this month.

This fear is most certainly derived from an internalised stigma, since there is nothing to suggest that my family would have a problem with such displays. They have learnt to deal with my sexual orientation and gender identity since the discussion was initiated years ago when I was seventeen. In fact, I'm proud to say that my family have become my most ardent supporters in both my personal and professional life.

I freely discuss campaign issues with them and share articles as well as videos that talk about me being gay and living with HIV on YouTube. They sometimes share the same material among their social networks. There was even an occasion when my Dad joined my friends and I to stand up to the hateful speech being spewed by Christian fundamentalists, who have become a recurring fixture on the sidelines of the Manila Pride March in the Philippines.

Yet, despite all this, my self-censoring of same-sex affection persists. It irks me that something like this still hangs over my shoulder. However, I know that I am not alone.

Think of any religious or cultural festival that involves a family get-together; whether it be the Chinese Lunar New Year, Eid al-Fitr, Christmas, Hanukkah, Thanksgiving, birthdays or weddings --you can bet that scores of usually out-and-proud lesbians, gay men, bisexual and transgender (LGBT) people dread the annual or periodic journey back into the closet as they share meals with relatives and dodge questions such as, "why are you still single?" or "when are you going to get married?" Over a lifetime, the repetition of this interrogation can gnaw away at self-esteem with great precision.

A growing number of people in the LGBT community have relieved the stress of these situations (to a certain extent) by coming out to their families. But in Asia, as in other developing and emerging regions and countries, our visibility, let alone legal recognition, is nothing like the progress made in the West.

Every time I hear of a friend who has come-out to their family I am heartened and laud them for their courage. Equally worthy of kudos is when I hear of friends who may not have verbally come out to their family, but instead mustered the willpower to bring their partner to a family gathering. I heard a few of these stories during the recent Lunar New Year festivities.

Often the intrepid couple is greeted by a complex array of nervous smiles and age-old social etiquette being reinterpreted by relatives on the spot. Depending on how the body language of parents and extended family is read and if no tears were shed or voices raised, the venture might be deemed a success even without the words "ma, pa... I'm gay" passing anyone's lips.

But even as more stories like these happen in our region, you can bet that few people have reached a level of openness where same-sex couples hold hands during family portrait taking or sit in a casual embrace on the parent's sofa while chatting to aunty and uncle. Some people may say that it's not Asian culture to be openly affectionate. On the contrary, while vocabulary of affection in Asia may be different, we still thrive on affection just like anyone else.

Taboos of same sex affection may seem trivial in a world where discrimination and oppression against the LGBT community are rife; where, in countries and regions like Nigeria, Malaysia, Russia and the Middle East, legislation has made outlaws of our community; where the Supreme Court of India re-criminalized sex between men; and where the death toll among our community mounts from suicide and murder in the Caribbean, Uganda and Cameroon and the Americas.

Adding insult to injury is the fact that transgender people are still denied recognition and classed as suffering psychological disorders that require corrective surgery; the incidence of violence against lesbians and transgender women continues to rise while grossly under reported; and HIV infection rates sky rocket among gay men who are routinely denied access to treatment or criminalized because of their HIV status.

This grim reality is repeatedly splashed on TV and YouTube, newspapers and Facebook -- in stark contrast to news of marriage equality and celebrity weddings in the West. The anti-gay camp kick up a fuss about sex and conveniently leave out any discourse about humanity and rights which are intrinsic to everyone. It's curious that people who are homophobic seem to be more obsessed with gay sex than the LGBT community.

The osmotic effect of the news and statistics is oppressive and weighs heavily over time. Would you feel like holding hands with your same-sex partner after hearing this all your life? How would you feel if your public expression of gender made you into a moving target for violence everyday? How do all these messages inform young minds and children's perceptions of the people around them?

An indicator of what has been learned by the younger generation is found in the colloquial use of the term "gay". In playgrounds, classrooms and social media comments around the world "gay" has become synonymous with things that are wrong, bad, weird, perverted or undesirable.

Connect this playground observation to the adult world, where many men and women have managed to be open about their orientation or identity at work and in the family home, but have done so through a web of euphemisms where the word "gay" is carefully avoided at every turn, not to mention displays of affection carefully kept under wraps.

So while it is urgently important that we end state-sanctioned discrimination and violence against LGBT communities globally, I would argue that of equal importance is the need to reshape and renew the image of LGBT people in our families, homes, schools, offices and social networks; nurture more diverse models of a future that our community could possibly attain and create spaces where people can be themselves. To do so is essential for promoting social harmony, reducing the need for people to hide. Thus we can build more communal trust, make our streets safer and enable people, whether young and young-at-heart, to lead happy lives.

The need for this type of work was recently acknowledged by the Health Promotion Board (HPB) of Singapore. HPB -- a government public health institution that demonstrated leadership this month by publishing frequently asked questions about sexual orientation and gender identity on its agency website. This act makes HPB one of the few state-run agencies in our region that has made information like this widely available.

LGBT community advocates in Singapore hailed HPB's move as ground-breaking. In their critique, advocates found the material to be balanced and evidence-based, urging the agency to do more to help those of diverse sexual orientations and gender identities. Christian extremists were predictably outraged and a social media storm ensued. Given that laws in the island-state's penal code criminalize sex between men and media regulations prohibit any material that is deemed to promote homosexuality, this move by HPB to stand by its duty of care and support the well-being of citizens seeking accurate information on sexuality is truly remarkable. I wish more governments in our region and across the world, would live up to their duty of care for all, without prejudice.

Whether we are gay, straight or somewhere in-between, we are still human; our lives are enriched when we are held, kissed and made to feel loved. For the LGBT community, and our supporters, these simple gestures of affection have become powerful and a radical means of expression and protest. But ultimately I hope we will arrive at a day when my outward affection for my partner is not first and foremost a political statement, but simply an expression of the love and affection that we share.