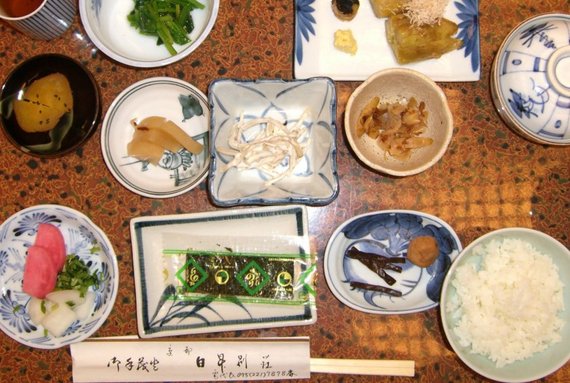 If you've ever read anything about food and eating properly, you've probably heard that breakfast is the most important meal of the day. While modern science says that this tidbit may not be as true as once thought, we're going to go ahead and say that eating a nutritious breakfast is still pretty damned important. The real question is: Have you ever considered dining on broiled fish at 7:30 in the morning?

Click here for 10 Breakfast Recipes for People on the Go.

While many fitness fanatics in the United States are downing nutritious bowls of overnight oats for breakfast, our neighbors across the Pacific are enjoying an entirely different style of breakfast before heading to work. This breakfast, the traditional Japanese breakfast, isn't too complicated, but, when compared to an average American breakfast, you'll see why it's different enough to be deemed article-worthy.

Imagine waking up in Japan, ready for a hard day of work or, perhaps, fueling yourself for an outdoor adventure later in the day. Instead of reaching for a box of old-fashioned oats as your healthy-body-inspiring, energy-packed morning carbohydrate, you'd probably be preparing some white rice (hakumai) or brown rice (genmai) for steaming. This steamed rice (gohan) is the main carbohydrate source for a Japanese breakfast, and it can easily be replaced by rice porridge (okayu). Okayu is enjoyed by Japanese adults and babies alike, and it's often served with pickled plums made with shiso leaves (umeboshi) or vegetables (tsukemono), and this salty breakfast carb source can also be topped with seasoned kelp or seafood (tsukudani) or dried bonito shavings (katsuobushi).

Bodies crave protein after a long night of sleeping, and the way that many Japanese get their morning protein fix is through fish, eggs, and beans. Fish (yakizakana) is usually broiled or pan-cooked and seasoned simply with salt, and by choosing the freshest wild-caught fish at the market, a Japanese diner is ensuring that his or her breakfast is teeming with untainted high-quality proteins and heart-healthy omega-3s. Another protein-packed breakfast staple is tamagoyaki, an egg omelette in which thin layers of egg are rolled and sliced into pieces. Fermented soy beans (natto) and miso soup (miso shiru) are popular ways to enjoy the powerful nutritional profile of beans in the morning.

As you can see, the traditional Japanese breakfast is similar to an American lunch or, most likely, a dinner entrée. The quality proteins and energy-promoting rice in a Japanese breakfast are often served with seaweed that's been seasoned and dried (ajitsuke nori) and fresh salads or other vegetable side dishes (kobachi). While these dishes may not sound too traditional to the American palate, we assure you that your body can benefit from starting your day in traditional Japanese fashion.