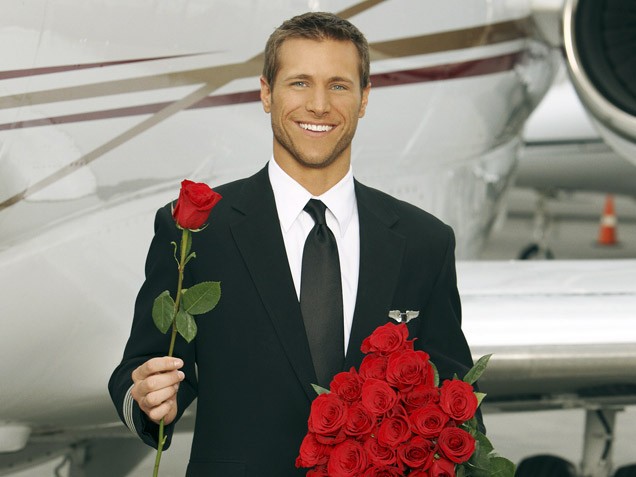 Critics of ABC's 6-year-old reality franchises The Bachelor and The Bachelorette argue that the programming lacks quality, depth and genuine purpose, having produced only one marriage, that of 2003's Trista Rehn and Ryan Sutter. There's also something else very noticeably missing: black people. Wat up with dat, ABC!?

On Monday's season premiere of The Bachelor, hopeless romantic Jake Pavelka was presented with 25 beautiful, sexy gals from which to select his future wife, as he calls her. One after another they made their highly anticipated limo exit and awkwardly walked towards their dream-man (who unfortunately appears to have as much charisma as a gnat). One hopeful paramour even cheesily tripped right into Prince Uncharming's arms in what was clearly a staged damsel-in-this-dress moment. But not one sista in the whole entire bunch. Not a one. Not even a Hispanic chick. There was one Asian woman, but she totally freaked out poor Jake with her bizarre Vietnamese flirting, like she was Linda Blair in The Exorcist speaking in some demonic tongue. The over/under on her, btw, is not pretty.

The same glaring absence occurred on last season's "The Bachelorette," where Jilted-Jillian Harris had all sorts of guys--businessmen, artists, teachers...even several colossal assholes-- to choose from, but not one black dude. And only one Hispanic, Juan the Argentinian, but the only outwardly Latin thing about him is his name. Can't recall for sure, but I don't believe there was even a token Asian guy.

So what the heck is happening over there at ABC? Why the obvious conscious decision to keep the show lily white all of a sudden? Is there not even one smart, strong confident black woman that could've been vying for Jake's attention? Not even one successful, intelligent black man for Jillian? And I say this with a huge grain of salt, and a heavy dose of sarcasm, as the mere ethnic tokenism of these two shows over the years is insulting in and of itself. Out of 25 candidates, you'd think at least 20-30% would be black, Hispanic and Asian. Simply having one never made ABC inclusive.

For Pete's sake, in 2010 there's a black man running the White House, a black man heading the GOP house, but a black person can't get into The Bachelor/Bachelorette house? Did ABC think this glaring absence would go unnoticed? I think the public is owed an explanation.