This past June, the New York City police were called to handle a case of "squirrel torture." When they arrived at the supposed crime scene, they found an immigrant from Ecuador roasting fresh guinea pig over a charcoal fire. He was participating in a custom that is common in his native country but is obviously a little strange in the United States. We are used to seeing our guinea pigs kept in small cages in little kids' bedrooms, not being slowly turned on a spit.

But in small towns throughout the Andes, this scene is played out daily--except the police are never called. Guinea pig, or cuy as it is known, is a delicacy. The meat is prized and tastes like a cross between duck and rabbit. When properly prepared, the meat of a guinea pig is rich, fatty, and flavorful, while the skin, when roasted over a hot fire, gives pork crackling a run for its money.

Although the practice of eating guinea pig seems peculiar to many Americans, enterprising entrepreneurs attempted to bring the meat to the American market back in the 1920s. They called it cavy, a word used to describe any South American, short-tailed member of the family Caviidae. According to Dr. J.A. Roberts, cavy was found in some restaurants throughout Europe. His book, Profit in Guinea Pigs, even provided several recipes for the home cook. He argued that guinea pigs were easy and inexpensive to raise. The return on investment could come from multiple markets, including meat, fur, and live animals for laboratories. (At the time, guinea pigs were commonly used in the Western world to test vaccines.) Despite attempts to market guinea pig as the next best thing, Roberts' venture failed to spark a "Kentucky Fried Cavy" frenzy.

Today, while guinea pigs are best known as lab animals and as the ubiquitous starter pet for young children, their culinary appeal is once again creeping back into the United States. And this time, the introduction is likely to stick. According to the Migration Policy Institute, "Between 2000 and 2010, South American immigrants were the second-fastest growing segment of the Latin American immigrant population." Most have moved to four states: California, Florida, New Jersey, and New York. And like immigrants who came before them, they bring their culinary traditions with them.

For example, guinea pigs can be found in the freezer section of select Latin American supermarkets, especially near communities of Andean immigrants. Public Radio International reported last year that imported frozen guinea pig was selling for $12.99 a pound in a New York City grocery store. 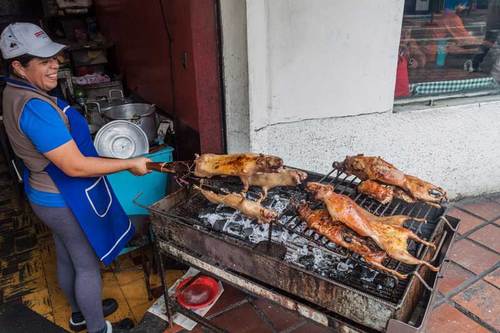 Several mom-and-pop eateries in Queens serve guinea pig once or twice week. The owner of Sabor Latino in Elmhurst, Jesus Inga, says he would like to serve cuy but that only very small restaurants can get away with doing so. He fears getting in trouble with local law enforcement. With a customer base that is 80 percent Ecuadorian--all of them craving the flavors of home, including the occasional plate of roast cuy--Inga knows guinea pig would be a great addition to the menu.

Plus: No Goat Left Behind: Getting Americans to Eat Goat

But, serving guinea pig is actually legal. Under federal law, it's considered an exotic meat--also referred to as game or "non-amenable species"--and its sale is regulated by the FDA. Other meats that fall under this designation and that are frequently consumed are rabbit, bison, and venison.

Some restaurants in Los Angeles, California, another pocket of heavy South American immigration, are serving cuy as well. Although California law prevents any person from selling, buying, giving away, or accepting "any carcass of any animal traditionally or commonly kept as a pet or companion with the intent of using or having another person use any part of that carcass for food," the law seems yet to be tested when it comes to guinea pig.

Not all restaurants have an immigrant crowd to please. And that begs the question if there is a market for raising guinea pigs outside of the South American community. For Peter Platt, one of the family owners of Andina, a popular Peruvian restaurant in Portland, Oregon, the answer is a resounding yes: "Portland is a foodie town and has made a name for itself nationally as a very vibrant indie restaurant scene," he says. "Consequently our local customer base prides itself on being adventurous and trying new ethnic cuisines."

Plus: Ostrich ... It's What's for Dinner

Platt's mother, Doris Rodriguez de Platt, was born in Peru and takes an active role in the family restaurant. She wants to serve cuy in the traditional manner of her hometown, Cajamarca, in which cuts of guinea pig, not including head and feet, are slow roasted in a spicy, garlic sauce and then served with Peruvian potatoes and rice. Rodriguez de Platt would love to share this family recipe with Andina's customers, but the restaurant is unable to offer this dish because Platt believes Oregon law does not directly allow farmers to raise guinea pig for meat. He's not interested in buying imported frozen meat, even if he could do so legally.

However, the Oregon Department of Agriculture (ODA) is ready to work with farmers wanting to raise guinea pigs for meat. Farmers may be subject to USDA inspection while raising the animals, but the license to slaughter and process would be granted by the ODA. Import and export of guinea pigs across state lines require a permit.

Once restaurant owners know that they can purchase locally raised, sustainable guinea pig that is above board and legal in their state, the game changes. It means that frozen imported guinea pig should have competition in the market.

If you are ready to raise and process your own muddle of guinea pigs, one of the first steps is to call your local Department of Agriculture. Be prepared for a puzzled response but know that the federal law should be on your side.

The Cornish Game Hen is a Tiny Liar
Alpaca: The Other Red Meat
Squid Pro Quo
Water Buffalo Wade Into American Dairy Scene
Getting Camel Milk Over the Hump

Weird Food: The Most Dangerous Foods You Can Eat
More:
Taste guinea pigsecuadorhplifestyle
Newsletter Sign Up
An essential daily guide to achieving the good life
Subscribe to our lifestyle email.
Successfully Subscribed!
Realness delivered to your inbox