The current exhibit at Ben Uri Gallery: The London Jewish Museum of Art, titled Cross Purposes: Shock and Contemplation in Images of the Crucifixion, is raising some eyebrows, according to a recent story in the Jewish Chronicle (London).

According to JC writer Marcus Dysch (Twitter handle, JC blog), Benjamin Perl, a patron of the gallery, said the crucifixion show is inappropriate for the venue. "What type of material is this for our Jewish museum? This would never happen in New York or Jerusalem," Perl told Dysch.

But David Glasser, co-chair of the gallery, noted in an email interview that in 2003, Nissan Perez curated a show at the Israel Museum (in Jerusalem) titled Revelation, Representations of Christ in Photography (see some images here). "There is interest to show our exhibition in New York," Glasser said.

According to the Ben Uri Gallery, the show is the first from a museum in the U.K. and the first from a Jewish museum to "trace the evolving representation of the Crucifixion from strictly Christian and religious iconography to a generic expression of anguish, designed specifically to elicit shock and contemplation." 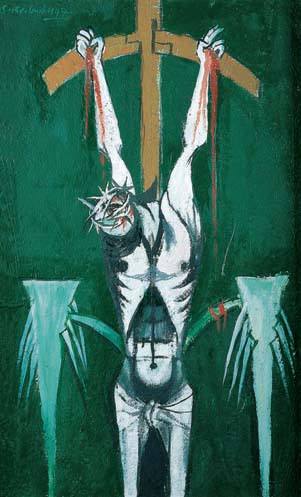 In the interview, Glasser said he hopes viewers, Jewish and non-Jewish, will come away from the show with the recognition that "as behavioural barriers lessen, taboos likewise, and in less than a century what was considered as the most sacred and holy of images -- the Crucifixion -- has evolved into a universal and generic motif."

Asked if the gallery had been concerned in the planning stages of the exhibit about potential public responses, Glasser said yes. "But, we are a mainstream art museum," he added. "So as long as we were sensitive to such areas, we continue."

According to Glasser, the gallery had been planning an exhibition "examining the dilution of holiness in traditional religious iconography" when it discovered Nathaniel Hepburn was essentially addressing the same theme, but focusing solely on the crucifixion. "We met, engaged, agreed to combine and a great fruitful partnership emerged," Glasser said.

In a statement sent out to press, Glasser noted:

Many people will ask why Ben Uri, The London Jewish Museum of Art, is addressing this sensitive subject. We recognise the Crucifixion as an integral part of an artist's repertoire and the diversity of work displayed is as dramatic as the repositioning of the subject from solely Christian and religious to universal and social. Religious iconography of whatever faith within an artistic context is a core part of this museum's, The Art Museum for Everyone's repertoire.

Indeed, not only is Chagall's crucifixion well known, but religious art scholar Ori Soltes 's book Our sacred signs: How Jewish, Christian, and Muslim Art Draw from the Same Source addresses common artistic traditions in the three religions. As Soltes explains, it simply will not do to approach Jewish and Christian art as separate animals.

As I've noted elsewhere, Christian motifs have found their way into Haggadahs in the form of rabbits, and into ark curtains as curly pillars. Even the sudarium, from the Latin for "sweat," believed by some Christians to be the cloth used to wipe Jesus' face before the crucifixion, appears in Jewish legal works.

If the Ben Uri show sheds light on the very real exchanges between Jewish and Christian artists, as well as the universality of a Christian art form, it ought to be celebrated rather than denounced. What we have in the exhibit is art history, not anti-Semitism or something inappropriate for a Jewish venue.