Am I anti-marriage? No. I'm simply saying that as society evolves, so must our perception of marriage. Apparently I'm not alone. According to a report released by the U.S. Census Bureau in October 2006, legally married heterosexual monogamous marriages are no longer the majority of American households, though various forms of marriage-clone relationships continue to flourish. With divorce rates climbing and younger people choosing to not marry, it's time for everyone to take a serious look at unconventional marriage options.

What is an Unconventional Marriage?
Say the word "marriage" and most people envision a man and a woman joined together in a religious ceremony who are living together monogamously in one house and raising children together. That traditional situation can certainly work for some people, but definitely not for everyone.

Being a life coach and having worked with hundreds of people around the world, I've seen many variations of marriage. It's clear that in developing or poor countries, the traditional marriage situation does work for most people. In these countries, the couple is a bonded survival unit. Whether they love each other is irrelevant. They need each other and their children to survive.

Life in developed countries is much different though. We have tech toys, modern comforts, friends and family spread out, and interests beyond work and family. We have children because we want to (usually), not because we need someone to take care of us when we're old.

Because our lives are not focused on survival, we often have two strong individuals with unique outlooks building a life together. And that's where the challenges start. Since we're exposed to so much now, we get bored much easier and need something to keep the spark alive and to keep the relationship well-rounded. So it's about finding a way to stay attracted to the other person and to continue to be satisfied intellectually, emotionally, and sexually in the relationships. While some couples do manage to stay together despite these challenges, as the world gets more and more complicated, so too will the traditional marriage model.

For these reasons, an unconventional marriage may be the key to long-term relationship success. This may include being married but living separately, having an open marriage, living together only part of the year, having a common law marriage, or any other arrangement that works for the couple's situation.

For example, my television producer husband and I live four blocks away from each other. We're independent yet we love each other and have a happy and successful marriage in a city (Hollywood) where the divorce rate is high. Even though we're highly compatible on many levels, we have different lifestyle preferences. I'm a neat freak; he's a collector who doesn't mind clutter. I'm a social person who enjoys frequent entertaining; he prefers to have quiet one-on-one time with someone. While these differences may seem trivial, often it's the little things in a relationship -- the small annoyances -- that drive people apart. Having an unconventional marriage can help eliminate some of the common relationship killers.

What About the Kids?
Many people wonder how non-traditional marriages affect the couple's children. In my experience, they fare just as well if not better than any other children. Think about it... for generations, children have grown up in all sorts of households: with two moms or two dads, in polygamous households, in single parent households, in households where they are living with aunts and uncles and grandparents as their primary caregivers... the list goes on. The exact living arrangement is rarely a reason for any dysfunction; what causes problems are when the children are abused, neglected, or treated harshly in any way. Dysfunction comes from behavior, not from a certain household make up.

For example, my daughter knows that Mom and Dad live in separate houses. That's just how it has always been. She knows we're married and not divorced, unlike many of her friends' parents who are divorced and subsequently uncivil to each other. Her dad comes home after work and plays with her, just like in a "traditional" family. We eat dinner together and tuck her in at night. We're also together on the weekends and do fun family things. If Dad is feeling grumpy one night after work, he can go to his house first to decompress from a hard day and then see the family later, and I have that same luxury. In this scenario, our daughter sees Mom and Dad always happy together rather than fighting, bickering, or being spiteful to each other.

It's Your Marriage - Do What Works for You
This exact arrangement might not work for everyone, but it works for us. And rather than having two houses to maintain, a variation could be that each spouse has their own room, much like how each child might have their own room. In our situation, each person has a separate space, and that makes the marriage stronger. Living separately, we choose when we want to see each other, have a sleepover, or cook dinner for one another. It's not an obligation; it's a choice. We're two individuals who love each other and have each other's back, but don't "own" each other.

Sometimes friends and family comment on why we got married if we choose to live separately, but these family and friends are all on their second or third marriage. Because my husband and I have an unconventional marriage, many fights and disagreements are prevented. Think about the fights in your marriage. Chances are many of them focus on small things, like "He leaves his shavings in the sink" or "She uses all the hot water in the shower." These are the small things that break down the relationship and cause you to nag each other. Once that begins, the romance and emotional connection begin to dwindle.

The high divorce rate we now see proves that the traditional marriage model doesn't work like it used to; it's outdated. And just because something has always been a certain way doesn't mean it's right for everyone. Marriage is no exception. We as a society have to get over what we think marriage should look like. Sometimes the best marriage arrangement for a couple is an unconventional one.

The author and her husband: 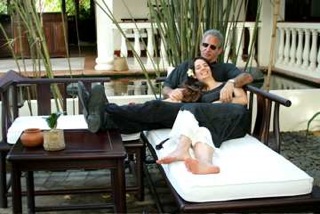 weddingsAfter the Wedding
Go To Homepage

Creator of Transformative Therapy, SoulBlazing and Host of The Legacy Series