Everett Stern didn't realize that becoming a whistleblower would change his life. Not only did he lose his job and career at HSBC, and become blacklisted from the banking industry, he now sleeps with a gun by his bed after receiving death threats on a regular basis. He can barely afford a ticket to New York City to speak at a press conference this Thursday Aug. 29, at noon on the steps of the New York Public Library. But he isn't worried. According to the former bank employee, he will stop at nothing to expose HSBC's continued actions of laundering money for terrorists groups. Although the bank paid a $1.9 Billion penalty in 2012, Stern claims he has evidence that HSBC continued to launder money during his tenure after they admitted that they had stopped in 2010.

"The public needs to know that money is still being funneled through HSBC to directly buy guns and bullets to kill our soldiers. Fines are not acceptable. I want a criminal indictment of HSBC executives," he asserts. "And if I die because of this, my life will have been worthwhile."

A noble cause doesn't mean people will listen to you. During his employment with HSBC as an AML (Anti-Money Laundering officer), Stern found discrepancies and brought them to the attention of his supervisors. Through an Internet search, Stern found a Saudi fruit company was sending millions to a high-ranking figure in the Yemeni wing of the Muslim Brotherhood. Stern also uncovered that HSBC was allowing millions of dollars to be moved from the Karaiba chain of supermarkets in Africa to a firm called Tajco, a company that had been singled out by the US Treasury Department as major financiers of the Lebanese Shiite group, Hezbollah. Stern's supervisors, however, told him to not make waves and keep "clearing the quota of 72 alerts per week."

Stern then took his evidence further, notifying appropriate government agencies such as the FBI, CIA and SEC, about violations of US money laundering laws. All efforts fell on deaf ears -- the excuse being that prosecuting the Too Big To Fail bank would precipitate a financial collapse. Frustrated with the lack of action, Mr. Stern recently decided to take the case public, approaching various media outlets, in addition to Occupy Wall Street. By doing so, he has given up a multi-million dollar whistleblower award.

"This is not a Democrat or Republican issue," he said. "Banks financing drug cartels and terrorists affects every single American. I went to Occupy not because I am a major supporter of the movement. I went because they care enough to hit the streets, carry signs and send a message that I also believe in."

The OWS Alternative Banking Working Group, working in conjunction with Stern for tomorrow's protest, agrees. "Everett Stern is able to give us a mountain of information and point us in the right direction to apply effective pressure," says Cathy O'Neil, the Alternative Banking lead organizer. "In turn, we are able to give him an army of supporters and a populist megaphone with a proven ability to get the public's attention." 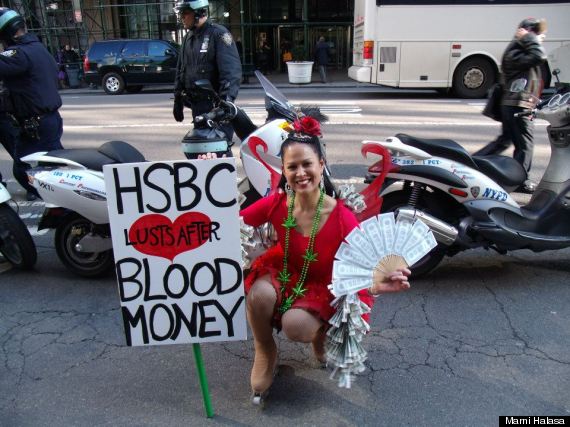 is the founder of Revolution Is Sexy, a one-stop service for crafting media-worthy protest. She is also a Performance Artist, Professional Figure Skater and NYC Parade Personality. As an activist with the Alternative Banking Group, she is also a lawyer and journalist.