Remember all the Apple Fanboys who took to the streets to complain about AT&T in the early days of the iPhone? I was one of them. Apple could do no wrong, but back then AT&T took it on the chin. The network was flawed, the support non-existent, the sales channel disorganized.

Since September, when iOS6 was released there's been a pervasive problem with the iPhone on the AT&T network for users who own the new iPhone 5.

What's been striking - almost unbelievable in fact - is the change in both how AT&T and Apple have approached the problem, and customers.

While AT&T has been forthright, engaged, responsive, and prompt in its dealing with customers - Apple has seemingly forgotten all of the things that has made it such a loved and respected brand among consumers.

How do I know this? Well, the same way that Apple could know it if they choose to read their own consumer discussion boards. Because there are thousands of posts with headlines like "iPhone Data Leak" and "iO6 Data Drain".
Here are a few examples:

Certainly turning off Cellular Data is an option. But...is it what we bought an iPhone for?

I don't want to have to turn on Data, check my email, turn off data.

Turn on data, check a movie time, turn off data.

No. Apple needs to acknowledge the problem and fix it. Not have me adjust my usage to work around a poorly implemented iOS update.

I'm a very faithful Apple supporter. I have been since 1988. But this is trying my patience.

pdy3 writes:
In desperation, I have tried resetting my phone as a brand new device and not restored apps or settings at all and it still uses data across the cellular network whilst on Wifi. Looks like a call to Apple I suppose and wait for the brush off!

vintage42 posted:
my confidence in my trusty iPhone is shaken. And I don't know how useful the iPhone will be with so much turned off.

I'm at home on WiFi 98% of the time and my iPhone continuously ***** in cell data. The data drain is draining my bank account.

APPLE WHEN ARE YOU GOING TO ACKNOWLEDGE AND FIX THIS ISSUE BEFORE ALL THE FAITHFUL GET AN ANDROID?!?

This is absolutely ridiculous.

So, what does it take for the Apple faithful to rise up and turn in frustraition and anger against what has been such a supportive and reliable partner? Well, I've been dealing with this data 'leak' for seven months. I've been into Apple stores on both the east and west coast. Even Palo Alto, I've had my phone replaced. I've had my phone wiped. I've re-installed the operating system. i've removed every possible App. And, I don't watch video on my phone or stream music. I read email. After one particularly long call with an Apple "Senior" Support rep I emailed him this screen capture off my phone. 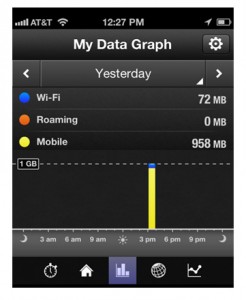 Here's what the Apple response was:

I have reviewed your message regarding the data usage. What I have researched about this issue is the data usage from your iPhone can be high and I understand that a plan with data can be costly. But my input about that is if you can be ok or are able to better manage the data usage the iPhone has, that is great. However, if you feel it is best to change in order to keep a handle on the data your phone uses, that's ok. I am glad to help you with this issue in any way I can.

Read that twice. Try, as I did to understand what Apple is saying? That I should abandon the iPhone? That I should pay for 1 Gig a day? Does anyone reading this believe it is possible to download 1 Gig a day of data without essentially being on the phone from morning until night streaming video? Would even that require so much data? And notice, that this is a 1GB spike, at 3:30 in the afternoon. Not a day of usage.

For what it's worth - this is what my data usage looked like the day after the 6.1.3 update. Nice, even, small sips of data. It lasted one day, the it was back to gulping huge data again. 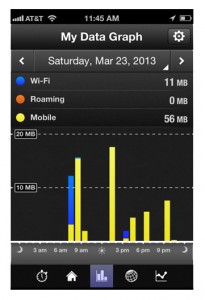 AT&T for their part has been amazing. Acknowledging the problem, rebating back the overages, responding to questions via social media, and frankly trying to get a straight answer out of Apple. But so far, Apple has stonewalled both AT&T and users - placing blame or simply ignoring questions and concerns.

So, it leaves us with one of two conclusions. Either, Apple has lost the internal customer-centric focus that has made it successful. Or, more ominously, Apple knows it has a massive iOS6 bug that overrides WiFi connectivity, creates a data worm that cycles the phone back and forth between iCloud, or Siri, or some other Apple data hungry service and the phone.

No doubt the Apple Ecosystem has become complex. One Apple advisor told me he thought it was iTunes match, a service I don't use. Another suggested it was a piece of little used blogging software.

What matters is that thousands of customers at least are reporting this problem, and presumably the numbers are much higher. Phone bills are hard to manage, and data overages are particularly hard to nail down. To have to monitor usage, call support, replace devices, and be chided with haughty suggests that we should all monitor our data use is sowing the seeds for a massive defection of loyal customers.

I - for one -am thinking Android for the first time in my life. Samsung, I could be your next customer.