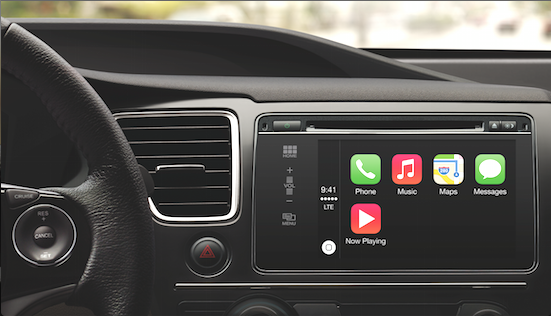 Driving is the most death-defying activity the average American embarks upon. According to the CDC, "unintentional injury" (of which "unintentional motor vehicle traffic" is the leading component) is the fifth most prolific killer of all Americans and the only one not disease-related.

Not only do we voluntarily embark upon these death-defying drives from which a disturbing number of us never return, we add in degrees of difficulty. According to the National Safety Council, nearly a quarter of these auto mishaps are caused by cellphone use, and, back to the CDC, teen drivers ages 16 to 19, the heaviest users of new tech, are three times more likely than other drivers to be in a fatal crash.

Into this maelstrom of self-imposed motorized mishaps steps Apple with its just-announced CarPlay. CarPlay provides seamless interaction with your iPhone through a dashboard touchscreen, a more advanced way of playing with your iPhone while driving -- or, simply a more advanced way to advancing unintentionally into another car or some other obstruction at high speeds.

CarPlay is just one of a series of smartphone-integrated smart car technologies, which include Chevy's MyLink, Ford's SYNC, Chrysler's Uconnect Access, Hyundai's Blue Link, Kia's UVO, Audi's connect, Lexus' Enform App Suite, and a variety of third-party after-market car entertainment/navigation systems using the industry standard MirrorLink protocol, all of make it easier to distract you from the most important aspect of being behind the wheel -- driving.

Don't talk to me

Just like Raymond Babbit in Rain Man, I'm an excellent driver. Well, maybe not just like Raymond Babbit (I always wear my underwear and rarely count toothpicks). Except to pass, I drive no more than 6-7 MPH over the speed limit and stay to the right. I try to keep one car length between me and the car in front of me for every 10 MPH I'm traveling. I try to stay out of people's blind spots and try to keep people out of mine. And despite Satchel Paige's otherwise sage advice, I constantly check mirrors to see who may be gaining on me and look far afield to see where trouble may be brewing.

And then there are the distracted nimrods who drive me. I cringe each time I'm driving with someone else as they search for just the right Sirius satellite radio station or playlist or adjust their GPS while hurtling down the winding and tight-laned New York City thruways filled with crazy car service and cab drivers. I always ask cabbies and livery drivers to end their hands-free Bluetooth phone conversations and concentrate on safely delivering me to my destination.

Multitasking while driving sure is tempting -- tempting fate. Check out these and other scary driving/multitasking myths in this scared-straight National Safety Council infographic:

Provided by The National Safety Council

I consider myself fairly adept at touchscreen dynamics. But during numerous smart car test drives, I found myself with extra butterflies in the stomach tapping the GPS map, tapping to futz with the music and car speaker balance and tone, tapping to check my voicemail, tapping to make a Bluetooth hands-free phone call, all while attempting to stay in lane and out of trouble navigating New York City's chaotic, life-threatening thoroughfares.

Asking me -- or any driver -- to simply ignore touchscreen temptation while driving is like telling a kitten not to attack a knotted string dangled in front of its face.

In a few years, highways will be jammed with smart cars only partially controlled by distracted drivers. If the National Safety Council is right, if ANY multitasking distracts the driver, then lethal macadam mishaps are sure to mount.

Lock your doors and screens

At the recently concluded Consumer Electronics Show (CES), I got demos of self-parking technology from Valeo and Bosch's Bosch Predictive Emergency Braking System (PEBS). The former would be handy, the latter potentially life saving. These are both smart "smart" car advances. I even look forward to totally autonomous cars, which could eliminate the distracted human from the automotive equation, in 20 years or so.

But most humans cannot rub their heads and tap their tummies AND watch you tap your head and rub your tummy while both of you are careening at 60 MPH, essentially the acrobatic contortions these touchscreen smart car systems require.

We can all agree driving while watching a movie, a relatively passive type of multitasking, is a bad idea. But constant physical interaction with that same in-dash screen is not only a good idea but a technological leap to be celebrated?

What am I missing here?

Oh, voice control via Siri. Right. My own experience with car voice control: 3-5 second lag time between command and usually incorrect execution (remember, Siri has to first connect to the cloud), requiring interaction with the touchscreen.

CarPlay and all of these screen-based app/navigation/music operations, except MAYBE GPS maps, ought to be somehow locked, at least to the driver, while the car is in motion. Nothing except GPS, voice and steering wheel operations -- answer Bluetooth call, call/music volume up/down/pause/mute, music skip/radio seek on the steering wheel (and these only as concessions to current distractions) -- should be available, period.

Let's be smart about these stupid smart cars. The life you save may be mine.