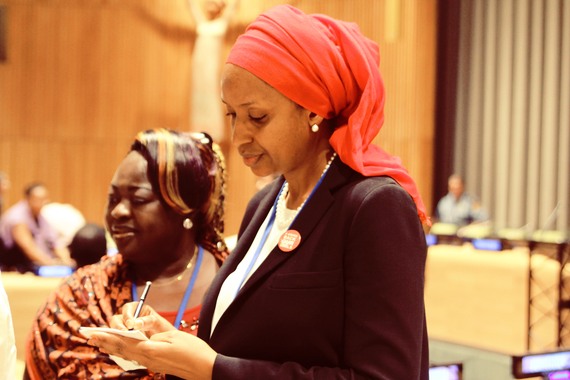 As a social science student and a writer, I'm sensitive to the vanity and self-destructive tendency of many "international awareness" campaigns, especially when they are based around social media. For instance, the Kony 2012 campaign went from news sensation to punchline in a matter of months. Its messy, public failure prompted me to reexamine the assumptions in my own advocacy writing. Prominent political journalists -- like Nick Kristof and Thomas Friedman -- often reduce complex, historically rooted issues to flat Manichean struggles. I worry that many awareness campaigns, led by students with little firsthand experience like myself, can fall into this same simplifying trap.

That's why, when I was invited to cover the United Nations' annual NGO conference last fall, the keynote speaker immediately caught my eye: The founder of the #BringBackOurGirls campaign, Hadiza Usman. I have to admit that my initial reaction was tinged with skepticism. Here, I thought, was a perfect example of the UN's tokenism. What can a person famous for creating a hashtag teach us about international development?

The answer, as it turns out, is quite a bit. Upon hearing Usman speak and interviewing her afterward, my preconceived notions were turned around -- she is a devoted local organizer who has struggled for years to keep her government accountable. If anything, she seemed a bit bemused by the amount of overseas attention the #BringBackOurGirls campaign received, especially the interventionist response it engendered in the US. Instead of vindicating my ideas about hashtag activism, Usman showed me what meaningful organizing can really look like. What follows is a (lightly edited) account of the event that I wrote immediately after her keynote speech.

As the 65th annual United Nations DPI/NGO (Department of Public Information Non-Governmental Organizations) conference wound to a close, I was left with an impression of one theme above all others: inclusivity. The week featured a greater variety of national, communal and personal identity groups than I'd ever seen before assembled in one place, all lobbying for a voice in a document that may well shape the international community's development agenda for years to come. But by the end of the week, the tumult of voices had come together into one harmonious chord: We must be recognized, not just heard. The Sustainable Development Goals (the successor to the UN's Millenium Development Goals) must move beyond tokenism to include genuine representation for a variety of groups, for therein lies the essence of "sustainability" - lasting change, not just fleeting acknowledgement.

The Internet has allowed a number of those voices to reach the world stage like never before. Perhaps there's no better example of this than one of the conference's closing speakers, Hadiza Bala Usman, the tireless Nigerian activist who started the #BringBackOurGirls campaign in 2014 in response to Boko Haram's abduction of more than 200 schoolgirls from the Chibok region. The Internet gave Usman a platform for her message -- had it not been for Twitter, she would probably not have been on stage addressing us that day -- but has that awareness been a prelude to action or a mere substitute for it?

Usman is certainly exempt from the charge of "slacktivism". The daughter of outspoken historian Yusuf Bala Usman, grassroots organizing is in her blood. She founded the campaign despite a close friend's misgivings, saying "If 10 people come out [to the rally], it means that 10 people care." That spirit has guided her organizing efforts, of which Twitter has only been one part - she has held numerous rallies and lobbying efforts in Nigeria.

Throughout the campaign, Usman has stressed systemic change, particularly the need for greater rural school safety in order to achieve the UN's Millennium Development Goal of universal primary school access in Nigeria. Yet I can't help but feel that this clear goal has been diluted through the giant game of "telephone" that is internet activism -- somewhere along the line, the campaign turned from focused local government pressure to an inchoate cry that the Western world should "do something". That's the danger of hashtag activism: it can be a loudspeaker for local voices, but never a substitute for local action.

For Usman's part, she has never abandoned her work on the ground. "We must transcend [the internet]," she said. "My government doesn't react to things on social media. They must see it on the ground... advocacy must compel an action." She emphasized that she wanted to make the Nigerian government publicly accountable for its complacency. That's the guiding principle of the United Nations, and the spirit that should guide the Sustainable Development Goals - the creation of a framework that's large enough for every voice to be heard but also robust enough to defend those voices.

Adapted from a piece published at UN Dept. of Public Information