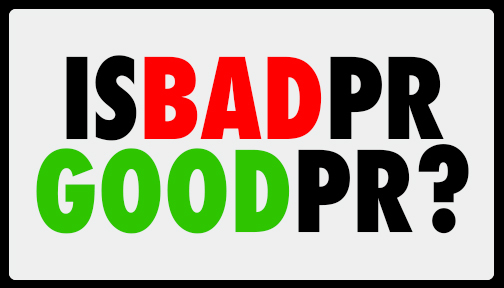 In many ways, business is a popularity content. Companies invest heavily in public relations teams for that very reason. They recognize that their relevance in the marketplace is only as great as the number of people who notice they exist. While attention leads to customers, and therefore is essential to the survival of a business, the chase for attention leads to curious, sometimes even reckless decisions that can irreparably damage a company's reputation.

So why do they do it?

Public relations used to be a much simpler job: a few press releases, a fluff story, and the endowment of a small scholarship was a foolproof recipe for generating positive media attention and widespread praise from consumers. But in today's competitive business climate, marked by growing cynicism and dwindling attention spans, getting your message across on a wide scale is a much more difficult task.

This creates a dilemma for some businesses. Do they stay on the path of virtue, chasing popularity with traditional tactics that are minimally effective? Or do they go for shock value, standing on top of the cafeteria table with a megaphone, demanding attention no matter the indignity.

In other words: is bad PR good PR?

The answer, simply, is no.

Just think about Chipotle Mexican Grill. Chipotle has been in the news a lot lately, and not for the right reasons. The company built its reputation on its "Food with Integrity" mission statement, which reflects its commitment to using organic ingredients and naturally raised meat, and helped propel the restaurant chain to huge success. But in October 2015, the fast casual restaurant was linked to an E. coli outbreak in the United States. Since then, shares for Chipotle stock have dropped and its once untarnished reputation has been scarred.

While Chipotle obviously never intended for this to happen, there's a lesson here: not all PR is good PR. In fact, this is one of the biggest myths ever. Do you think BP enjoyed the ubiquitous attention it received after its infamous oil spill? Or that Malaysia Airlines received a spike in business after the tragic crash of Flight 370?

The cost of risking your business's reputation isn't worth the reward of notoriety. Popularity is only valuable if it's the kind that draws people to actually patronize your business. The five minutes of fame you receive for doing something stupid or careless, intentional or not, will dissipate as quickly as it originated, leaving you with the same perceived problems that you had before with an even worse reputation.

Building your business on the strength of stunts and hoaxes is not a sustainable recipe for success. Good public relations, combined with steady diet of data-driven marketing efforts, is a much more reliable way to grow your business.