Betty White is a national treasure. At 90, she can deliver a line with perfect timing, subtlety and innuendo like few actresses in Hollywood.

She's not only amazingly talented, she has become the ultimate demographic crossover character on television; audiences of all ages love and admire her. White's recent 90th birthday special on NBC was the most watched program of the night, with nearly 14 million viewers.

White makes 90 look exciting and she's being rewarded for it. I'd wager that White is making more money in Hollywood than any 90-year-old actress ever. This is good news for everyone. She's smashing stereotypes and providing an extraordinary example of positive aging. 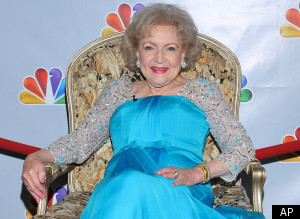 Which brings me to White's new TV show. Off Their Rockers is described as a hidden camera-style show in which old folks prank young people. I was hopeful it would be something new, clever and exciting that shined a positive comedic light on aging.

I was sadly disappointed. Off Their Rockers is Candid Camera all over again, except that the gags are all executed by old people. Or, more accurately, middle-aged actors right out of central casting pretending to be old. The problem is that the gags are silly and the laughs are still at the old people's expense.

How is an old woman in a motorized cart driving up behind pedestrians and rudely blowing her horn to scare them even remotely clever or funny? It's stupid and sophomoric. In another bit, an old geezer sits down next to a young couple and starts bragging about his red-hot sex life with "the old lady." Imagine their surprise when the old lady shows up and she's a 20-something knockout. Given that the old guy was such a loser, the only thing to assume from the laughless bit is that the young thing is a gold digger. This bit makes everyone look bad, except the young couple being pranked.

In another bit, an old blind man asks for help from a young man who graciously stops to assist. The blind man gets in a parked car, fires up the engine and drives off while the young man pleads for him to stop. Again, the young people are kind, sane and helpful. The old people are idiots. Yuk. Yuk.

These moronic, cliché-ridden bits, undoubtedly written by young people, are interspersed with shots of Betty White fawning over young, ripped hunks in hot tubs. Please. It's demeaning to everyone and only serves to perpetuate nearly every negative stereotype of age. There is nothing original, nothing clever and very little funny about Off Their Rockers.

NBC executives can't be blamed for trying to ride White as long and as far at they can, but if they think this show will appeal to the older demographic or hold the attention of younger viewers for long, they're off their rockers.