When Illinois Governor Bruce Rauner was elected in 2014, he ran on an anti-tax platform. But is he trying to sneak a tax increase past voters that he never called for in last year's campaign?

When businessman Bruce Rauner ran for the top spot in Illinois, he made taxes a big focus of his election. Here's the exact message his campaign site said during the 2014 election:

Illinois' tax system is holding the state back and hurting the middle class. Read below to learn more about what Bruce would do to improve Illinois' tax climate:

A broken tax system. Giveaways for big businesses with no regard for the small businesses that are the jobs engine of our economy.

The result? Among the highest taxes in the nation and the worst unemployment in the Midwest.
We need to completely overhaul the tax code; not just tinker around the edges. To do that, we can:
• Get rid of the Quinn-Madigan 67% income tax hike.
• Get rid of the Quinn-Madigan 45% corporate tax hike.
• Ensure your property taxes never go up if the value of your home decreases.
• Overhaul the tax code so that it's fair to all taxpayers. 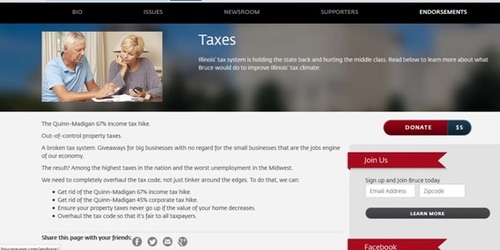 For those who don't know, Pat Quinn was the Democratic Party incumbent at the time.

Well, what a difference a year can make. At a speech at the University of Illinois, GOP Governor Rauner called for an expansion of the sales tax. According to Jessie Hellmann and Ray Long with the Chicago Tribune, Rauner wants to expand the state's sales tax to the service economy.

"The idea of expanding the state's sales tax base to include services, such as on auto repairs, dog grooming or haircuts, has been debated in Illinois since the late 1980s," Hellmann and Long write. "Expansion efforts repeatedly have stalled in the face of heavy resistance, but Rauner outlined how he thinks Illinois is 'out of balance' with other states."

And there may be more changes in Illinois taxes. "Expanding the sales tax is one of the few items Rauner repeatedly has mentioned as a part of an unspecific overhaul of the entire tax code, saying Illinois can't 'just nibble around the edges,'" Hellmann and Long add.

It's a similar story to Wisconsin Governor Scott Walker, whose 2010 campaign site said nothing about unions, and made sticking it to state unions his primary policy once elected governor.

David Rutter of the Chicago Tribune calls Rauner the best governor in the Midwest, although if you actually read his column, he notes that there are some pretty weak governors in the region (including Walker).

In the land of "Honest Abe" Lincoln, Illinois voters may wonder what other surprises Rauner has in store that he didn't share with the voters on the campaign trail.

Did Illinois Governor Bruce Rauner mention he was increasing the sales tax by applying it to the service industry? A savvy reader provided several links to show me examples where either Rauner may have mentioned it, or someone in the media did, during the election.

Exhibit A is a blueprint that calls for "modernizing the sales tax" on pages seven and eight. Smart readers will now add a new term to their political dictionary. When you are "modernizing" a tax, you're either creating a new one, or increasing the old one. The Stamp Act of 1765 was an attempt to "modernize" low British taxes on American colonists, for example. Low taxes are so old-fashioned. Illinois voters will be more politically street-smart during the next election.

Exhibit B was hard to read, but it lists several services and how much could be raised by them. I can only suspect that it's a pro-Rauner site, about as opaque as the last one.

But if it's about raising taxes on the people of Illinois, where was the Illinois Tea Party? They must be led by someone the equivalent of hapless Chicago Bears Coach Marc Trestman to have not issued even the mildest of rebukes. Then again, the Tea Party may be changing their acronym from "Taxed Enough Already" to "Taxes Enlarged Actually."

Exhibit C was an argument by the Illinois Observer, discussing Rauner's plan. If the person who sent me the link hoped to boost Rauner, it was a dismal failure. It points out that the new Illinois Governor was engaging in deceptive practices, railing against taxes during the primary, only to keep many of them around, perhaps "phasing them out" over time. The editor also points out that not all service sales taxes would be increased. They would be raised on services affecting Democrats, like legal fees, instead of business transactions utilized by Rauner and his supporters. The editors feel it would hurt the middle class. They also echoed those same vague phrases as "modernize" and "broaden" the tax base.

The editor of the Illinois Observer curiously called this Nixonian deceptive practice of running conservative during the primary and moderate during the general election "courageous," though true courage would be admitting that this was done simply to procure votes and win.

I asked this emailer, and several other critics who contacted me claiming that Rauner did talk about sales taxes, why he chose to omit them from his website section on issues solely devoted to taxes, only to introduce the item as one of his first proposals in his first month in office. Not one person had an answer. I didn't even get the new excuse of "the intern must have been responsible." I did get the "Well, Governor Quinn did it too!" Oops.

This must explain why Rauner's approval ratings have plummeted, and why even fellow Republicans are hedging about his union plans. It's a shame, as Rauner has some pretty good ideas, similar to Quinn's, including a new retirement savings account, provided it's not taxed too.

But the message for Republicans is clear. Rauner correctly called out Quinn for running on one thing in 2010, and implementing another one afterwards. He should learn this lesson, lest he share the same electoral fate as Pat Quinn.

_______________
John A. Tures is a professor of political science at LaGrange College in LaGrange, Ga. He can be reached at jtures@lagrange.edu.