A quaint historical museum in Pin Point, Georgia, that is set to open this fall has become the target of an exhaustive ethics examination by the New York Times. Why would the Times devote almost 3,000 words to a community heritage museum? Pin Point, as it turns out, is also the birthplace of Supreme Court Justice Clarence Thomas, and it was Thomas who introduced Pin Point residents to his friend Harlan Crow, a Dallas real-estate tycoon and major conservative donor, who would ultimately fund the museum. According to some legal analysts, Thomas's role in Crow's decision to donate may have troubling ethical implications. 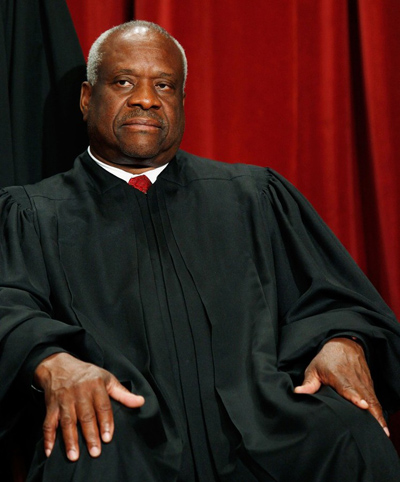 Pin Point lies along the Gullah/Geechee Cultural Heritage Corridor designated by Congress, a passage of coastal fishing towns settled by the descendants of slaves. Algernon Varn, whose father ran the fishing cannery there, long hoped to save the site from development, but it wasn't until he bumped into Thomas, who was in town promoting his memoir, that the project began to move forward. Thomas introduced Varn to Crow, a longtime friend. Through an exhaustive paper trail review, the Times confirmed that Crow is the anonymous donor behind the $1.3 million restoration of the property and forthcoming museum project. Varn was told to keep Crow's identity anonymous.

The question of ethics violations comes down to whether Thomas misused "the prestige of office" to persuade Crow to take on the project, said Raymond J. McKoski, a retired state judge in Illinois. (Supreme Court justices are not explicitly bound to the complex code of conduct for federal judges because it is enforced by lower ranking judges. That's right, they are literally above the law -- though the Times points to several justices who said they adhere to it regardless.) "Some of it depends on the conversations that took place," McKoski told the Times of the ethical quandary. "Who brought up the idea? How willing was Mr. Crow to do it? What exact questions were asked by Justice Thomas?"

This isn't the first time Crow has donated to projects directly or indirectly honoring Thomas. (According to the federal ethics code, judges are not supposed to know who makes a donation in their honor.) The Times gathers an exhaustive list of shady gifts and donations, including Mr. Crow's financing of a Savannah library dedicated to Justice Thomas and his gift of a bible that once belonged to Frederick Douglass. Thomas also received a $15,000 bust of Abraham Lincoln from a group affiliated with Crow.

So, after all this commotion, what will the museum actually look like? The modest, almost astonishingly unglamorous-sounding Pin Point Heritage Museum will be housed in the A.S. Varn & Son Factory, a former seafood cannery that was the economic backbone of Pin Point -- and where Thomas's mother worked as a crab picker -- until it closed in 1985.

Each structure on the property -- including the oyster factory, can storage building, and marshfront dock -- will be stabilized and restored. A patio area will host live demonstrations of crabbing, canning, and shrimp net making. Inside, 3,000 square feet of exhibition space -- modest by museum standards -- will house educational exhibits, live demonstrations, interactive displays, and a 30-minute documentary film, all devoted to the generations of residents in Pin Point.

More of Today's News from ARTINFO:
The Purloined Warhol?: Missing $30 Million Farrah Fawcett Portrait Discovered on Ryan O'Neal's Wall... On His Reality Show
"Most of the Art World Wants Me to Commit Suicide": Photographer Nan Goldin on Her New Work and the Imposition of Being a Living Artist
The Mysteries of Maya Civilization Are Unveiled at Paris's Musée du Quai Branly
Why the Brooklyn Museum's Cancellation of "Art in the Streets" Paints a Dire Picture for New York
Reclusive Art Maven Huguette Clark Emerges From the Shadows in Death, Finally Revealing Her Renoirs and Monets to the Public