How to deal with our carbon problem in lieu of climate change was the big question being asked on Monday September 22nd at the Rodale Institute.

We heard from such speakers such as Dr. Vandana Shiva; Ronnie Cummins of the Organic Consumers Association; Mark Smallwood, the head of the Rodale Institute; Andre Leu of IFOAM; Dr. Richard Teague from Texas A&M University; and Tom Newmark, Co-Founder, The Carbon Underground.

Scientists and world leaders of agrarian reform met to discuss how to reverse climate change by bringing excess atmospheric CO2 back home to the soil, where, as soil carbon, it can improve food production, resilience to climate extremes, and water management. And yes, actually, quickly remove the perilous excesses of CO2 that threatens humanity.

Tom Newmark led the presentation with an analogy: imagine a morbidly obese patient going to a physician. Weighing 400 pounds, the patient struggles daily and fears for the future. The physician makes the obvious diagnosis: you're severely overweight, he tells the patient. You need to go on a diet! So the doctor then maps out a diet that will keep the patient from gaining any more weight, but will keep him at 400 pounds. The patient is bewildered, but that's all the physician has to offer. Just don't gain any more weight.

And that's where almost all of the discussion about climate change resides: at the bewildering place where the patient -- Mother Earth -- is at 400 parts of CO2 per million, and all the environmental "doctors" talk about are desperation diets to try to keep the planet from going too far above 400. There is virtually no discussion of how to remove CO2 from the atmosphere -- how to get the patient back to a state of real health.

We continue to be dependent on the industrialized fuels such as oil, coal, and gas at a pace that is no longer feasible. The world's agri-business is increasingly industrial, and this agricultural malpractice directly contributes up to 30 percent of greenhouse gas emissions, more than the transportation and utility sectors.

And we continue to do business as usual as we witness a deep climate reality with more hurricanes, tornadoes, fires, etc. So why aren't we on a weight-loss diet?

As we all know, CO2 is a natural part of life on Earth. We are made of carbon. The problem has been evidently laid out since the Industrial Age: we have put exorbitant and highly dangerous amounts into our atmosphere. According to studies, the maximum acceptable level of CO2 in the atmosphere appropriate to maintain natural systems critical to human civilization is 350PPM or Parts Per Million. We are presently at 400PPM and rising, meaning we need to not only reduce our current emissions but also concurrently bring down or sequester what's in the atmosphere. What's even more staggering, if all current emissions stopped today, it is estimated that we would need to bring back 100 to 200 billion tons to get back under 350PPM.

And it would take hundreds or thousands or years to get back to normal, even if all fossil-fuel emissions magically stopped.

The Role of Sequestering CO2 in Agriculture

So the BIG QUESTION: How does the CO2 from the air get sequestered? Dr. Christine Jones, one of the world's leading carbon-cycle scientists, describes the "liquid carbon pathway" -- a process whereby plants absorb the CO2 from the air, break it down via photosynthesis into carbon and oxygen, and then combine the carbon with hydrogen from water to create sugars, hence "liquid carbon." This liquid carbon flows out through the roots into the soil where it is stored and able to be reused by nature. The oxygen, as we know, is released for us to breathe, yet another example of nature in its balanced state.

So what is it about regenerative agriculture farming? It's all about our soil. A healthy soil will comprise high levels or carbon rich organic matter. Healthy soil, in fact, relies on carbon to promote healthy plant growth. During photosynthesis, plants draw carbon down from the atmosphere -- in the form of CO2 -- to use in the creation of sugars and starches, for bartering with microorganisms in the soil, for nutrients such as phosphorus and nitrogen. This is part of nature natural living system, where nothing is wasted; everything is re-used in the cycle of life.

We are not talking about inventing some new untested technology like 'carbon capture' that requires billions of dollars of investment and years of testing. We are talking about upscaling current existing good practices used by organic farmers. This is the cheapest solution. All that is needed, is training and good technical assistance to farmers. With a fraction of the billions of dollars earmarked for the current suite of untested technologies, we could easily help all farmers transition to organic methods in a few short years and reverse climate change.

The critical point here is that a healthy soil sequesters CO2. However, unhealthy soil resulting from industrial farming and ranching actually releases CO2, contributing to the destabilizing of natural systems, including the climate. Today, the single largest source of all CO2 emissions is unnatural farming techniques, more than from energy production of transportation. If we follow nature's rules, and abide by the principle of nature, we can return our soil back to a healthy vital normal system, which research shows, will begin sequestering carbon at rates that actually reverse climate change.

"Reversing Climate Change is possible through simple photosynthesis and healthy soil biology. It's simple. It's fourth grade science, with no downside. The global transition to an organic planet is already underway, it's happening now. The organic movement is stronger than ever with growth that far exceeds conventional agriculture. This is not too good to be true -- yet it is indeed good, and it is true." - 'Coach' Mark Smallwood, Executive Director, Rodale Institute

Additionally, food grown in a regenerative manner means healthy soil, which is not only a carbon sink but also a water sponge. In fact, every percent increase in soil organic carbon retains 60,000 gallons of additional water per acre. According to the Rodale Institute's long-term study, this "wet sponge" means that in drought times the soil produces up to 30 percent higher yields than industrially farmed soils under the same conditions.

Too much of the discussion up until now surrounding global warming and the climate crisis has been gloom and doom. The good news from millions of organic farmers and ranchers around the world, backed up by a critical mass of scientific data, is that the qualitatively enhanced plant photosynthesis resulting from regenerative organic farming, ranching, and land use practices can remove several hundred billion tons of excess carbon from the atmosphere and safely store this carbon where it belongs, in the living soil. This will buy us the time we need to reduce fossil fuel use by 80-90 percent over the next few decades and reverse, not just mitigate, global warming. The further good news is that this global transformation of our food, farming, and forestry practices can also reverse rural global poverty and deteriorating public health. The world's 2.8 billion small farmers and rural villagers, allied with conscious consumers, can and will cool the planet.

In a world where famine and water shortages continue to rise, regenerative farming may be another compelling reason of nature's guiding hand teaching us to follow nature's path. 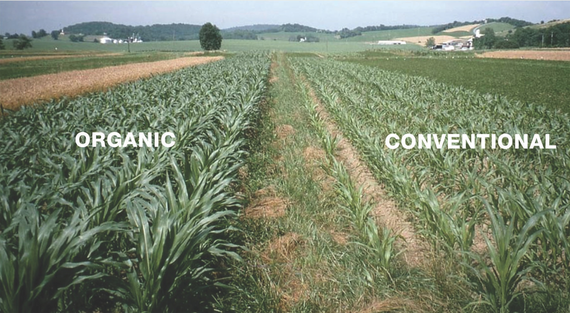 Greg Reitman is a new breed of filmmaker who combines a background in writing, producing, directing, and activism. In 2000, Greg founded Blue Water Entertainment, an independent production company focusing on environmentally conscious entertainment. He recently produced the 2008 Sundance Audience Award-winning feature documentary "FUEL." The tremendous success and critical acclaim generated by "FUEL" garnered Mr. Reitman the sobriquet 'Hollywood's Green Filmmaker.' Greg is also a contributor to The Environmentalsit and The Huffington Post.