With Bunkerville crisis, NRA reaping what it has sowed through decades of insurrectionist propaganda

"There never was a government without force. What is the meaning of government? An institution to make people do their duty. A government leaving it to a man to do his duty, or not, as he pleases, would be a new species of government, or rather no government at all." - Second Amendment author James Madison, during the 1788 Virginia Ratifying Convention

A potentially bloody tragedy was averted on April 11th when federal agents withdrew from the Bunkerville, Nevada ranch of Cliven Bundy following a tense-standoff in a dispute over grazing rights. Despite having a court order that allowed them to impound cattle of Bundy's that were trespassing on federal land, Bureau of Land Management (BLM) officials were forced to retreat and return his livestock after a "1,000-strong coalition of armed men" gathered at the ranch and made it clear they were ready for a shooting war. A BLM statement said the retreat was required because of "serious concern about the safety of employees and members of the public." 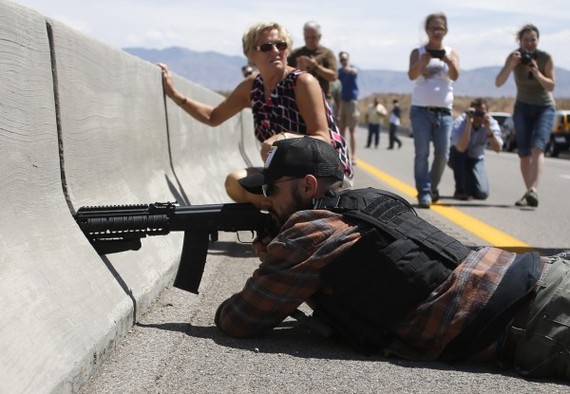 The armed gathering of pro-gun activists, anti-government groups and right-wing-politicians at Bundy's ranch did not happen in a political vacuum. It was the result of decades of propaganda from the National Rifle Association (NRA) and other gun lobby groups; propaganda that (perversely) informs Americans that they have an individual right under the Second Amendment to shoot elected officials, law enforcement officers, and military service members if they sense our government has become "tyrannical."

There is certainly nothing "tyrannical" in the behavior of the Bureau of Land Management. The agency was founded in 1946 and administers 245 million acres of public land in 12 Western states. They have shown remarkable patience and restraint in their dealings with Bundy, which date back two decades. In 1993, Bundy stopped paying federal grazing fees. Since that time, he has expanded the range of federal land on which he is trespassing. As BLM noted, "This is a matter of fairness and equity, and we remain disappointed that Cliven Bundy continues to not comply with the same laws that 16,000 public lands ranchers do every year. After 20 years and multiple court orders to remove the trespass cattle, Mr. Bundy owes the American taxpayers in excess of $1 million."

In short, Bundy is putting his own interests first while denying the right of other Americans to democratically decide how best to use public lands.

It's clear that Bundy is not serious about redressing his grievances through the democratic process. He has previously declared, "I don't recognize [the] United States government as even existing." Bundy fancies himself a Sovereign Citizen, and embraces radical Posse Comitatus theories regarding the supremacy of the county sheriff as legal authority. It was therefore baffling to see U.S. Senator Dean Heller (R-NV) describe Bundy and his armed followers as "patriots." If a "patriot" is someone who doesn't recognize the government established by the U.S. Constitution, and who violently confronts it, then what exactly is a "traitor," Senator Heller?

Republican Nevada assemblywoman Michele Fiore also praised Bundy and boasted, "This is the first time we went arm to arm with the federal government."

Actually, no it's not. Long before there was Cliven Bundy there was Daniel Shays, the Massachusetts farmer who led an armed uprising in 1786-1787 against what many viewed as oppressive debt collection and tax policies. His rebels forcefully shut down local courts, but were eventually routed by state militia forces and disbanded. Shays' Rebellion so alarmed our Founders that it became a major impetus to scrap the Articles of Confederation and establish a new form of government with a more energetic, capable federal sector. When Federalist James Madison drafted our Constitution, he made it clear that the role of the Militia was to "suppress Insurrections," not to foment them. And the crime of Treason was defined in the Constitution as an act of "levying war against [the United States], or in adhering to their enemies, giving them aid and comfort."

Our Founders continued to use the Militia to put down insurrections after the Constitution was ratified, including during the 1791-1794 Whiskey Rebellion, which was initiated in response to a federal excise tax. It was then that President George Washington rode out at the head of a militia force of 13,000 men to confront and disband the rebels, whom he deemed "insurgents." The bottom line is that our Founders did not hesitate to deal harshly with extremists who believed they could engage in violent resistance to the rule of law. [The comparison of Bundy to Washington by some right-wing commentators is literally laughable.]

The NRA, on the other hand, promotes a very different message, which emboldens pro-gun activists to turn their weapons on those enforcing the rule of law. Who can forget NRA CEO Wayne LaPierre's famous declaration that "the guys with the guns make the rules" at 2009 Conservative Political Action Conference? Or how about when Glenn Beck proclaimed that "universal access to firearms is indistinguishable from Emancipation" during his keynote speech at the 2013 NRA Convention? "A lot of times people couldn't do anything about [oppression] because they didn't have a gun, because their right had been taken away by the government," Beck told the audience. "Racists like James Earl Ray killed one. Disturbed killers like Adam Lanza killed 26. But history shows government kills millions." [Actually, the history of democracies shows exactly the opposite.]

It was another NRA luminary who suggested putting women in the frontline at Bunkerville. "We were actually strategizing to put all the women up at the front," said Richard Mack, the head of the radical Constitutional Sheriffs and Peace Officers Association and the NRA's Law Enforcement Officer of the Year in 1994 while serving as a plaintiff in their litigation to overturn the Brady Law. "If [federal agents are] going to start killing people, I'm sorry, but to show the world how ruthless these people are, women needed to be the first ones shot ... I would have put my own wife or daughters there, and I would have been screaming bloody murder to watch them die."

Thankfully, disciplined federal agents never gave Mack a chance to implement his macabre plan. In truth, the actions of the BLM at Bunkerville--which have consistently emphasized diplomacy and the safety of the public over the use of force--belie all hyperbolic claims of "tyranny."

Our Founders feared anarchy as much as tyranny, of course, and unfortunately anarchy is the direction the pro-gun movement is moving our country in. As Steve Benen of MSNBC noted, the Bundy camp sends the dangerous message that "you, too, can ignore the law and disregard court rulings you don't like, just so long as you have well-armed friends pointing guns at Americans." U.S. Senate Majority Leader Harry Reid was even more direct, stating, "These people who hold themselves out to be patriots are not. They're nothing more than domestic terrorists ... We can't have an American people that violate the law and just walk away from it." George Washington certainly would have agreed.

With the next NRA convention just around the corner this weekend in Indianapolis, it will be interesting to see what their leaders have to say about the recent crisis in Bunkerville. Will Wayne LaPierre, Ted Nugent and the rest reap what they have sowed and embrace Cliven Bundy as a poster child for "Second Amendment freedoms"? Or will they back pedal, sensing that the next Cliven Bundy could look a lot more like cult leader/child rapist David Koresh or Oklahoma City bomber Timothy McVeigh?

If the NRA continues to stoke the fire with anti-government sentiment and insurrectionist ideology, and pro-gun activists soon get that shooting war that so many of them are itching for, you can be certain that all eyes will turn to that tall, blue-glass building in Fairfax County, Virginia. Talk about "civil war" and violence in the pursuit of "freedom" might sound glamorous in the abstract, but if Americans were to see images of bloody battles, body bags and mourning relatives on their televisions, they would quickly see insurrectionism for what it is: absolute poison to our democratic, virtuous way of life.