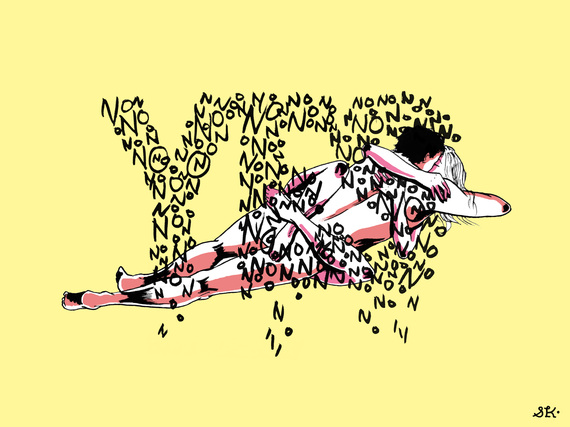 He pinned me to the bed, stretching me like a sadistic yoga instructor, and in my inebriated state, thought to myself, "Well, this isn't fun." I felt my knee touch my ear. I realized that I couldn't physically move, and suddenly, I felt that visceral fear that something very terrible might happen to me.

So, I tapped him on the shoulder and said, "This isn't working for me."
"Are you sure?" he asked.
"Yes," I responded with a semi-casual but firm tone, "I do not consent."
And he got off.

The next day, I unpacked the night's events with one of my closest female friends and went through a rapid succession of spiraling thoughts. How could I have let it go so far? Why didn't I say anything sooner? What would've happened if I hadn't spoken up?

She just smiled sadly and said, "Welcome to life as a woman." And in that moment, I had three very sobering realizations:

1. Consent and control of my body were things I had never worried about prior to that night.
2. Most women have grappled with these issues for most of their lives.
3. In our society, the ways in which we learn about sex are highly gendered and focus on denial and negation rather than permission and consent.

I believe that the social practices we are shown in our youth set the baseline of what we assume is the norm in our adult lives. I think this is one of the main reasons why we've run into so many issues surrounding consent and sexual assault. Our society not only perpetuates a sexual system that teaches young boys and girls different narratives, but also revolves around the word "No."

Upon further reflection, I realized that even as a sex-positive, male feminist, asking for affirmative consent was not a part of my sexual habit. I was taught that its negation -- NO -- was the most powerful word a partner could level at me. "No means no." "If they say no, you stop." These were the narratives adults parroted at me growing up, and that's great. But at the same time, I was never taught to actively ask for a "yes."

Instead, we are led to believe that men who do ask for consent do so because they are unsure of themselves. They are unconfident, unmanly, and unsexy. In contrast, "real" men don't ask for a yes; they wait for a no. This is the unspoken narrative that we, as boys, learn at a very early age as the baseline of what being a "good lover" looks like.

Society told her that sex was something girls had to protect. It was something others wanted to take from her that she had to safeguard and deny access to until the right time and partner came along. While the adults around her taught her how to say no, physically and verbally, they never had a conversation with her about when and how to say yes to sex when she was ready and willing.

When I told her about my hookup gone awry, she confided in me that the same thing happened to her. She had a casual hook up that went too far, and found herself in bed, physically dominated by her partner, unable to move. But instead of saying something, she froze. When I asked her what she ultimately did, she said, "I just lied there and hoped it would end soon."

She wanted me to know that she wasn't raped. Her partner hadn't sexually assaulted her. However, the hookup got to a point that was no longer consensual, but she didn't know how to communicate this. After two and a half decades of being taught how to say no, she discovered that consent was not something she had been taught to voice. She knew how to deny sex before it happened, but was unsure of how to take ownership of it once it began. As we talked about this, I realized that this female sexual narrative overemphasized denial and prohibition, devaluing permission and consent. And that is not okay.

We need to reframe the ways we teach our kids and society about sex. We need to teach boys that asking for consent -- seeking a yes, not waiting for a no -- is sexy. "Is this okay with you?" "Do you like that?" "How's this?" are all questions men should be comfortable with and expected to ask. We need leading men, fathers, and other role models to showcase this behavior, demonstrating that this active consent seeking is part of what properly socialized men, and eventually lovers, do without second thought.

We need to teach girls that ownership, not denial, should be the center of their sexual identities. We must curtail the narrative that they are guarding something that others want to take from them, and that saying no is their primary source of agency. Instead, they own something that is inherently theirs. Their comfort, pleasure, and bodies are theirs to do with, and they choose when and with whom they seek that pleasure. "YES" ought to be reframed as the most powerful word in their arsenal.

I believe if we can integrate these messages into our cultural narratives, we can reshape our society's sexual focus from that of negation to that of consent and mutual respect. Boys will grow up actively soliciting consensual language, and girls will feel comfortable actively providing it. And 20 years from now, when my kids see a James Bond film, when Bond pins his partner to the bed, she will say, "Not like that." He will promptly get off, let her readjust and whisper, "Is that better for you?" And she will whisper back, "Yes."