Here in the U.S. you can't channel surf without coming across a news information show that is profiling the crimes and punishments of our communities. One of the redeeming qualities of these shows is they make unlawful acts and the consequences transparent to the community and the nation. There is no way the acts of an abuser could be swept under the proverbial rug once he or his victim appears in the media. In essence we rely on public outrage to hold lawmakers accountable for enforcing the law. 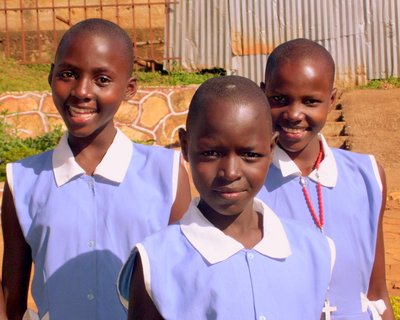 So what happens to girls and women in the developing world who are abused without this level of transparency and education about the law? Do they know their rights? Do they see consequences for their abuser? In most cases crimes go unreported, attackers endure no punishment and crimes are repeated -- in silence.

One of the scholarship girls from our Mandela Project programs was home from school break when she was raped and impregnated at 13 years of age. The family didn't know where to turn, or how to press charges. The only way they knew to settle the issue was to accept a cow from the assailant's family -- in essence the family exchanged the young girl's innocence and the subsequent child born for the value of a cow. That's unimaginable to us.

Another woman in the Ugandan communities we support tried to take her child to seek medical care against her drunken husband's wishes. He attacked her with a machete, almost decapitating her. After she was treated at the hospital, the only place for her to go was back home -- the place where her assailant lived. She didn't know how to access the justice system to protect her.

The questions I kept asking was, "How can anything change if these basic human rights are not protected? How can we prevent human rights abuse so it does not show up in the hospital as a health issue?"

In both of these cases, the laws regarding abuse are in place, but the hospital workers were not trained in legal issues, and police often require a bribe to take action. There is no 24-hour news feed spotlighting these crimes, igniting outrage and holding law enforcement and lawmakers accountable.

With the help of the female attorneys I met at The International Colloquim on Women's Empowerment, our Project Justice program was created. We now teach entire communities about the law: land rights, women and children's rights. The program also trains hospital staff to become paralegals who know the law and how to enforce it.

Project Justice also conducts workshops with the lawmakers and police at the local level so that there is a transparency within law enforcement. When they know the community is educated and is watching them they have to act.

Because of Project Justice the girls and women know there are people on their side; we are building a resource for those who up to this point have not had allies in strong community positions.

It costs just $10 per community member to educate them about their legal rights and how to protect themselves. Imagine the impact this will have on limiting the spread of disease, the ability for women and girls to be an economic force and to raise their children with respect for themselves and the community. When human rights are protected, hope and development can spring forth.

We have ambitious and far-reaching goals for this project over the next three years, but we can't do it without you. You can make the biggest difference in a child's or mother's life by giving them the hope of a compelling future. Please support our efforts by donating.