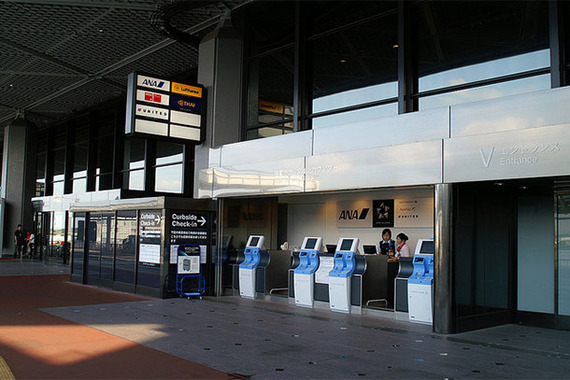 What's the first thing that pops into your mind when you think of curbside check-in? For me, it's a vague 1970s-toned image of a suitcase without wheels being hoisted out of a wood-paneled station wagon and into a pile, while a mustachioed skycap lassoes each with a bag tag.

If you have more recent, less sepia-toned associations with curbside check-in, you're onto something. And if you don't think much at all of the airport curbside option, maybe it's time you should.

Related: 7 Common Mistakes That Will Make You Miss Your Flight

For years, I've been traveling carry-on only, breezing past the airport curb with nary a second thought. Some part of me has long considered the notion of curbside check-in a throwback to a time when checked bags were free and everyone traveled with half their wardrobe. How quaint.

But on a recent family vacation that involved two car seats and a large suitcase, I started to rethink this assumption. And I discovered that plenty of people are wise to the benefits of curbside check-in. Sure, its relevance has narrowed in recent years as online check-in has become the norm and baggage fees have spurred a shift toward carry-on baggage. But, most airlines still offer it, and demand remains high. In fact, a spokesperson for JetBlue told me that "curbside check-in still remains popular among our customers," especially during summer and holiday periods.

A Southwest spokesperson says that curbside is a popular service and the airline "continually receives positive feedback about this option." Perhaps most tellingly, United mentioned that while curbside check-in has declined with the rise of self-service check-in, it seems to lead to higher satisfaction in post-travel surveys.

I turned to my social networks to see if I could find some curbside loyalists. I didn't have to look far. Turns out those that use it swear by it ... and think of curbside as the airport option that's hidden in plain sight.

Related: How to Check a Bag for Free

Some of the people I spoke with used curbside both to check in and check bags, while others checked in online and simply dropped their bags at the curb before heading into the airport. Everyone cited not having to wait in line more than five minutes (if at all) as the biggest perk. While the lines snaked inside, they could always count on their trusty skycaps to speed them through.

The people who were most enthusiastic about curbside check-in fell roughly into a few categories. There were those traveling with kids (especially small kids) . And there were also those who, for a variety of reasons, were traveling with a lot of stuff. The broadest group was anyone in a hurry—that included the chronically late, frequent travelers trying to minimize transit, and anyone who had battled traffic on the way to the airport. And finally, there were the people with mobility issues, who appreciated that the distance between car and bag drop could be measured in mere feet.

The Pros and Cons of Curbside Check-in

Aside from the time savings, the biggest benefit people cited was the possibility that they could interact with an airline employee in a relatively good mood. Whether it's the fresh air or the possibility of a tip with each interaction, skycaps just seem to be in a better mood than their inside-counter brethren, swore many curbside check-in partisans.

The downside, of course, is cost. Some airlines still offer free curbside check-in, but others charge $2 per bag (that's of course, in addition to the standard baggage fees). And whether you pay or not, tipping is an expected part of the skycap exchange.

Related: 10 Cures for the Chronic Overpacker

Want to Try It?

Here's a breakdown by airline. Note that any costs are in addition to standard baggage fees.

American: American offers curbside check-in at nearly 30 airports. There are a few caveats—a few airports only offer seasonal curbside check-in service, and in Cincinnati you can't use curbside for international travel. There are no additional fees to check baggage curbside, though tipping is encouraged.

Delta: Delta has curbside check-in at around 100 locations. No fee, but "gratuities are always appreciated for outstanding service."

Southwest: Curbside check-in is available at "a majority" of the airports served by Southwest. The airline says that "We do not charge a fee for this service, although gratuities are accepted."

United: Curbside check-in is available on United for no additional cost at approximately 40 airports.

Read the original story: Is Curbside Check-In the Best Thing You're Not Using? by Christine Sarkis on SmarterTravel.