Water is a crucial resource for every country. Some have too much of it, but in the Middle East -- and especially in Israel -- the natural supply is limited and dwindling.

Earlier this year I showed how water shortage damaged the eco-system of the Jordan Valley and the Dead Sea. Since then, I have continued to investigate the Middle East water problems and solutions. The post below is about desalination of Mediterranean Sea water, which has been labeled as Israel's long awaited answer to the water shortage.

"Israel Is Drying Up" is the title of an extensive advertising campaign -- sponsored by the Israeli Water Authority -- which calls for Israelis to minimize their water use as much as possible.

In a commercial currently running on Israeli TV, dancer/actress Renna Raz explains viewers they must continue saving water for just three more years. According to the campaign, in 2013 -- when Israel's newly built desalination plants reach full production -- the public will not need to save on water anymore. Computer graphics make Raz's face fill up with cracks while she is talking, demonstrating to Israelis how their beautiful country is drying up.

The Israeli government's Environmental Protection Minister Gilad Erdan came out against the Water Authority, claiming that a campaign based on the notion that there is a need to save water for only the next three years is problematic. In an interview for Haaretz, he was quoted saying the campaign:

"...does not lead to any behavioral or cultural change among the general public and in a short time we will resume wasting water and water consumption will increase sharply, as in the past. It is necessary to stick to the principles of water conservation in order to alter Israelis' built-in habits." (Haaretz, July 22, 2010)

Meanwhile, the price of water in Israel has been constantly rising in order to cover the high costs of producing desalinated water.

By 2013, desalination plants will be providing 44% of Israel's water demand. If the Israeli government's plans for expanding the desalination project will be fulfilled, then by 2020 the yearly production will be 750 million cubic meters, which will cover 65% of the water demand.

This video report - which I prepared for VJM - examines the pros and cons of Israel's massive investment in the desalination.

Nitzan Horowitz, a Knesset member from the left wing Merez party, has been fighting for environmental causes for a years, first as a journalist and since 2009 as a politician.

He acknowledges that Israel must invest in desalination, but questions the dosage, suggesting it would be better to desalinate less, and invest more in environmentally friendly solutions for the water shortage.

In an email exchange, Horowitz wrote that the government: 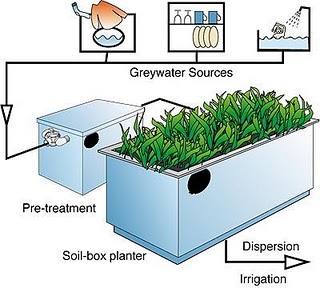 Horowitz's latest proposal bill to the Knesset calls for legalization of treated grey water for domestic use. Grey water is the water drained from domestic activities such as laundry, dish washing, and bathing. In July, the billed was approved in a preliminary reading by the Israeli government. According to Horowitz, reusing grey water can decrease about 40% of water consumption in every home.

Water scientist Sarit Casspi-Oron, of the N.G.O. Israeli Union for Environmental Defense, has also been lobbying for the grey water bill. She claims (Hebrew only) that if only a third of Israel's population will reuse grey water for domestic irrigation and toilet flushing, it will save about fifty million cubic meters of water per year, which is equal to the amount of water created every year in one medium size desalination plant.

The argument against the legalizing of domestic grey water systems is that it would be too difficult to monitor the quality of the reused water, and could lead to gardens and lawns absorbing water that pollutes the land and the air.

Water and Middle East Politics
The fact that water is an important part of the Middle East conflict is well documented (BBC, CNN). The only neighboring country that Israel has managed to cooperate with on water issues is Jordan, when in 1993, as part of the Rabin-Hussein peace agreement, the countries agreed to share the waters of the Jordan River and the Yarmouk River.

Before Israel started desalinating, 60% of its water supply came from two sources which are located on politically conflicted land; Lake Tiberias (also known as the Sea of Galilee) - whose eastern coastline is claimed by Syria, and the West Bank Mountain Aquifer - which lies beneath what is now Palestinian territory. Israel has been maintaining full control of these two natural water sources since 1967. The Syrians do not get any of the water in Lake Tiberias, while the Palestinians are allowed to drill limited amounts from the West Bank Aquifer. 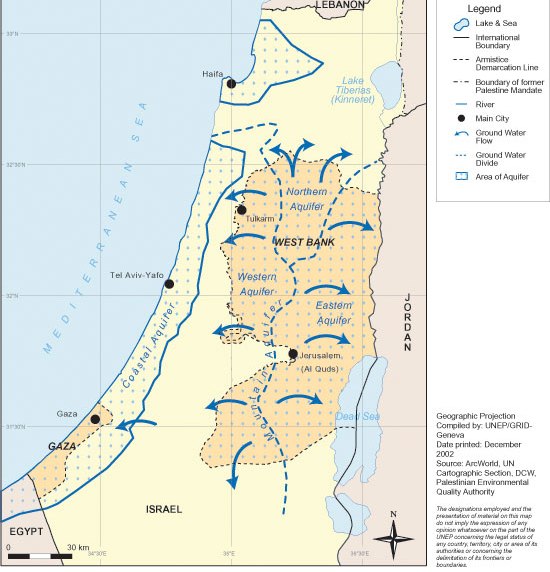 The desalination plants are supposed to ensure Israel with a satisfying water supply from sources within its internationally recognized borders. When the plants reach maximum production, Lake Tiberias and the West Bank Aquifer won't be as crucial to Israel's survival as they are now. Maybe then, Israel will be more inclined to end its occupation of the territories claimed by Syria and by the Palestinians. Maybe not. What is clear is that in the Middle East there will not be peace before everyone has enough water.