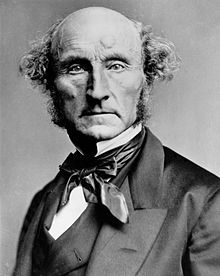 Is Donald Trump a utilitarian, a consequentialist or an objectivist and follower of Ayn Rand who trumpeted a belief in individualism, willpower and self-interest? On the spectrum of amoral philosophical systems, objectivism is obviously the most extreme. Utilitarian thinking was developed by the 19th century philosophers Jeremy Bentham and John Stuart Mill and the idea is basically that usefulness or goodness is defined by the amount of pleasure produced by an action less the displeasure derived from effecting it. Consequentialism is a slighter broader view emphasizing product over process and looking at the value of all action in terms of what results from it, rather than its morality. There have been attempts to unite the utilitarian idea with the notion of goodness, particularly by the English philosopher Derek Parfitt (On What Matters) but generally the notions of morality and efficacity don't go hand in hand. Mr. Trump's plans and promises have been criticized for being sketchy, but the little we know indicates that he's a candidate who's result orientated, often to the detriment of what Kant termed categorical imperatives. For instance, his plan to stop Muslims from coming into the country is discriminatory. Why not stop all Hindus from coming into the States because of extremist elements who have committed violent acts, the same with right wing Jews and Buddhist sects in Myanmar who have committed violent acts against Muslims? Who says these folks don't have their own form of millenarianism which could be a danger to the American people? You get things done, but at what cost? Americans have inalienable rights. Will these be trampled in the name of expedience? Will the essence of democracy be lost? However, while Trump may seem to be a utilitarian or consequentialist due to his emphasis on self-interest, his plans are too murky and general to enable the kind of due diligence a true utilitarian or even consequentialist might require and even though Trump's bottom line oriented he doesn't seem to think about the consequences of his actions even when he's simply giving a speech. However, objectivism which depends more on the almost transcendent vision of the individual easily fits the bill. Yes, if Ayn Rand were alive Donald Trump might be the model for a book like Atlas Shrugged or The Fountainhead.

{This as originally posted to The Screaming Pope, Francis Levy's blog of rants and reactions to contemporary politics, art and culture}