"A lot of people will pay to see someone shut your mouth. So keep on bragging, keep on sassing and always be outrageous." - Gorgeous George 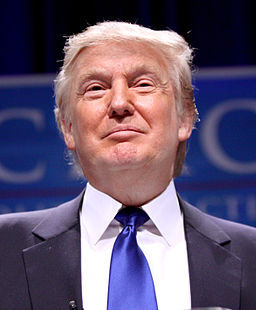 I don't want to start rumors, but Gorgeous George the wrestler was thirty-one years old, and already famous, when Donald Trump was born in the borough of Queens, New York City, 1946. Now, I don't know if it was possible, but with all that travel George did, could he have had a liaison with Donald's mom? I'm not saying it's true or not, but I was raised in Queens as well, not that long afterward, and I know for a fact there was plenty of adultery and illicit affairs. So go put two and two together, if you know what I mean.

And even if he wasn't, Donald sure acts like he sat at his papa's knee and learned all his tricks. You see, Gorgeous George was responsible for making professional wrestling what it is today, a sports entertainment extravaganza. He is credited with helping professional wrestling leap from local circus and carnival acts straight into national television. And he did it in the most unconventional way possible, by bringing to the macho stoic circus of male athleticism an undeniably effeminate and narcissistic panache.

He came into the ring with expensive robes and a valet. He sprayed Chanel No. 5 (although he called it No. 10 to indicate double strength) to disinfect the ring and chided his fellow wrestlers as unworthy and dumb. Most imaginatively, he understood that the typical role of heel in wrestling, the bad guy who gets his comeuppance from the hero or face, could be turned inside out; the loud mouth becoming the main attraction. When he said "so keep on bragging, keep on sassing and always be outrageous," he wasn't just blowing smoke. He was giving advice to a 19-year-old Muhammad Ali, who took it seriously and replicated George's act with Sonny Liston. Although not particularly athletic, the most notable physical trait about George was his hair, which he grew out long, dyed platinum blonde and put in gold-plated bobby pins.

In professional wrestling, everything is scripted and organized to attract attention. The book schedules events and comes up with angles, which is wrestling talk for a storyline that will grab attention. Usually this involves one wrestler attacking another physically or verbally which results in a revenge match. Everything is scripted, even the staged rivalry among multiple wrestlers complete with overlapping storylines and historical feuds woven in. "You can see blood coming out of their eyes, coming out of wherever" could have been the tag line for a Madison Garden A-show, the wrestling term for a card featuring wrestling fan's biggest draws. In my childhood that would have been Killer Kowalski, Gorilla Monsoon, Bobo Brazil, and Bruno Sammartino, not Ted Cruz, Chris Christie, Marco Rubio and Bush. But times have changed.

What Gorgeous George did for wrestling, Donald Trump has done for politics. He has completed the transition from a fairly predictable set of political hand holds, boilerplate slogans, and caricatures of liberal or conservative philosophies, and injected into the political ring a no holds barred form of political entertainment extravaganza. Fox News had 24 million viewers for its first Republican debate and, as the Los Angeles Times pointed out, that was 500,000 more than watched Game 7 of the World Series. How is that for political entertainment, drawing in both fans and detractors wanting to hoot, holler and have a good time.

And give this son of George credit. When he feints and jabs, winking and smiling, he knows he is talking directly to his fan base and over the heads of the stuffy pundits and journalists who, like the slow moving ref in the ring, are simply outmatched. "Get your filthy hands off me!" George once admonished a judge who had dared pull back his robe to check for foreign objects. And how dare journalists attack Donald Trump, who really wants to get along with everyone, even Roger Ailes, the head of Fox News who negotiated a truce after Trump threatened to boycott Fox regarding his treatment by a Fox correspondent and news anchor.

And what about dealing with our foes? When Donald Trump says he will put a ring around the Islamic State, he's not talking traditional marriage. No way, he will poke his opponent right in the eye: "We go in, knock the hell out of 'em, we take the oil." What to do about the leaders of Mexico handpicking their criminals and rapists and sending them our way? Build a wall and make Mexico pay for it. Knee to the groin, brilliant!

And don't ever let those pesky journalists corner you. As reported in the New York Times, Trump answered, after repeated questions from journalists about his specifics for fixing the economy and foreign policy: "I think you're going to see lots of plans." What could be more concise or clear.

Of course, Donald's main gift is his ability to get into feuds with politicians and celebrities. When asked about the war hero, Senator John McCain, Trump questioned his hero status. "He's not a war hero. He's a war hero because he was captured. I like people that weren't captured, OK." When later asked about his own military status, Trump offered that he was given a discharge for a problem with one of his feet, but he couldn't recall which one.

Well, I hate to tell you but that whole sequence is quite clever. Like his father, perhaps not his father, but similar, Trump follows in the glorious footsteps of Gorgeous George who got away with being the first cowardly villain that achieved heroic status. Yet, Donald Trump is not simply an entertainer; he's a viable candidate for the United States presidency. What might this tell us about the collective, you know -- us?