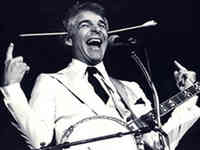 I don't mean to insult the comedian/actor/author/musician Steve Martin, whose mega-talents I admire, but I can imagine Donald Trump echoing one of Martin's favorite lines from his old comedy routine: "I can't believe I get paid for doing this."

Well, Trump doesn't exactly get paid money to campaign for president, but he gets paid in his own currency, which is publicity and ego-boosting. And for what?

Andy Kroll seeks to explain Trump -- or the Trump phenomenon -- in his insightful article, "Trumping," in the August 1 issue of the National Journal. It is one of the best things that has been been written about The Donald.

Kroll was assigned to do a story focusing on Trump's policy ideas and came back empty-handed, because Trump wouldn't talk with him. Kroll talked to some Trump insiders to get a glimpse of what Trump might do as president, but his conclusion from those conversations was that he has no policy ideas. His campaign is all about power and ego.

Like the rest of the press corps, Kroll followed Trump to Laredo, Texas, on the U.S.-Mexico border, where reporters expected him to say something interesting about his plans to stop illegal immigration. Trump did hold a press conference, but he said absolutely nothing newsworthy. But the reporters were getting paid to write stories, so they filed dispatches as if Trump had done or said something meaningful. Kroll lists some of the headlines in the next day's papers: "Donald Trump, at Mexican Border, Claims Close Ties to Hispanics" (New York Times); "At Texas-Mexico border, Donald Trump cites 'great danger' from immigrants." (Los Angeles Times); and "Trump does Texas: At border, he blasts naysayers, predicts victory" (Dallas Morning News). As Kroll noted: "The campaign could hardly have written them better itself."

So instead of writing about Trump's ideas, Kroll wrote an article about how the media gives Trump exactly what he wants -- attention -- even though he says nothing substantive. Kroll observed that reporters and editors are stuck in the herd psychology of covering Trump like he's a serious candidate, when what he really is -- my words, not Kroll's -- is a celebrity candidate, the way that Kim Kardashian is a celebrity on TV. She has no talent and nothing to say, but she's famous for being famous.

That phrase was first coined by historian Daniel Boorstin in his 1961 book, The Image: A Guide to Pseudo-events in America. In his book, he defined a celebrity as "a person who is known for his well-knownness". That eventually morphed into "famous for being famous."

In a 2001 essay, "Toward a New Definition of Celebrity," the historian and culture critic Neal Gabler applied Boorstin's idea to Zsa Zsa Gabor, who used her social ties (she was married nine times, including to actor George Sanders and hotel magnate Conrad Hilton) to get herself a number of bit parts in some really lousy movies and TV sit-coms in the 1950s and 1960s, despite having no acting talent. Despite (or perhaps because of -- who knows?) her lack of talent, Gabor wound up being a frequent guest on late night talk shows and game shows. She didn't get on TV to promote her movies, which were mostly duds. She talked about herself, especially her views about men and relationships, typically resorting to innuendo. Although she rarely had anything interesting to say, apparently many folks thought she was glamorous. She, however, did have an appealing instinct for self-mockery. She knew better than anyone that she was mostly a celebrity, famous for being famous. Gabler even dubbed this phenomenon the "Zsa Zsa Factor."

Can it just be a coincidence that Gabor, a native of Hungary, married hotel magnate Conrad Hilton and that Trump's first wife, Ivana, is from the Czech Republic and that his third wife, Melania, is a native of Slovenia? Is it unreasonable to think that if Trump (who was born in 1946) were 20 or 30 years older, he might have married Gabor (born in 1917) and become one her many husbands? They would have truly been a celebrity couple.

Trump inherited his father's real estate fortune and -- let's give him some credit here -- expanded it into the Trump empire. But while relatively few Americans actually spend time in Trump's hotels, casinos, or apartment buildings, he is better known than most corporate CEOs because he created a Trump brand -- with himself as the brand's face. To enhance the brand, he wrote (actually, had ghost-written for him) some self-flattering books, hosted a TV show (where his catch phrase was "you're fired"), and kept his name, face, and hair in the public eye.

But because The Trump Organization is a privately held company, it is hard to know just how good a businessman he really is. At the first GOP debate in Cleveland, Chris Wallace asked Trump about four of his casinos and hotels that declared bankruptcy. Trump didn't deny it, he simply said that he had "taken advantage of the laws of this country, like other people." Then he boasted, "I built a net worth of more than $10 billion." But Forbes magazine -- which describes Trump as "entrepreneur, personality" -- says it is really $4 billion.

As a businessman, Trump trades in money, and he's done OK for himself. But politicians are supposed to trade in ideas, and Trump has no ideas. Actually, Trump has plenty of ideas -- Mexican immigrants are rapists, women are bimbos, and "I am very smart." But he has no ideas about public policy. Realizing this, Kroll treated Trump as a symptom of a political disease rather than as a serious candidate. And rightly so.

Yes, Trump is currently leading the GOP pack, but that's meaningless at this point with 17 candidates in the race. As I predicted in an article a few weeks ago, Trump has probably peaked in terms of his support among GOP primary voters. He might even win a few primaries. But as soon as the GOP ranks get thinner and he's competing against just Bush, Kasich, Walker, and Rubio, he'll crash. Then he'll abandon the GOP ship, run as a third party independent, and take enough votes away from the Republican candidate to help put a Democrat in the White House.

So in covering Trump as a media-induced celebrity rather than a serious candidate, Kroll had the right idea. But of course the irony is that the National Journal made Kroll's article its cover story, complete with a huge cartoon of Trump's face (hovering over the White House) on the cover. Just what Trump wanted.

As Steve Martin might say, Trump is one wild and crazy guy.