Sometimes you find yourself in exactly the right place at the right time, even when it seems events have conspired to thwart desire.

For months, I had planned a camping trip to the far western regions of the Great Plains. Spring offered the opportunity for spiritual renewal at the Native American sacred sites of Wyoming's Devils Tower and South Dakota's Wind Cave. I was completely dismayed and frustrated to learn that while I was a day's drive from Minnesota, 5,000 people would be gathering in Minneapolis/St. Paul to protest the Tar Sands pipeline expansions through the upper Midwest.

Coincidentally, the decision of the Minnesota Public Utilities Commission to grant a certificate of need to the Enbridge Corporation for the controversial Sandpiper Pipeline, which would carry Bakken oil crude, was also on the minds of the rally organizers and participants. All that remains is the decision on routing, but opponents say there is no upside to a pipeline that threatens Native Treaty lands and the health and welfare of all Minnesotans. 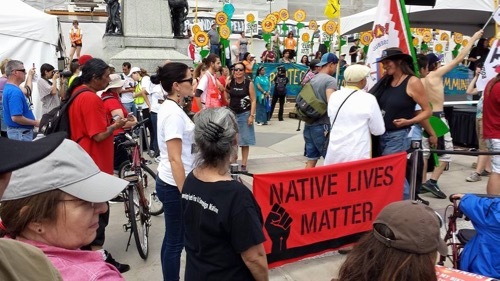 This week, the Mille Lacs and White Earth Ojibwe communities held hearings against Sandpiper. They had been completely shut out of the decision-making process. Among other threats, the pipeline will potentially desecrate wild rice beds essential to the tribes' identity.

I had been writing about this struggle for years, and as I read about what was happening back home in Minnesota, it felt like I was an eternity removed from a critical juncture in the struggle experienced by my Native neighbors.

Sometimes frustration requires that you figure out where you are in the moment, and the answer to my unhappy moment came in a quote.

"It affects us psychologically and spiritually... when people climb on this sacred butte and hammer metal objects into it, the butte is defiled and our worship is intruded upon. It is like they pounded something into our bodies." 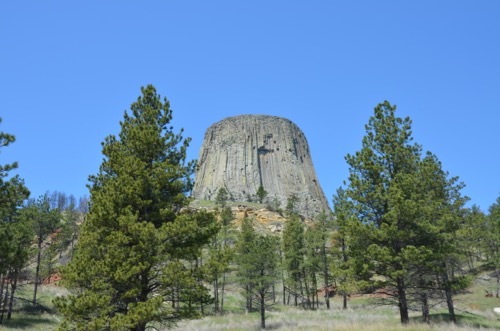 Arvol Looking Horse's words are prominently displayed at the Devils Tower National Monument visitor center. The National Park Service suggests, but it is not mandatory, that climbers respect Native spirituality and refrain from climbing on the Tower during June, which is a ceremonial time. Looking Horse is the spiritual leader among the Lakota, Dakota and Nakota People. The Lakota traditionally held their Sun Dance at Devils Tower around the summer solstice. Bear Lodge, the Lakota name for the Tower, is considered a place of renewal.

Unfortunately, recreational climbers are also attracted to the hundreds of hexagonal columns, at least one extending 400 feet, which make Devils Tower one of the premiere climbing destinations in North America. This voluntary climbing closure is an attempt to encourage understanding and respect for indigenous cultures.

Of course this does not happen.

So, there I was at Devils Tower during the first week in June, and climbers were visible on the rock face and walking the paths. Carabiners rattled and clinked against harnesses, while ropes seemed to morph into imaginary snakes as the climbers strutted along the paths. I am not Native, but I learn from the culture. To anyone seeking spiritual renewal at Devils Tower, the crass arrogance of the climbers felt like an assault. It might be legal to climb, but where is the moral compass of individuals who voluntarily choose to desecrate a sacred site?

I was offered a spiritual comparison, and I could be a witness. Maybe it was not necessary to be in Minnesota. Desecration of sacred lands is happening on both sides of the Great Plains.

Like climbing, it may be legal for Enbridge Corporation to move forward with a pipeline through native treaty lands, but is it moral? Is it moral for the Twin Cities NBC affiliate, KARE-11 News, to air a commercial from Enbridge on the Saturday evening broadcast that covered the march of 5,000 against the pipeline?

Enbridge was given the opportunity to promote what was essentially a paid rebuttal to the message of the anti-pipeline organizers.

In a prepared statement, Honor the Earth's Winona LaDuke, former Vice-Presidential candidate and resident of Minnesota's White Earth Reservation, had this to say about moral resolve.

This is going to be a very hard battle against Enbridge and to protect our lakes. I am asking all of you to help us with action -- prayers -- and (with) words (to) draw attention to our issue with public officials and your neighbors. The Minnesota PUC is not likely to think or act wisely, so we are going to have to rely on our tribal leadership, our people and our resilience to fight back big oil. There is a lot of talk about how the pipelines will stop the bomb trains. And what we all know is that we have to stop all of this.

The Lakota have centuries of oral history, and a creation story that has survived. Oral tradition offers meaning and a preternatural prediction of what would happen to the people of the spirit world when they ventured through the opening of Wind Cave into what promised to be a good life on earth.

Inktomi, the Trickster, traveled beneath the earth in the form of a wolf and convinced the people to follow him to the surface. The majority stayed behind, because this was against the wishes of the Creator, who wanted to prepare the people for life on earth. It was not yet time.

When this first group arrives, it becomes obvious that Inktomi has tricked them. They cannot return to Wind Cave, there is no food, and they starve.

The group that remained was blessed by Creator and finally led to the surface, but to this day suffer because of the antics of Inktomi.

When we turned out the lights in Wind Cave and experienced total darkness and silence, it was easy to imagine the people being led through this impossible labyrinth by a trusted leader who was in harmony with Creator.

We all must find our moral compass and leaders to guide us through the treachery and trickery of this world.

Enbridge Corporation is offering a treaty to the people of Minnesota. Like Inktomi, Enbridge offers promises of riches and an easy life. Is this yet another offering from the Trickster?

Note: Devils Tower was misnamed and misspelled by whites. The Native name is Mato Tipila, meaning Bear Lodge, and an interpreter for an early government mapper made a mistake and translated it as "Bad God's Tower."