When the Supreme Court ruled in favor of same-sex marriage a few months ago, my Facebook feed was awash with rainbow-tinted profile pictures. If you analyzed my friends' posts, you'd conclude that a perfect 100 percent of them supported the SCOTUS ruling.

But something's off about that. I grew up in socially-conservative Western Pennsylvania. I had more than a handful of homophobic high school friends. No fewer than five of my family members are evangelical Christians. I even have several friends who used to work for hyper-conservative members of Congress.

Where were these people during the same-sex marriage buzz? Surely they didn't all change their minds simultaneously. They aren't shy about criticizing the president from time to time. Yet, when it came to a razor-thin 5-4 Supreme Court decision or, for that matter, the Confederate flag debate in South Carolina, you could only hear crickets from the Right half of my social network.

But why? It's a hugely-important thing to understand. Policymakers, business leaders, media, and their many consultants "listen" to social media as a harbinger of public opinion. If certain opinions on Facebook are over-represented and others masked, it could have a profound impact on the social and political landscape.

Let's see what the numbers tell us.

THE STATISTICAL TRUTHS ABOUT FACEBOOK
According to CivicScience, approximately 74 percent of online US adults are on Facebook. 57 percent use the site or mobile app daily. These numbers are consistent with Pew Foundation data published last year, which also found that over half of Americans age 65 and older are on the platform. It's no longer enough to say that Facebook is more liberal simply because its user base is young. There's much more to it.
Here are three things we learned from a deeper dive:

Our research says that 78 percent of self-identified Liberals are on Facebook and 51 percent use the site/app daily. Only 58 percent of Conservatives are Facebook users; 36 percent daily. Moderates split those percentages down the middle. 66 percent have a Facebook account and 40 percent use it daily.

The catch, however, is that there are far more Conservatives than Liberals in the U.S. A recent Gallup survey found that 38 percent of Americans identify as Conservative, versus 24 percent Liberal and 34 percent Moderate. When you factor in the usage rates above, the number of Liberals, Conservatives, or Moderates on Facebook is nearly equal - with Conservatives actually holding a slight edge.

So then why, if there are a comparable number of Conservatives and Liberals on Facebook, might we see a disproportionate amount of left-leaning banter?

#2- Liberals are far more likely than Conservatives to post comments about controversial topics on social media.

When asked whether they post comments on social media about "controversial topics," Liberals were more than twice as likely as Conservatives and 4.5X as likely as Moderates to answer "Yes." Take a look: 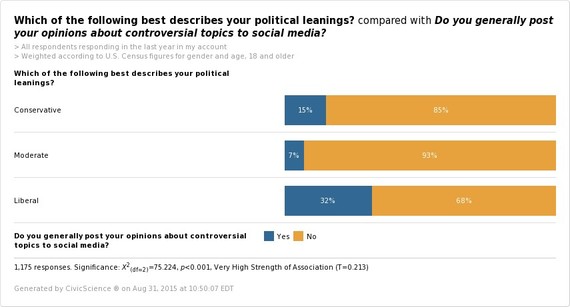 Funny story: One day, I posted a Facebook update, explaining the premise of this article and asking "my ideologically-conservative friends" if and why they choose not to comment on political topics. I urged people to reply "VIA DIRECT MESSAGE" to avoid a nasty debate in the comments. Still, two people posted their opinions directly in the comments - both of them proud Liberals. Of the direct messages I received, two-thirds were from liberal friends, despite the fact that I only asked Conservatives to reply. A small sample but reinforcing nonetheless.

As a few of my friends pointed out and, as a perusal of my Facebook feed confirmed, there may be exceptions - if only ones that justify the rule. Conservatives aren't shy about posting their criticism of President Obama, which would seem to conflict with the observations above. Why the difference? Perhaps because disliking the President is a popular point of view - his approval rating has not risen above 50 percent for over two years. There's safety in numbers.

My friends also cited seeing frequent right-leaning posts about gun rights. Why? Maybe because it's one of few issues where public opinion has grown more conservative since the advent of social media. 2nd Amendment supporters are vocal and well-organized - they've by no means dwarfed anti-gun sentiment on social media but they've held their own.

So, why does the perceived popularity of an issue matter? I'm glad you asked.

#3- Social media users are reticent to share things that are unpopular among their friends.

Most people curate their persona on social media to control how they are perceived. We've published research about this phenomenon before. People are more likely to brag about eating at a fancy restaurant than at 7-Eleven. We share only our most flattering pictures, unless we want to show how humble and self-effacing we are. Admit it. You do it too.

These social inclinations affect our political discourse as well. If a clear majority of our friends espouse a certain position on a topic like gay marriage and we're afraid, as one of my Conservative friends said, of "a likely vindictive response," might people just choose to stay mum if they disagree? There are reasons we close a curtain behind us in the voting booth on Election Day. On Facebook, that curtain is wide open. In our most recent research, only 41 percent of U.S. adults say they would definitely or probably express an opinion on social media if they knew it conflicted with their friends. 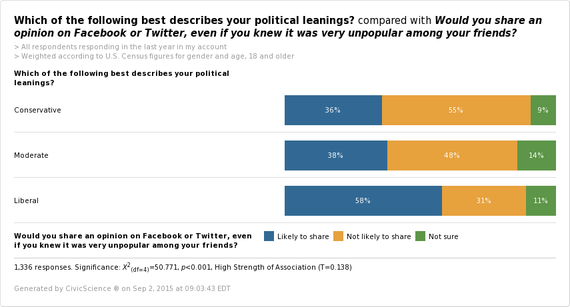 WHY THIS IS A HUGE DEAL
All of this means that the first narrative to take hold on social media can quickly minimize any meaningful level of dissent. It means the fire hose of data streaming from Facebook can be misleadingly lopsided - often to the Left. Just because there is an equal balance of people on the platform does not mean there is a representative balance of expressed opinion. This imbalance could be affecting politics, policy, and commercial decisions in immeasurable ways (which, incidentally, is why discrete opinion research will always have its place in a healthy democracy).

Oh, I hear what you're saying. This is all a bit melodramatic. Most people aren't abruptly changing their positions on issues because of a few comments and shared articles on Facebook, right? That's probably true. Most people are firmly planted in their opinions. But that's not the point.

Ultimately, modern political campaigns focus on a small persuadable group of people in the middle - Moderates, Independents, "Undecideds," or whatever you want to call them. In a general presidential election, it might only be 8-10 percent of the electorate who decide the outcome. And we know that people are more influenced by comments and recommendations on social media than they are by television or other platforms. People trust their friends more than they trust pundits or marketers.

That's why this topic is so important. It could, in fact, turn out to be one of the most dramatic social and political developments in recent American history - with lasting if not permanent implications. In the battle for the hearts and minds of persuadable voters, Facebook is fast becoming the most crucial theater. And, at least right now, the political Left has the advantage.