The conventional wisdom in Washington seems to be that Gen. Stanley McChrystal is too valuable to lose. Even if he's replaced, this is the sobering state of mind among many in our nation's capital. What it says about our overall strategy in Afghanistan is even more frightening. 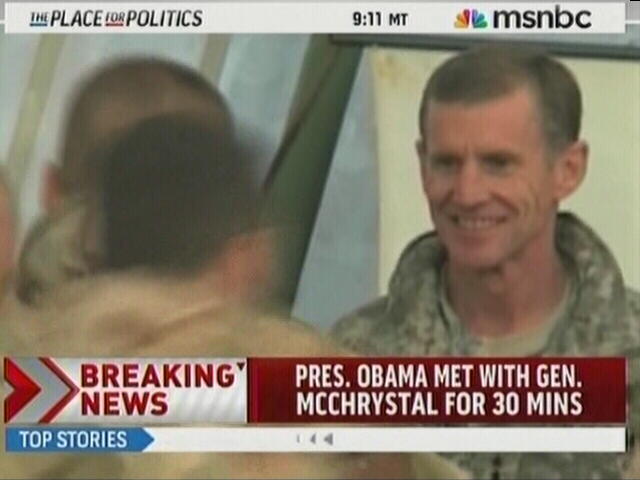 I've supported Pres. Obama's Afghanistan strategy from the start, especially the diplomatic element, which we aren't calling nation building but is exactly that. However, Gen. McChrystal's insubordination, but also the general attitude of his staff reveals troubling signs. They're alarming enough to put my support on permanent pause.

It doesn't change my stance that Gen. McChrystal should be fired.

Sect. of Defense Bob Gates telegraphed McChrystal's possible way through by acknowledging the comments in the Rolling Stone interview were "a significant mistake and exercised poor judgment in this case," with a statement long enough to also emphasize that "our singular focus must be on supporting them and succeeding in Afghanistan without such distractions." Shorter: people are dying; McChrystal leaving has serious ramifications.

That's certainly true, but if you read the RS article carefully, there is a reiteration of the drawback of COIN. Putting soldiers in harm's way and telling them that they must sacrifice to keep civilian casualties down. I'm all for the latter, but not at the expense of the former. I hate to repeat myself, but it's my belief that COIN is one reason our casualties are mounting in Afghanistan. From
Democracy Arsenal on why Obama "HAS to fire McChrystal":

McChrystal's COIN Blinders: This is the part of the story that will likely get the least attention - but it should get the most. In a session with enlisted men complaining about McChrystal's overly restrictive rules of engagement that prevent them from using lethal force and put American troops in harm's way from insurgents, McChrystal trots out the old hearts and minds cliche and makes the historically irrelevant point that the Soviets killed one million Afghans and "that didn't work" (as if it was that simple). He is also quoted as saying, "This is the philosophical part that works with think tanks . . but it doesn't get the same reception from infantry companies."

Les Gelb goes on quite an appalling anti-Democratic rant It boils down to an old 20th century, pre-Iraq war talking point: The U.S. military, officers and enlisted ranks don't like and don't trust Democrats and liberals. Not particularly helpful. Then Gelb finally gets to his bottom line: I don't want to see another change of command in Afghanistan.

What Mr. Gelb says is what many in Washington are feeling, too.

The reality is even worse.

Laura Rozen has a quote from another Washingtonian, Sen. Carl Levin: "However, it is very significant that, while the reported comments reflect personality differences, they do not reflect differences in policy on prosecuting the war."

Pres. Obama has doubled down on the COIN strategy in Afghanistan, with no one else perceived to be able to execute the strategy that Gen. McChrystal designed. It's called job security, but it puts U.S. foreign policy in a real straight jacket. The conflict is that COIN is not only nation building on steroids, but it will drain our resources for 15-20 years to come.

The simple fact is that Gen. Stanley McChrystal, while being a remarkable soldier, also knows where he stands in the war footing food chain. It's been illustrated by his continual acting out, showing his displeasure with the Afghanistan efforts going back months. Long ago he said on the record and in public that he didn't believe V.P. Biden's counterinsurgency plan would work. McChrystal has been allowed to go off the reservation for months and months.

Powerful people in Obama's cabinet have his back. It is my assessment that V.P. Joe Biden is one of them. I have no special knowledge, but I believe Sect. Clinton is as well. As an aside, it didn't go unnoticed that both she and SecDef Gates are left untouched in McChrystal's torching of the diplomatic team working so hard.

The powers in Washington know full well how bad it is in Afghanistan right now.

One interesting and overlooked nugget in the Rolling Stone piece is that the person rising in all of this is V.P. Joe Biden.

Even proponents of counterinsurgency are hard-pressed to explain the new plan. "This isn't a classic operation," says a U.S. military official. "It's not going to be Black Hawk Down. There aren't going to be doors kicked in." Other U.S. officials insist that doors are going to be kicked in, but that it's going to be a kinder, gentler offensive than the disaster in Marja. "The Taliban have a jackboot on the city," says a military official. "We have to remove them, but we have to do it in a way that doesn't alienate the population." When Vice President Biden was briefed on the new plan in the Oval Office, insiders say he was shocked to see how much it mirrored the more gradual plan of counterterrorism that he advocated last fall. "This looks like CT-plus!" he said, according to U.S. officials familiar with the meeting.

The frightening aspect about Pres. Obama possibly retaining Gen. McChrystal is what it says about our Afghanistan strategy. If McChrystal stays it means that Obama, his national security team and the greater foreign policy world in Washington believe this one general is the only person who can execute COIN in Afghanistan successfully. I've been told innumerable times since this story broke that only McChrystal can do it, and that he also gets the politics of Afghanistan, though the Rolling Stone article proves he doesn't get it over here, or simply doesn't feel the need to care.

The whole notion that one general is irreplaceable is alarming. We're way beyond MacArthur territory on this one.

Taylor Marsh is a political analyst and writer out of Washington, D.C.