There was a famous study in the sixties by Robert Rosenthal and Lenore Jacobson, known in most circles as The Pygmalion Effect. Certain students with normal IQs were identified to teachers as having higher-than-normal IQs - referred to as "spurters" - and could be expected to do better that year than their peers.

Not only did the mean IQ of the entire group improve at the end of the year, but the students identified as "spurters" showed statistically significant gains. In other words, children rise to the expectations we set for them. 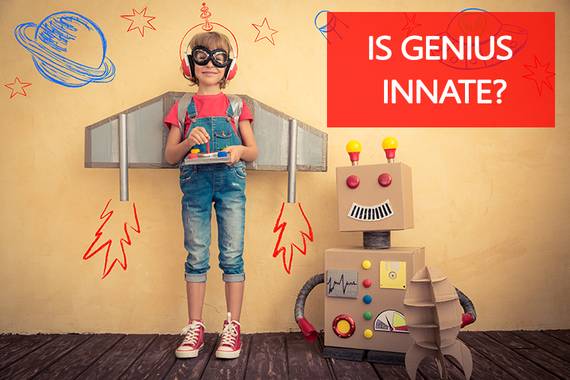 A belief that "I am not good at math" is self-propagating. A not-good-at-math person assumes his math incompetencies limit his ability to succeed in math, thereby avoiding opportunities to learn math and improve his math skills, further eroding his math skills.

The belief that you are not a "math person" is a greater determinant of mathematics competence than some innate gift, or lack thereof.

And it's an issue somewhat unique to our American individualistic ideals. Noted Stanford psychologist Carol Dweck, the guru of the "Growth Mindset," has devoted the bulk of her career researching, writing and lecturing on how to develop a "Growth Mindset," the belief that intelligence is acquired, not something you're born with.

In the 2007 Stanford Alumni magazine article "Effort Effect," Dweck explains how other cultures do not luxuriate in the limiting beliefs of fixed mindsets. A college physics teacher wrote to her explaining that, where she was educated in India, "there was no notion that you had to be a genius or even particularly smart to learn physics. 'The assumption was that everyone could do it, and, for the most part, they did'."

And look where it's gotten us. The 2013 Skills Outlook Survey published by the Organization for Economic Co-operation and Development (OECD), places young Americans dead last, out of 24 advanced countries, in numeracy and problem-solving skills. Even among Americans who have graduate degrees, Americans performed far worse than their counterparts. Poorer countries recognize math as difficult, just as Americans do, but simultaneously see math as the key to economic advancement. Rather than chalking it up to "I'm just not good at math," these poorer countries add more courses to the curriculum to move their children to proficiency.

While this is all somewhat convincing, we know from first-hand experience that intelligence is also something you're born with. We have all met certain precocious children that learn tremendously quickly, read from an early age, and display advanced vocabulary. We have seen, or at least heard of, music prodigies, math prodigies, artistic prodigies.

What we rarely see, however, are the hours and years of work involved in educating a child with a "gift." Olympic gymnasts, concert pianists, ball players, chess champions have put in countless hours of dedicated training and practice to get where they are. "Gifts" alone only go so far.

"I've always hated the word prodigy," says chess prodigy Josh Waitzin, author of The Art of Learning. "I think it's dehumanizing. I think that when you're labeled 'genius, prodigy, wunderkind,' it denies the human struggle against adversity which is at the center of my relationship to success. I think that anybody can become tremendously successful at what they do as long as they approach the learning processing a way that isn't self-paralyzing."

This is all the more true in scientific research. "It is always piecewise knowledge, hard-won, and you don't see the totality until a couple of years later," describes Roald Hoffman, recipient of the 1981 Nobel Prize in chemistry, "but the process is interesting. There are often not single 'Aha!' or 'Eureka!' moments. There are little pieces of understanding that slowly fall into place."