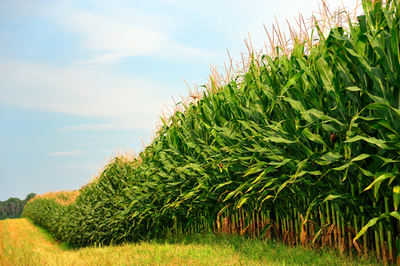 Many consumers purchase organic food and textiles to avoid unwanted toxins that may be present from the industrial chemical complex that pervades modern agriculture. Others who are wary of GMO technology purchase organic because GMO's are prohibited in organic production. Because GMO's are living reproductive plants that are wont to spread their pollen hither and yon, those modified genes are often cast across furrow and valley. No longer contained in the lab, these mutant genes are difficult to stop. Just how much of our organic supply is contaminated? There is one state organic program bent to find out!

It's a fact that California leads the way in organic sales and acreage. The California Department of Agriculture (CDFA) values those producers who make up such a vibrant expanding sector of ag-economy in the state. The CDFA has a State Organic Program (SOP) whose work it is to insure the integrity of the organic label in California. They work through the state's network of county agricultural commissioners to verify organic certifications, sample organic produce for pesticide residue testing, and perform a multitude of other activities that support organic growers and their blossoming market.

Now they will undertake a new, more complex and controversial task: To test California organic product for genetic contamination of GMO materials.

The California SOP takes recommendations from an advisory committee (much like a mini NOSB) called the California Organic Products Advisory Committee (COPAC). I have held a seat on this committee since 2008 occasionally serving as Chairwoman and always acting as yeomen. It was over a year ago whilst reviewing residue samplings that one of our more inquisitive and feisty committee members bought up the idea of including GMO sampling as part of the program's testing protocol. One significant COPAC member and esteemed walnut grower, Jenny Lester Moffitt, went on to become the CDFA Deputy Secretary of Agriculture. The idea took root and she along with a special panel of experts and COPAC members designed a plan to begin the first-ever GMO pilot testing protocol for organic products.

You may say that this could be organic's dirty little secret, but it has to be known what is contaminated and by how much. Back in 2014, Miles McEvoy, Deputy Secretary of the National Organic Program announced new residue texting protocol and included GMO testing as part of the regime. What he failed to elucidate on was tolerance levels or thresholds of contamination.

The EU Organic regulations and the Non-GMO Project both test and have set a threshold at .9 percent GMO presence. This may seem mighty high and drives home how pervasive this genetic pollution has become. When a gene is manipulated and its traits instigated, it seeks to do what every living entity itches to do - breed. Once the genes are out of the bag, or in this case out of the lab, they do not halt at organic fields and hollows. They march like a battalion, spreading their foreign progeny across vast plains of genetic societies. This foreign invasion leaves behind a permanent GMO legacy which can never be recalled. Some of our seeds are contaminated forever. But I digress...

Since the CA SOP already tests for pesticide residues, this pilot project will follow similar protocols, except that the GMO samples collected and tested during the pilot project will be "blind." That is, the results will be collected in aggregate form to show us whether and how much GMO material is present in our crops overall, without identifying individual farms or farmers. That's because the goal of the project is simply to gain a basic understanding of the presence and extent of any GMOs in the state's organic crops. We need to find out where we are in the landscape of this insidious contamination before we set limits or tolerances. Not to mention, who pays and is responsible for the genetic invasion?

It's a sad but true fact that our genetic world is radically different than it was just a few decades ago. As USDA and APHIS approve an ever-expanding array of new genetic entities for agricultural use, our once natural, pristine gene pool is being forever altered.

Serving as the omphalos (or center) of this pilot are alfalfa, canola, corn, soy, zucchini and summer squash, cattle feed, and seeds/seed crops - the most at risk crops will be tested. We can look for the final report on their findings sometime at the end of 2016. These results will serve as a mechanism to determine next steps for COPAC and the California SOP as well as the NOP.

You don't know what you don't know until you uncover it. That's just what the California's State Organic Program aims to do for organic and GMO contamination. Stay tuned.