Tom Mangelsen savors the quiet fall. The renowned Jackson Hole wildlife photographer, who has traveled to every continent in search of remarkable animal imagery, considers the autumn mating ritual of North American elk to be among the greatest spectacles of nature.

Nowhere else is the scene more dramatic, Mangelsen says, than in his own backyard of Grand Teton National Park. He interacts with thousands of park visitors annually, and, he says, most are under the false impression that wapiti are protected.

Indeed, for most of the year, Grand Teton rangers, like their counterparts in Yellowstone, aggressively warn tourists to refrain from doing anything that might cause duress to animals or disrupt wildlife behavior.

Violate the regulations by getting too close or feeding the wild inhabitants and one can be punished with a hefty fine. Do something truly egregious, such as harming or harassing a creature, and a visitor could be banished from the park.

However, it's all part of a strange illusion -- a web of extraordinary contradictions -- that shape wildlife management in Jackson Hole, Wyoming. 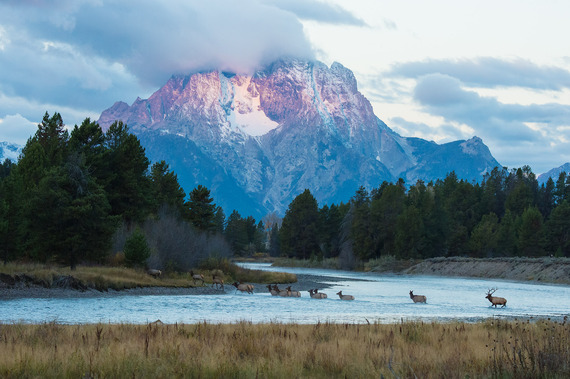 (Above: Elk crossing the Snake River in Grand Teton National Park at first light. Photo by Thomas D. Mangelsen, with permission of the photographer.)

Few spots rival it in the Lower 48 for the diversity of fauna readily seen. The corridor is an anchor to Jackson Hole's growing multi-million dollar, non-consumptive ecotourism economy.

Three groups of elk, in succession, passed blithely across the Snake, sending camera motor drives aflutter. The hooved bands headed eastward over the asphalt highway and then disappeared out of sight.

That's when Mangelsen heard the reverb of rifle fire on the first evening of Grand Teton's annual "elk reduction program," also known as the park hunt.

"Once the hunters arrive in the park and the bullets start flying, it's time to put the cameras away because the elk get justifiably skittish. Their behavior changes," Mangelsen says. "They know they're running for their lives."

While the park elk hunt was codified in Grand Teton's 1950 enabling federal legislation that created the current park boundaries, many see it as an anachronism grossly out of step with shifting societal values in the modern world.

Elk vigorously safeguarded against human impacts inside the boundaries of an iconic nature preserve on one day are suddenly subjected to intrusive stalking and killing by hunters the next.

Besides their anger over animals being hunted in a national park, local photographers Tim Mayo and Kent Nelson say the hunt drives hikers and other recreationists out of Grand Teton in October, represents a public safety hazard, results in resource damage from sportsmen behaving stupidly and creates grave dangers for species like grizzly bears that are attracted to the carcasses.

These contradictions prompted Mayo and Nelson, under the banner of their group, Wyoming Wildlife Advocates, to file a lawsuit this week seeking to get the hunt halted. In most national parks, hunting is prohibited.

The legal action may not succeed but it raises important questions that state and federal officials have refused to meet head on, preferring to hide behind the excuse that the hunt is an old West tradition -- even when it flies in the face of logic.

Mayo and Nelson say it's absurd that millions of tax dollars are spent to artificially feed thousands of elk on the National Elk Refuge in Jackson Hole -- based on the rationale that it's necessary to prop up herd numbers. Meanwhile, just across the adjacent invisible park boundary, Grand Teton officials carry out an "elk reduction," claiming there are too many. Which is it?

The Elk Refuge feeding program has made it a notorious reservoir for spreading the bovine disease, brucellosis, in elk and a potential hotspot for much-feared chronic wasting disease, the Mad Cow equivalent that strikes members of the deer family. Local hunting guides and outfitters fiercely defend the park hunt and an expensive wildlife feeding program at the Elk Refuge and 22 other state-run facilities because they earn their livings selling hunts of public elk.

Further complicating the picture is the admission that Grand Teton's elk hunt will likely result in hunter-caused grizzly bear deaths inside the park. The state of Wyoming also allows gray wolves to be killed within close proximity to Grand Teton even though lobos are a natural tool to keep elk numbers in check and help stop the spread of wildlife diseases because they prey upon sick animals. Viewing wolves as competitors, most local hunting guides and outfitters have never accepted the restoration of wolves in the state.

The Elk Refuge is managed by the US Fish and Wildlife Service, Grand Teton by the National Park Service. Both are sister agencies within the US Interior Department.

While Interior Secretary Sally Jewell has spoken often about being committed to ecosystem health and sound wildlife management, the arguments advanced by Mayo and Nelson expose hypocrisy, critics of the hunt say.

Addressing it takes courage, but many wonder: Does Secretary Jewell have it in her?

Todd Wilkinson has been writing about the environment for nearly 30 years and is author of the critically-acclaimed book, Last Stand: Ted Turner's Quest to Save a Troubled Planet just released in paperback. Thomas D. Mangelsen also has a new book of photographs out titled The Last Great Wild Places that features essays by Wilkinson and noted chimpanzee researcher and conservationist Dr. Jane Goodall.