The Wal-Mart/Sam's Club empire made waves this week with the introduction of their new, square milk jug. Designed to improve space efficiency, reduce waste, and cut costs, the new jugs are a boon for sustainability and packaging innovation, but are proving tricky for some customers, who are having trouble pouring the milk without spilling some of it. It begs the question: Is sustainable innovation worth a little spilled milk?

First, what kind of innovation are we talking about here? To begin, anything that a retailer the size of Wal-Mart and/or Sam's Club does is going to have a huge impact across the board, just because of the incredible scale required to get it done; it doesn't even have to be the whole company that does it (so far, Sam's Club is offering case-less milk gallons in 189 clubs. The milk is available in most Sam's Club locations in Alabama, Arkansas, Florida, Georgia, Kentucky, Michigan, Nevada, Ohio, South Carolina and Tennessee). 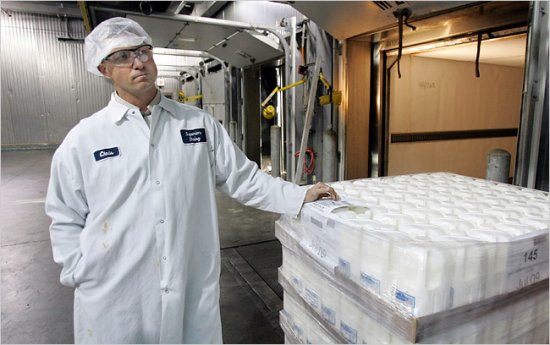 That said, the big story with the new jug is that it requires much less space and is easier to pack. Traditional milk jugs can't be stacked on one another by themselves, so they require milk crates for bulk storage and transport. That means the milk crates, though reusable, use up space on return trips in delivery trucks, and have to be returned somewhere that can use them, and washed before they can help transport milk again; Dan Soehnlen, president of Superior Dairy (which is the company that invented and began using the square jug in 1998), said 100,000 gallons of water a day are used at his dairy alone to keep the crates clean. Using the old jugs and the crates, four to five trips are required each week to deliver milk to a typical Sam's Club.

By contrast, the new containers have flat tops and ridged sides, allowing for multiple stacking with a layer of cardboard in between each row and shrinkwrap around the outside to hold it all together. By eliminating the crates, no water is needed to wash them between deliveries, and no labor is required to return and wash the crates. After a single use, the cardboard and shrink wrap are recycled; by eliminating the crates, each truck can fit more milk -- the new containers store 4.5 gallons of milk in a cubic foot, versus 3 gallons in the old crate system -- so only two delivery trips are required each week, further cutting costs for fuel and labor needed. What difference does that make? "We're estimating it could be up to 11,000 trucks we're reducing on the road this year," said Daniel Book, marketing manager for Sam's Club.

So, it's a pretty great deal for Sam's Club, which can now store 224 gallons of milk in its coolers, in the same space that used to hold 80, and a good deal for dairies, who don't have to use as many resources or as much labor with the crate system. Though recycling replaces reuse -- something that TreeHugger isn't crazy about -- I can't deny the green benefits and am willing to give the idea a thumbs up. Plus, to top it all off, it saves consumers 10 to 20 cents per gallon of milk, and cost savings is what brings many shoppers in to the discount mega-stores. So why isn't everyone jumping up and down for joy? 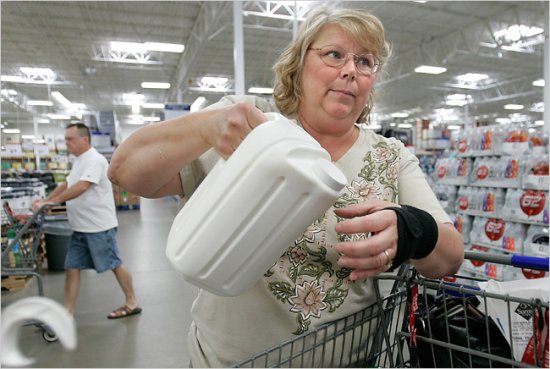 The new jugs pour differently than the old ones, and that has more than a few customers crying over their spilled milk (sorry, couldn't resist). "I hate it," said one Lisa DeHoff, a cafe owner, after buying the new jug in an Ohio Sam's Club. "It spills everywhere," said another customer, Amy Wise. Apparently, it's more of a "tilt-'n-pour" operation than the "lift-'n-pour" many are used to with the old jug. Is this a legitimate problem, or complaints just because something is a little new and a little different?

While my initial reaction is to say something like, "Hey, we just sent a lander to Mars (again!) -- the human race can figure out how to pour a gallon of milk without spilling it, so deal with it," I realize that change doesn't happen overnight. If Al Gore had his way, we would have had meaningful global warming legislation passed two years ago, right after everyone saw his movie (that will soon be an opera), and, yet, we wait (and that's a whole new story for a different day).

Anyway, the point is that, yes, sustainable innovations like these are worth a little spilled milk, if that's what it takes to cut 100,000 gallons of water use per day from a single dairy, or take 11,000 hulking milk trucks off the road each year. Plus, there's also the chance that the "Wal-Mart effect" -- the notion that they influence enough suppliers to change entire industries at the flip of a switch -- can be used for good, and that inefficient milk jugs will be a thing of the past everywhere, and not just at warehouse stores and mega-marts. It's big-picture improvements vs. small-picture inconveniences; with an entity as big as Wal-Mart, you can bet that the big picture is going to win every time.

Does this change the way you think about Wal-mart? Will stuff like this -- sustainable packaging vs. some consumer backlash --be good or bad for the green movement? Let me know what you think in the comments!

More milk jug and packaging design-related reading in TreeHugger
Gallon Milk Jug Gets Redesigned For a Low Carbon World
Forget the Jugs; Milk Bags a Hit in Canada, UK
How to Make Milk Jugs Lighter? Take the Handle Off