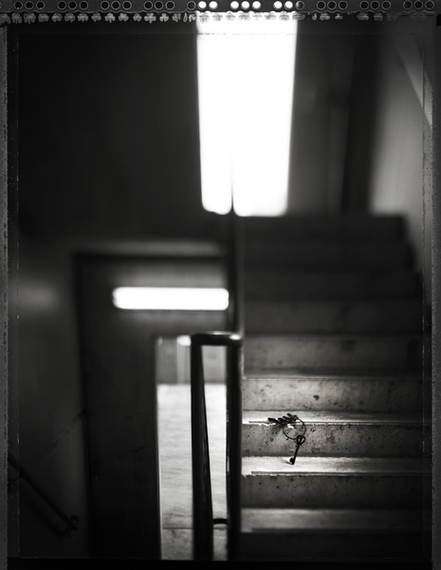 Fans of The Way We Were know this line as well as their morning coffee order and can instantly picture Barbra Streisand as Katie Morosky unexpectedly reuniting with her still-beloved ex, Hubbell (Robert Redford), outside the Plaza Hotel at the film's end.

Katie reaches to brush Hubbell's hair out of his eyes and he stops her, taking hold of her wrist tenderly, with a look of such regret, such palpable longing on his face that each time after watching it I must reach down and gather the piteous shards of my heart up off the floor.

"Why don't you come for a drink, Hubbell? Bring your girl."

Just kill me. Now. Am I even still breathing?

The film was a cinematic milestone for me: I can recite the dialogue word for word. I know the list of groceries that Katie rhymes off, curbside, to entice Hubbell to stay for dinner. I know the color of the teapot in her tiny apartment and in which scene she wears a hair snood.

It seems I've spent way too many afternoons of my life in darkened movie theatres when I should have been meeting writing deadlines. The upside is that I've amassed what now borders on an encyclopedic knowledge of film, dating back to the 1940s. Within this storehouse are moments that rise above the rest: Moments that have transfixed me, entranced me, endured.

My cinematic crème de la crème takes many forms. It may be one line of dialogue all on its own, or an entire scene's worth. It might be a look or a gesture from one character to another, or to no one in particular. It might be as simple as the quality of light the director captured at a window in early morning.

Let's take a look then at my Top Ten Treasured Movie Moments.

Michael (Robert De Niro) returns to his hometown, a decorated soldier. But he cannot face the welcoming party that awaits him at his trailer. He checks in to a motel room outside of town to collect himself. In the soundless scene he paces restlessly in his room. He suddenly presses the heel of one of his hands against an eye as if in tortuous pain. With his back to a wall, he sinks down on his haunches, wincing, still clasping the eye, conveying wordlessly the trauma he has suffered and now lives with.

2. A River Runs Through It

Reverend Maclean (Tom Skerritt) sits in his study in mid-afternoon in a melancholic light. A detective is telling him of the death of his beloved, reckless son, Paul, who had been killed over a card game the night before. While the father listens, the detective details the injuries that his son sustained, including to one of his hands that had been broken in several places.

I'll never forget the one and only question the father asks of the investigator, almost inaudibly:

The wife of the schoolmaster, Laura Reynolds (Deborah Kerr), is making a request to her much younger lover, one of her husband's students, following their sudden, passionate midday tryst.

Laying alongside one another on the grass, Laura turns to the young man and asks of him this, and only this:

"When you speak of this, and you will, be kind."

As an aside, my most-loved film version of this novel stars William Hurt and Charlotte Gainsbourg. For me it was those two actors who most fully embodied the Jane and Rochester that Charlotte Brontë had envisioned.

The unsurpassed moment for me here is when Jane speaks to Rochester one last time before leaving Thornfield Hall. It seemed in this scene Jane spoke the very words I yearned for her to express, especially the final sentiment. It was an uncanny feeling.

"Do you think that because I am poor, plain, obscure, and little that I am soulless and heartless? And if God had possessed me with beauty and wealth, I could make it as hard for you to leave me as I to leave you."

Frances asks him a question, a rhetorical one. Lange's exquisite delivery of the line invests it with all of her character's heartache.

Isak Dinesen (Meryl Streep) sits in her kitchen the evening before she parts from her lover, Denys Finch Hatton (Robert Redford). They both realize that they will never see one another again.

Dinesen asks a favor of Finch Hatton. She explains she has a curious habit, that when things are very difficult she takes them one step further until they are unbearable. Will he help her to do that by dancing with her one last time? Finch Hatton stands slowly, reluctantly, and the two of them come together for their final moments.

It is the final scene of the movie. "Clair de Lune," Debussy's haunting piece, is playing on the radio as the emotionally scarred characters go about the business of the morning. This follows a night of breaking up and making up and the two of them finally coming together, if tenuously. The early morning light comes through the brownstone window while Frankie (Michelle Pfeiffer) sits on the ledge looking out at the new day, brushing her teeth, smiling slightly. The music plays on.

In this overlooked little treasure, Peter Riegert plays Sam Posner, a pickle salesman on the Lower East Side of Manhattan. He is trying to woo the lovely Isabel (Amy Irving), but without much success.

Isabel has said something a little less than flattering about Sam's station in life. He fires back with something so brilliant, so succinct, it imprinted itself on me from that moment on.

"I sell pickles! Do you think that defines me?"

In this harrowing film set in the Great Depression, the line of dialogue that electrified me was in the scene where Gloria (Jane Fonda), an unemployed actress, stands with Robert (Michael Sarrazin) on a boardwalk by the ocean. They are both exhausted, on a break from the grueling dance marathon they are trying desperately to win.

Gloria tells Robert she's given up on acting. She says she is unable to get parts unless she goes through the impenetrable "Central Casting Agency." He suggests there must be other ways.

Sounding utterly defeated, she looks out to sea and says, simply, heartbreakingly:

Emma (Debra Winger) is in her hospital bed close to death, dozing on and off. Her mother (Shirley MacLaine) keeps watch. Emma awakens suddenly, sees her mother, and delivers to her a look that has within it regret and sadness, love and longing.

It contains within it every one of those emotions.

I will never forget it.