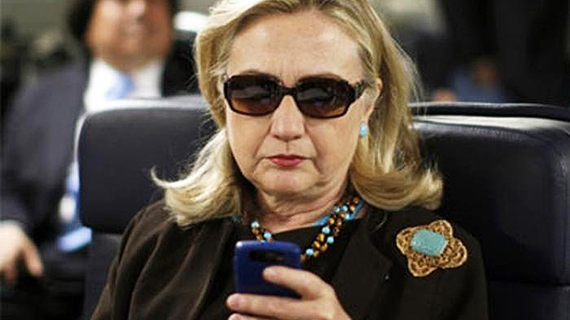 Are the Democrats about to do what the Republicans did with Bob Dole in 1996 and with Mitt Romney in 2012? Lose a winnable Presidential election by nominating the candidate who's "next in line," but isn't much liked by the voters? That could well be the case with Hillary Clinton or, worse yet, with Joe Biden.

Ask yourself this: Are there very many people, outside of Emily's list, who are really excited about Hillary for President? True, she has substantial, but shrinking leads among Democrats in national polls against Bernie Sanders, but in the early battleground states of Iowa and New Hampshire, she's only slightly ahead, or even trailing, the Vermont democratic socialist.

It seems that nationally, a majority of Democrats are saying they support Hillary more out of inevitability than true enthusiasm. And what does that indicate about a high Democratic voter turnout in the general election -- which would be necessary for Hillary to win -- if even loyal Democrats are lukewarm to her candidacy?

Bernie Sanders has had 20,000-30,000 enthusiastic supporters show up to rallies in Seattle, Portland and Los Angeles. Even though Donald Trump only half-filled an Alabama football stadium, over 20,000 people turned out. And of course cable news, even so-called "liberal" MSNBC, is all Trump, all the time.

Hillary hasn't held any mass rallies, preferring instead to meet behind closed doors with wealthy donors, or in small, carefully controlled encounters with voters, while holding the media at bay. Is it because Hillary and her handlers fear that if she tried to hold mass rallies, fewer people would show up than for Sanders or Trump, thus embarrassing Hillary and taking even more air out of her sluggish campaign?

On the Democratic side, while over a third of the voters in these three swing states don't know enough about Bernie Sanders yet to have an opinion, of the two-thirds that do have an opinion, twice as many find him honest and trustworthy as don't. And while still largely unknown to a wide swath of voters, in swing state match-ups against leading Republicans, Sanders polls only 3%-4% lower than Clinton.

If Hillary's poll numbers show her as increasingly unelectable, and Sanders -- who has less name recognition at the this point -- runs almost as well in match-ups with Republicans, then the argument that Democrats should shun Sanders because he's less electable than Hillary, even if they like him and his positions better than Hillary's, begins to evaporate. And in a Presidential election where turnout may be the key, Sanders may have a better chance at rallying the Democratic base to vote than a Hillary Clinton who won the nomination out of voter exhaustion.

So, enter Joe Biden? Really? Is there any grassroots groundswell calling on Biden to run? I sure can't hear it. It seems like the biggest fans of a potential Biden run are political journalists looking to cover a more exciting horse race, and some Democratic insiders who look at the same polls as cited above and want an establishment insider -- any insider -- to be the alternative to Hillary rather than Sanders. It's almost as though they'd rather lose the election with Biden -- which would still maintain control of the Democratic party by the establishment Party elite -- than to win with Sanders.

And Democrats would almost certainly lose with Biden. It's hard to think of a national Democrat, other than Biden, with a worse chance to win the Presidency than Hillary.

Biden first ran unsuccessfully for the Democratic Presidential nomination 27 years ago in 1988. He tried again 20 years later in 2008. Both times, he got little traction and dropped out early. Nothing about Biden's personality reads as presidential.

Not that the Republican side is any more inspiring, but it speaks volumes that the only potential Presidential candidates of national stature the Democratic establishment can come up with are Hillary Clinton and Joe Biden.

That neither party can come up with a candidate who inspires hope and confidence gives credence to the distain so many Americans across the ideological spectrum have for the political establishments of both parties and the wealthy donors who back them. 2016 could be a low turnout election driven more by the fear that each party's base has of the other party's candidate, than out of any enthusiasm for their own party's candidate.

The Iowa Caucuses are five months away, and the general election is 14 months away -- an eternity in politics -- so anything can still happen. But Hillary Clinton has been on the political scene so long, that most voters' views of her are already baked into the cake. The email controversy only has legs because it plays into the narrative that the Clintons think the rules that apply to ordinary citizens don't apply to them and that they're less than aboveboard.

A couple of interesting fantasy scenarios. Bernie Sanders comes runs a close second in Iowa and defeats Hillary in New Hampshire. At that point, Elizabeth Warren -- who represents many of the same views as Sanders, but has a more likable personality -- jumps into the Democratic race. That's a bit like 1968 when Eugene McCarthy came in a close second to LBJ in New Hampshire and Bobby Kennedy -- who would almost certainly have defeated Richard Nixon if RFK hadn't been assassinated -- jumped into the race.

With a compressed primary schedule and exponentially more money needed to run than in 1968, that would be a more difficult jump for Warren than for RFK. But with her strong popularity and name recognition, it might not be out of the question for her to jump in, defeat a weakened Hillary Clinton for the Democratic nomination, and defeat a Republican who had moved too far to the right for the majority of American voters.

Perhaps Hillary's best chance: Donald Trump running as a third party candidate, as Ross Perot did in both of Bill Clinton's Presidential victories. Let's say that Trump garners about a third of the Republican convention delegates, a plurality in the large field, but not enough to secure the nomination. The Republican establishment unites around another candidate who is nominated instead of Trump in a brokered convention. In such a scenario, it's easy to see that Trump's ego might not allow him to step gracefully off the stage and he would take the third party route. While he would certainly take some votes from Hillary, he'd likely take more votes from the establishment Republican nominee, perhaps letting Hillary squeak in by a plurality of the popular vote.

Of course, a third party run by Trump raises an even scarier scenario. Let's say that Trump manages to win several states outright, causing no candidate to have a majority of the electoral votes. In that case, the House of Representatives chooses the next President. With Republicans likely holding a majority of state delegations, in part because of gerrymandering, they then choose the Republican. This would likely guarantee the Republicans control of the Presidency, Senate, and House, giving them to power to appoint more conservative Supreme Court justices, roll back Obama's regulations of greenhouse gasses, cut Social Security and Medicare, reduce taxes for the rich, and deregulate the banks.

Overall, Democrats have a lot to worry about if they anoint Hillary Clinton as their standard-bearer.