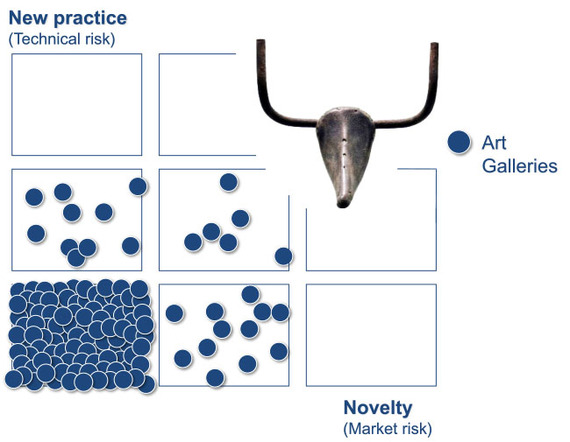 Architects, Fashion, Automotive, industrial and graphic designers alike often turn to the Arts for inspiration to create something novel. How innovative is the global art scene of today and is art still the best domain in which to look for innovative thinking?

"Bull's Head," a 1942 sculpture created by Pablo Picasso - marrying a bicycle seat to a handlebar, may not seem that innovative today. However, when first shown, it shocked the public leading to demonstrations and the piece had to be banned from the exhibit. "Bull's Head" redefined what art could be by applying ordinary industrial objects, in a new way. It was both a market and a technology innovation.

Ellen Dissanayake proclaims that art can be framed as a human propensity for "goal directed play," with the intent of "making objects special," and supporting a culture's ceremonies. As such, art has had an enormous power to dislodge old values, beliefs and attitudes though vivid imagery by telling thought provoking stories. As the old adage goes "A picture is worth a thousand words!"

While attending the L.A Art Show, 2015, I walked the floor for an afternoon enjoying wonderful art from across the globe. There were artists from South Korea, China, Africa, Europe and North America. While there, I recorded the overall innovativeness of the galleries' art pieces, according to the novelty of the ideas and if they incorporated new practices.

Art pieces that were incremental developments of existing art, represented eighty percent of the one hundred and thirty seven exhibitions visited. This is in the ballpark of the incremental innovation level found in the design of new products. Think in terms of the next smart phone, pickup truck or vacuum cleaner. Of the thousands of pieces of art that I enjoyed viewing, not one was breakthrough, meaning a novel idea and a new practice.

Some implemented new technologies, such as flat screens covered in paint, providing a juxtaposition of realistic moving images and abstract artistic expression. Other artists brought in the new current of terrorism into their paintings; something I have not noticed during the past five years of the show.

Most innovative was an Asian artist exhibiting specially mass-manufactured oversized plastic blow-molded candy. From the reaction of the visitors -- it was a big hit with the children and also the child within the rest of us, but for art critics, maybe not so much.

Art, with its relatively low manufacturing cost, represents an obvious avenue for experimenting with breakthrough innovation ideas and practices -- however it is far from a common occurrence. The trend in leading art seems now to be exploitation or sensationalism to gain attention though, shocking, offending or disgusting the general public. Think of the art piece "Piss Christ" by Andres Serrano, "Diamond Skull" by Damien Hirst and "Made in Heaven" by Jeff Koons.

What "Bull's Head" did for art 70 years ago may have, knowingly or unconsciously relied on the same sensationalism as today's sensationalistic art, however the innovation level was an order of magnitude higher.

Today's designers, of all stripes, who yearn to do more than just regurgitate old, tired ideas, may be better served by looking outside the art scene for their next earth shattering ideas. Perhaps they might even open their consciousness to the possibility of channeling the next cutting edge innovation themselves.