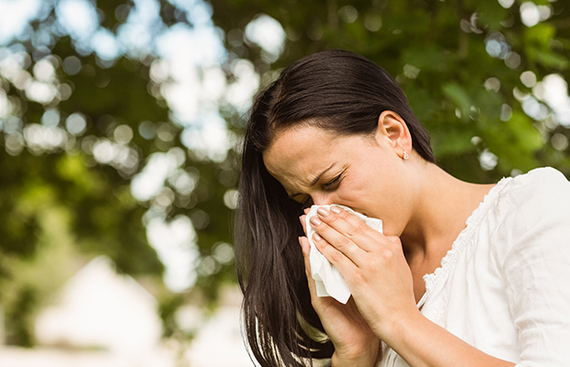 Fall is packed with some of our favorite things -- football (tailgating food!), marathons, all things pumpkin -- but it's also when allergies act up and cold season begins. Problem is, it can be tough to tell if you're coming down with something or if your sinuses are just revolting against changes in the weather. If you find yourself sniffling and aren't sure whether you need chicken soup and bed -- or new allergy meds -- don't sweat it.

"Unfortunately, the common cold and allergies share very similar symptoms, like coughing, sneezing and congestion," says Andrew Kim, MD, an allergist and medical director at Allergy & Asthma Centers in Northern Virginia. "Occasionally, it can even be difficult for doctors to diagnose between the two." However, most of the time, there are several telltale signs to pinpoint the culprit. We tapped Dr. Kim and Keri Peterson, MD, an internist at Lenox Hill Hospital in New York City, to help you take stock of your condition and devise your sneeze-free action plan. (However, keep in mind these are only general guidelines and should not replace advice or recommendations from your doctor or medical professional.)

Cold or Allergies? 6 Questions to Ask Yourself

A nose that won't stop running is a symptom shared by both allergies and a cold, says Kim, and it may be very difficult to distinguish which is causing it. But if you pay attention to the color and texture of your mucus (yes, ewww, sorry) and whether it changes, you should be able to gain insight into what's really going on inside. Allergies and the early stages of a cold generally produce thin, watery mucus, but "if it becomes thick and discolored yellow or green, it's possibly a respiratory infection," says Peterson.

Can't stop scratching your eyes, nose, throat -- or even your ears? That itchiness is often caused by allergies. However, this is not without exception: "Itchy and irritated eyes may also be caused by viral conjunctivitis (aka pink eye), which is associated with the common cold." An antihistamine or decongestant should help, and it should clear up within two weeks, but always check in with your doctor first.

3. Do you have aches and pains?

Think about it: Is pain localized around your sinuses (yes, your face could hurt -- not just your head), or is your whole body in on the suffering? Sometimes, a low-grade fever, swollen glands and/or uncomfortable aches all over your body can accompany colds, says Kim. Another place to look out for pain? Your throat. You might experience itchiness here from an allergen, says Peterson, but, "a sore throat is common with a cold and almost never occurs [from] allergies."

4. How quickly did it hit you?

If you suddenly feel bombarded with watery eyes, mucus or congestion out of nowhere, you're likely not suffering from the common cold. "Symptoms of a cold are gradual in onset while allergies are sudden," notes Peterson. Either way, try eating one of these seven foods to help reduce cold-like symptoms and boost your overall immunity.

5. How long have you been feeling bad?

Colds typically run their course within two weeks, sometimes lasting only a few days. On the other hand, says Peterson, allergic reactions can linger for as long (or as short!) as you are exposed to the allergen, like dust or ragweed. (Plus, allergies can lead to feeling exhausted, fast -- never a good thing if you need to be feeling your best.)

Allergies tend to pop up during the change of seasons, specifically in the spring, summer or fall, while colds are tend to come on in the winter months -- though under-the-weather season can extend from September to March, says Kim. "If you notice that your symptoms occur the same time every year, they're likely caused by allergies," says Peterson. If your symptoms also act up primarily when you're in a certain place (like your office or a friend's house), a reaction to an indoor allergen like mold or dust may be to blame.

Still feeling clueless -- and a bit sniffly? See your doctor or book an appointment with an allergist to help figure you why you're feeling under the weather.

More from Life by DailyBurn:
How This Man Lost 100 Pounds, One Small Change at a Time
Will Apple Cider Vinegar Really Help You Lose Weight?
6 Signs That You're Exhausted (Not Just Tired)