First, my mother. Now, my cat.

I had no idea cats could get breast cancer until a couple of weeks ago when I felt a lump on Cleo's tummy. It'd have to come off, the vet said, and there was a good chance it was malignant.

Deja vu to not quite a year ago when an oncologist told Mom the same thing.

The medical ritual for my cat was almost the same as it had been for my mother: first blood work, then exploratory surgery to see if there were more tumors, and if there were, more mammary tissue would have to come out. Then came the big wound with lots of sutures that needed to be monitored for infection, the bruising and pain, and a week's wait for the pathology to come back, telling us how advanced the cancer was. 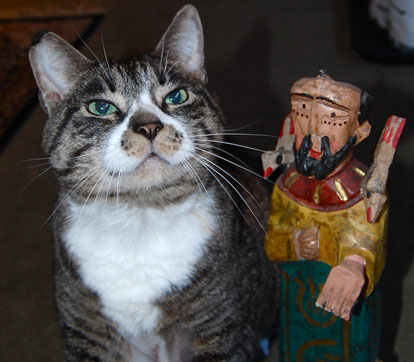 My personal ritual for dealing with Cleo's frightening diagnosis echoed my response to Mom's diagnosis. I cried, I worried, I got a little angry and I prayed a lot.

Just as I had when Mom got the news last fall, I put up a post on my blog asking people to pray for Cleo. And just as they had with my mother, lots of people said they would.

A friend saw my blog post about Cleo's surgery and asked a theological question I had not anticipated: "Are you allowed to pray for a cat?"

My immediate response was, "Of course." God cares about all of God's creation, including kitties, I told him.

But his question got me wondering what my own faith tradition and others really say about animals and prayer.

As I began my research, one man's name came up repeatedly: the Rev. Andrew Linzey, an Anglican priest and professor of theology at Oxford University in England. Linzey, director of Oxford's Centre for Animal Ethics and author of a number of important books on the subject of theology, ethics and animals, is the world's pre-eminent "animal theologian."

"Praying for animals may appear a lost cause within Christianity, but in fact there are blessings for animals as far back as the Rituale Romanum of 1614," Linzey said, referring to a text of Roman Catholic rituals, including blessings. "There is a great deal in the Bible that supports the compassionate treatment of animals."

In the biblical Book of Genesis, God establishes a covenant with all living creatures, and in the New Testament, St. Paul alludes to animals being redeemed (along with humans) in his Letter to the Romans where he compares "the groans of creation to the pain of childbirth and creatures awaiting their redemption in Christ," Linzey said.

"Redemption is clearly a cosmic thing," Linzey said. "Since animals are going to go to heaven, there can be no good reason why we shouldn't pray to God for them."

While there is no consensus among religions as to whether animals have souls and afterlives -- most Christian, Jewish and Muslim theologians say animals have souls but not the kind that live on after their bodies die like humans do, while practitioners of Hinduism, Buddhism and other Eastern traditions are more inclined to believe animals and humans belong to the same soul cycle of reincarnation -- each has something to say about the care and kind treatment of animals. (One interesting bit of trivia I came across this week was that Islam's Prophet Muhammad is said to have been especially fond of cats.)

In the history of Christianity, there are many examples of prayer for animals. Perhaps the best known is St. Francis of Assisi, patron saint of animals, whose feast day Oct. 4 is marked in some traditions with an annual "blessing of the animals," where congregants are invited to bring their pets and/or livestock to church for prayers of protection.

It is said that St. Francis loved animals so much he referred to them as "brothers and sisters" and once gave up his hermit's cave to a donkey. He is often depicted with birds sitting on his shoulders, and one hand extended to feed (or bless) them. The carved wooden folk art statue of St. Francis I keep in my living room has a bird on each shoulder and what is either a large spotted cat or small Holstein at his feet.

A common Franciscan prayer for animals says, "Blessed are you, Lord God, maker of all living creatures. You called forth fish in the sea, birds in the air and animals on the land. . . . We ask you to bless this pet."

I am thrilled to report that both my mother and my cat are doing very well. Both, doctors believe, are now cancer-free. And after radical surgeries -- Mom had a double mastectomy last December and Cleo had all of her mammary glands removed on the left side of her body last week -- neither has to endure radiation or chemotherapy.

This morning, Cleo gets the stitches from her footlong incision removed. She's already pretty much back to her frisky self, so much so that in roughhousing with her younger sister, Mousie, earlier this week she knocked over St. Francis and broke his thumb.

Nothing Superglue and the power of prayer can't fix.