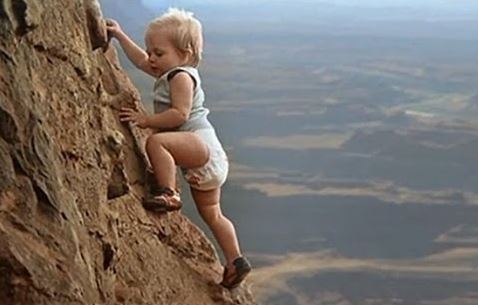 Any time you have outside of sleep and work should pretty much be spent with your kids, right? Parenting is a time to get your shit together, put away the toys and whittle down the hours you used to spend in your twenties doing stuff that, in your thirties, now seems selfish at worst, or at best juvenile.

Not so. This is a recipe for disaster.

Now, you've got some issues. It just so happens these issues have names, personalities and, well, they are here because of something you did. These issues also have demands, certain ways of doing things and insist on "doing it themselves" despite a 100% projected failure rate, and yet, they lean on you exclusively -- the plural "you" of parents or guardians -- as to how to navigate the world before them. They are helpless.

Why are children "issues"? Because we're busy doing the things we love and they get in the way. Children take time, a lot of time, a lot of my precious time and the world's valuable time. Even the world's resources for that matter. I bet 250 million gallons of gas were wasted yesterday alone on idling cars with parents waiting for their toddler to find their way out of the front door and into the car seat. This amazing phenomenon alone has contributed, in a significant way, to global warming. From spilled milk alone Eritrea could gather a day's worth of calories and countless cows have had their utters needlessly yanked.

Children are issues not just for selfish parents, but parents with a passion. For me, climbing is a passion -- it has been my raison d'etre for the majority of my conscious life, beginning around thirteen, and remains so today. But, of late, I've stumbled into familiar parenting territory -- is it selfish to spend less time with your kids so you can pursue your passion? On the surface of it, it sounds crass, as in "Seriously, you value your own weird little pursuit over that of raising the future generation??!!!" What an asshole.

Absence can be presence, and parenting is a strange thing. Do you remember a time when someone didn't show up for something you considered really important? Of course you do. It was a defining moment. Well, that wasn't the best example, but every time I get home from a climbing trip, my kids asked me how it was, what it was like, can they come next time, and so on. They tell me they too want to be climbers.

My absence is memorable to them, and my daughter is acutely aware that I chose "climbing over her." She grinned when she said that, but it's a direct quote. All the better. Why do I say that? Having a passion instills the sense that life has a telos -- ultimate aim or purpose -- and that it isn't just eat, shit and breathe. It's about vitality. Your kids learn you live for something they don't comprehend, and that must be humbling. Humility is good. You give them this telos by performing it, believing in it yourself. Of course, make sure you give everyone else, such as your partner, equal time to nurture their passions as well.

Parenting, as much as anything -- and I would argue more -- forces you to experience time differently. Time, like the things in it, actually changes. Everything becomes more urgent, because it goes quicker, mainly because you are distracted and wiping asses and counting down from five all the time. You would think counting down from five so much would actually cause time to slow down, but the laws of physics don't apply in this case.

Because you are also forced, by the same token, to consider how you have spent your time up until this point -- and trust me, you've wasted a shit ton of it -- a passion becomes even more crucial to cultivate since one can't waste time while pursuing a passion. That's what I've come to realize defines a passion -- something you do that isn't a waste of time to all relevant parties. An absolute glorious little gem it is. If you come back healthier, less burnt out and more present, and you are more willing to pass the baton to the other person, then all the better. A strange thing happens to two time-starved, stressed out parents - they become less willing to give the gift of time to the other person. Or, when it is given, it is given with resentment. It's not personal, but merely an effect of being in the trenches.

Kahlil Gibran once said of children, "They come through you but not from you, and though they are with you yet they belong not to you." You would do your children well to shoot them off in the right direction by being a shooting star yourself, and since they do not belong to you, you should not consider yourself a possession of them. Once you do this, you are a willing, and joyful, parent -- a thing out of which another thing has developed. That thing you are developing, however, is not just a child.