Here are the facts.

By Nina Bahadur, SELF 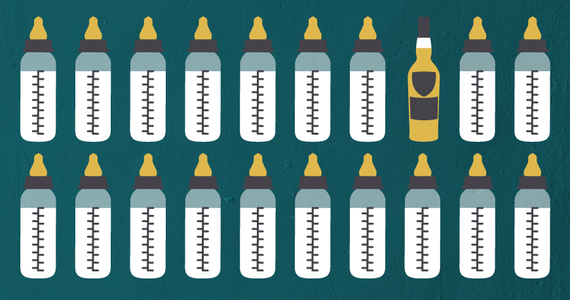 Image: Jocelyn Runice for SELF

On Feb. 1, the CDC released new guidelines urging women of childbearing age to avoid drinking alcohol unless they are using contraception. This new guideline is designed to prevent fetal alcohol spectrum disorders (FASD), which are caused by a fetus being exposed to alcohol in utero. FASD is a 100 percent preventable condition.

According to the CDC, more than 3.3 million U.S. women are at risk of exposing a developing fetus to alcohol because they drink, are sexually active, and don't use birth control and are therefore at risk for an unplanned pregnancy. Furthermore, three in four women who would like to get pregnant as soon as possible report drinking.

"Alcohol can permanently harm a developing baby before a woman knows she is pregnant," Anne Schuchat, the principal deputy director of the CDC, said in a statement. "About half of all pregnancies in the United States are unplanned, and even if planned, most women won't know they are pregnant for the first month or so, when they might still be drinking. The risk is real. Why take the chance?"

This recommendation is the latest of many moves to educate women about FASD. For instance, all alcohol bottles are labeled with a government warning about drinking during pregnancy, which was made mandatory by the Alcoholic Beverage Labeling Act (ABLA) was passed in 1988.

In the 1980s, physicians who had once advised pregnant women that they should have a couple of drinks to relax, or prescribed alcohol drips to stave off preterm labor, were realizing that exposure to alcohol could be extremely harmful to fetuses in utero. Alcohol is a neurotoxin that can be freely passed from the mother to a fetus through the placenta, harming development and in cases causing structural abnormalities in the brain.

Kathy Mitchell, a young mom who binge drank while pregnant with her second daughter in the '70s, recently shared her story with SELF. Her daughter Karlie has severe FASD and at age 43 has the intellectual capacity of a first-grader. Mitchell simply did not know that alcohol could be harmful to a fetus, and stresses the importance of educating women, their partners, and their doctors about the risks.

There are many myths and misconceptions surrounding alcohol use during pregnancy. SELF spoke to the experts, and they answered some common questions for us. Here's what they had to say.

Is it safe to drink while pregnant?
In October, the American Association of Pediatrics stated definitively that no amount of alcohol is considered safe to consume during a pregnancy.

"The research suggests that the smartest choice for women who are pregnant is to just abstain from alcohol completely," Janet Williams M.D., F.A.A.P. said in a press release.

Michael Charness M.D., a neurologist and the scientific director of the National Institute on Alcohol Abuse and Alcoholism (NIAAA)-funded Collaborative Initiative on Fetal Alcohol Spectrum Disorders, states that drinking during pregnancy in no way ensures that a child will be born with FASD, but that the exact risks are so unknown that complete abstinence from alcohol is advised. In other words, so little data is available that there is no way to establish a "safe" amount or time to drink -- if one even exists.

Wait. But is having a single drink here or there while pregnant REALLY going to be a problem?
Anecdotally, plenty of women have had an occasional glass of wine during pregnancy and their kids have turned out just fine. But doctors stress that there's really no way of knowing how much alcohol is harmful or whether it's safe to drink at any given point in a pregnancy. No studies have been done, for obvious reasons. So, once again: It's better to be safe than sorry, and avoid drinking altogether.

What is Fetal Alcohol Spectrum Disorder (FASD)?
FASD is characterized by behavioral and cognitive problems, which are caused by structural abnormalities in the brain.

For children with FASD, Charness explains that: "Development does not proceed as it should. Milestones may be delayed, they may struggle in school. They have difficulty with executive function, planning and impulse control. There can be attention deficit disorders. Acting out. Difficulty with social interactions. Trouble with learning and memory, especially in math."

In severe cases, usually linked to the fetus being exposed to alcohol between 19 and 21 days of gestation, facial malformations are visible including a lack of the groove underneath the nose, a shortened distance between the inner and outer corners of each eye, a thin upper lip and a smaller-than-usual head size.

Is there a test for it?
Testing for FASD is not available in utero, and Charness admits that it is "difficult to diagnose even at birth." In order to diagnose FASD, physicians look for facial abnormalities, growth problems, central nervous system problems, and confirmation that the mother used alcohol during her pregnancy.

Is there a cure for it?
FASD has no cure, but Charness stresses that early diagnosis and prevention can improve outcomes for affected children.

How common is FASD?
Christina Chambers Ph.D., M.P.H., a professor of pediatrics at UCSD and Director of Clinical Research for the Department of Pediatrics at UCSD and Rady Children's Hospital, is studying the prevalence of FASD. She tells SELF that, in some communities, 2 to 4 percent of first-grade-age children have FASD.

"It is difficult to get a handle on how common it is," she tells SELF. "It's hugely under-recognized."

Charness says that in some parts of the U.S., the percentage of children affected with full-blown, severe FASD could be as high as 5 percent.

"That makes it as significant a problem as autism, and probably the most common cause of developmental disability in the U.S.A." he says. " But it does not have that recognition."

Is it safe to drink while trying to conceive?
Experts don't recommend this. As we mentioned above, the CDC just released new guidelines that say that women shouldn't drink if they're not using birth control of some sort. For those planning to stop contraceptive use in order to conceive, Charness says, "You should not drink at all."

What should you do if you have unexpectedly become pregnant and intend to go through with the pregnancy, but may have been drinking before you realized?
Step one: Don't panic. Step two: Stop drinking.

"Take the usual prenatal vitamins, be attentive to diet and health," Charness advises. "Bear in mind that although women should not drink at all during pregnancy, some who drink heavily throughout do not have FASD kids. It's not universal, it's not an inevitable outcome. The less someone drinks during pregnancy, the less likelihood there will be a problem."

What if you struggle with substance addiction?
Don't be ashamed to ask for help. Addiction is a serious disease. Reach out to a healthcare provider who can refer you to an addiction specialist, rehab, or other services. National helplines like the Substance Abuse and Mental Health Services Administration line may be able to assist.

What's the bottom line?
While the new CDC guidelines can come across as paternalistic, the experts stress that abstaining from alcohol when there is any chance you might be or become pregnant is the only way to ensure a child will not be born with FASD.

"Obviously the take home message is, if you drink, avoid pregnancy," Chambers says. "If you are going to become pregnant, don't drink."

To be clear, FASD is by no means a fatal diagnosis. Children with FASD can lead full, happy, and productive lives. But while Mitchell adores her daughter Karli, she says the guilt of knowing she caused her daughter's limitations will always weigh on her.

7 Steps to Eliminating Your Dark Undereye Circles For Good

More:
healthy livingHealthalcoholPregnancydrinking while pregnant
Newsletter Sign Up
An essential daily guide to achieving the good life
Subscribe to our lifestyle email.
Successfully Subscribed!
Realness delivered to your inbox