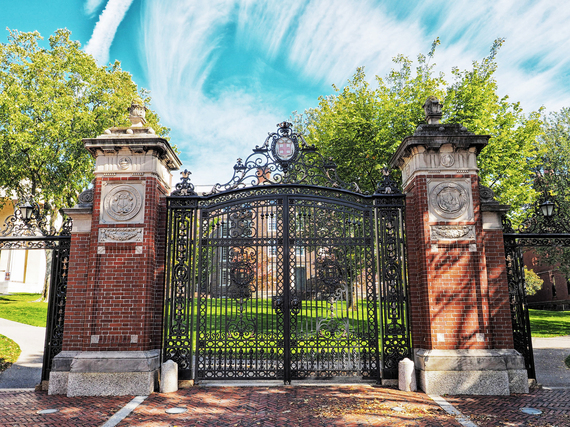 Image Credit: By own work (http://www.paintingwithlight.xyz/architecture/)


Grade inflation was back in the headlines last week when the long-overdue updates to a popular grade inflation database were finally released.

We're taught early on that grades typically fall along a bell-shaped curve where a few people do poorly, a few do very well and most fall somewhere in the middle. It's why we think of C-grades as "average." So it's more than a bit surprising when data covering roughly a million students shows that instructors at the schools in this sample gave out A-grades to some 42 percent of students and B-grades to another 35 percent.

Three out of every four grades being good or excellent doesn't give you a bell curve, it gives you a black-diamond ski slope.

We could possibly accept that the distribution has changed over time if we could buy that the average person is just getting smarter. Unfortunately there's enough federal education data out there that contradicts this. There's also pretty compelling data showing the time students spend outside of class on academic preparation is almost half of what faculty members believe and expect they should be doing.

It's important not to confuse grading distributions with grading flexibility. On the heels of the very first exam I ever took in graduate school we were told that among a group forty students, the best student only managed to correctly answer 70 percent of the problems and the median score was a gut-wrenching 54 percent. Eventually they told us that the exam was designed to be especially difficult in order to help the program faculty identify those that were truly exceptional amongst a group of arguably smart students.

Yet even in this case where we ended up being graded on a very generous curve, the distribution between weak and strong students still followed bell-shaped expectations. It's when grading practices become inconsistent with that reality and there's no good data to support it that eyebrows start to raise.

As the saying goes, when everyone is special, nobody is.

There isn't clear consensus on what's driving grade inflation, which has made the search for scalable solutions equally difficult. Cornell experimented with publishing the distributions of class grades in the hopes that both students and employers would identify and avoid grade-inflated classes. That ended as expected when students actually flocked to, rather than avoided, such classes. Princeton ran a "grade deflation" policy for nearly a decade that capped the number of A-grades awarded at 35 percent, until an ad hoc committee exploring the issue advocated against it and the faculty committee on grading voted it away.

What hasn't gotten a lot of attention in grade inflation discussions is that the person who offers the service ultimately determines whether it was done well or not. Instructors will tell you they're in the best position to assess the extent to which content they're presenting is being mastered. At the same time, they're also the first to be accused of poor teaching when too many students - many paying tens of thousands of dollars in tuition and fees each year - don't meet learning expectations.

That's a problem. Once grade inflation begins, just as the data shows, we'd expect it to escalate into an inflationary arms race since instructors have no economic incentive to revert to more stringent grading standards. In relative terms any effort to combat inflation just ends up being a signal of bad teaching.

The situation's made worse by the expectations of students and families paying record amounts for a college education. It's also being made worse by the large and growing percentage of instruction done by adjuncts and graduate students where poor teaching results could adversely shape their next career opportunity.

Put it all together and it's straightforward to see that letting instructors grade their own students has wrong incentives written all over it. It starts to feel an awful lot like what we'd expect if say gymnasts were allowed to score their own routines.

If grade inflation is the product of bad incentives and instructors playing too comprehensive a role in the education process then we should be able to curb the problem by simply splitting out who provides education from who assesses whether it's taken place.

A basic framework would let instructors at one institution teach and conduct exams while other instructors at the same or other institutions grade those exams. All that's really needed is common expectations on learning outcomes and instructor/program quality. At first glance this might seem like a high hurdle except colleges basically already do this through institutional credit transfer agreements.

Students' personally identifiable information would be stripped out and exams uploaded to a shared content management system. Instructors in the same discipline at either the home or an affiliated institution would randomly be assigned grading responsibilities. The United Kingdom utilizes a somewhat similar approach using external examiners.

Colleges would enter into bilateral grading partnerships or even consortia agreements with multiple, like institutions. They could also maintain generic question banks that instructors could utilize to make it more difficult for graders to determine which institution is conducting an exam.

Minor logistical issues would certainly emerge but the only thing that's essentially different from how things currently work is which instructor grades what. Exam grading loads could still apportioned the same way they already are and individuals would only grade in the areas they taught or had demonstrable expertise.

The obvious benefit to making grading blind is that it effectively removes the disincentives that currently discourage rigorous grading. Instructors wouldn't risk being penalized for stricter grading and randomizing assessment so instructors blindly grade some fraction of students at their own institution removes any perverse incentives to grade students at other institutions more harshly.

It's not a perfect system of course. It works much better with introductory and lower-level courses where the information learned is largely codified and less susceptible to analytical interpretation. External review and the possibility that a different person might review every exam also means that institutions would still want to find ways for instructors to value developmental progress.

Still, at the end of the day we expect on some level that an undergraduate degree in economics or physics or music should be similar enough at like institutions that cross-institutional grading should be a readily implementable task.

Grade inflation may not affect all students or all institutions evenly but that shouldn't stop researchers and policymakers from looking for solutions that help us better assess the learning that takes place in our higher education institutions.